The 2018 year of mainstage musical theatre actually began on New Year’s Eve 2017, when the opening night of Dream Lover (below) marked the return of the much-loved tradition of the Arts Centre summer musical. As crooner Bobby Darin, David Campbell’s lead performance won well-deserved acclaim, and the show filled the State Theatre for a very successful season. Another jukebox bio-musical followed, with Esther Hannaford winning further legions of fans with her starring role in Beautiful: The Carole King Musical.

The year’s lone commercial musical with an original score, School of Rock (top photo) pleased family audiences with its rock-based Andrew Lloyd Webber score. Further Lloyd Webber tunes were heard in the lively new London production of The Wizard of Oz, which featured a sprinkling of new Lloyd Webber songs amidst the well-loved classic tunes.

The year ended with the long awaited Melbourne return of Evita (below), the revered 40-year-old classic by Lloyd Webber and lyricist Tim Rice. The ticket prices for Evita may have been higher for its Sydney season, but the show arrived in Melbourne in much better shape, looking and sounding far grander in the State Theatre. Tina Arena’s unmissable performance as Eva Perón continues into 2019.

One of the Australian stage’s favourite sons, Tony Sheldon returned home to resume his legendary performance as Bernadette in the tenth anniversary tour of Priscilla Queen of the Desert. Fun-loving Melbourne audiences lapped up a third visit from Mamma Mia!, which had the distinction of starring of Natalie O’Donnell, the first local actress to play Sophie, now playing Sophie’s mother, Donna. The Melbourne season benefitted from extra ABBA-mania thanks to the timely release of the movie sequel, Mamma Mia! Here We Go Again.

Venerable Melbourne institution The Production Company celebrated their twentieth year with a terrific, star-studded revival of Oklahoma!, which marked the auspicious directing debut of Christopher Parker. Love Never Dies co-stars Simon Gleeson and Anna O’Byrne reunited to give memorable performances as Curly and Laurie. In August, Rohan Browne shone in the leading role in the return of The Boy from Oz. Fresh from a year as the toast of Broadway, Caroline O’Connor co-starred in The Boy from Oz as Judy Garland. Finally, the very welcome Australian premiere of Best Musical Tony Award-winner A Gentleman’s Guide to Love and Murder starred Mitchell Butel in no less than eight madcap roles.

Melbourne was treated to some smaller scale seasons in city theatres. Green Day’s American Idiot the Musicalbrought a high-octane energy to the Comedy Theatre, but suffered a little due to its uneasy fit of musical theatre and rock music. Madiba the Musical told the noble story of Nelson Mandela with a talented, diverse cast. The new musical, originally staged in France, lacked a little polish but contained plenty of heart.

Having begun in Sydney, the pocket-sized production of Calamity Jane won hearts in Melbourne, chiefly, but not solely, due to the joyously radiant lead performance of Virginia Gay. With enough energy emanating from its terrific young cast to light a stadium, Bring it On the Musical (below)slipped surreptitiously into the Athenaeum Theatre. Featuring interpolated songs by none other Lin-Manuel Miranda, the teen-oriented musical could have been a big local hit if it had been give the chance to catch on. 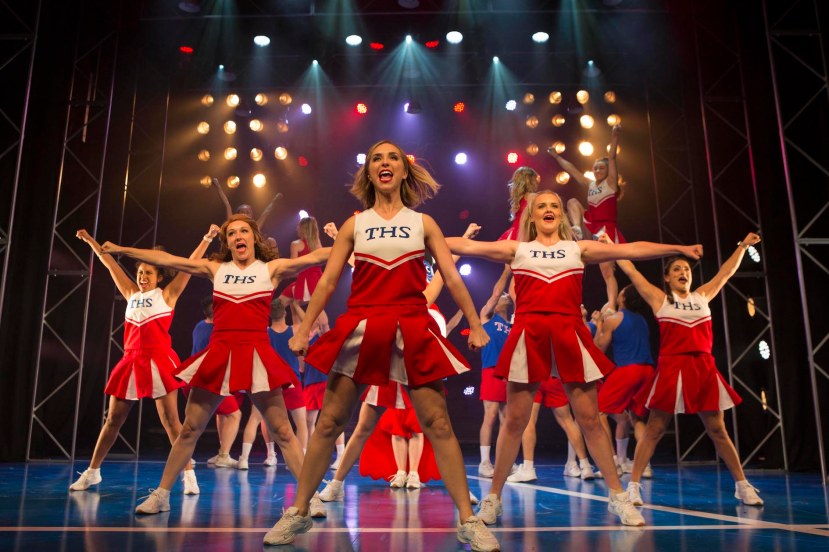 In a disappointing move that pretty much represents the death knell for the Melbourne independent musical theatre scene, prolific local company StageArt announced that 2018 would be their final year. The outfit has given Melbourne premiere or rarely seen shows with diversity of casting that left commercial producers in their shadow. Tender chamber musical Falsettosopened StageArt’s year, followed by another gay-themed show, Bare the Musical. Finally, a scaled down production of Nine the Musical brought Maury Yeston’s gorgeous music back to Melbourne.

Local Sondheim repertory company Watch This presented the ever-charming A Little Night Music. The best efforts of a talented cast and crew could not rescue the shipwreck that was Gilligan’s Island the Musical. A boutique season of Tomfoolery reminded audiences of Tom Lehrer’s delectable wit. A terrific young cast and sharp direction made an independent staging of Rent a smash hit.

Melbourne musical theatre fans love a good concert, and this year saw a generous selection. West End heartthrob Ramin Karimloo performed in concert with special guest, Melbourne’s own Anna O’Byrne. The love flowed back and forth across the footlights as Patti LuPone presented her concert Don’t Monkey with Broadway. Fellow Broadway legend Mandy Patinkin took a different angle in his concert Diaries 2018, which featured new and unusual material for the gifted singer.

Prolific Sydney company / venue Hayes Theatre continued to program appealing, intriguing musicals with top casts. In visits to Sydney, Man in Chair was lucky enough to see Blue Saint’s In the Heights (below), and was thrilled to see Blazey Best in Gypsy. The ones that got away included Cry Baby, She Loves Me and Aspects of Love.

Man in Chair’s annual visit to London began with National Theatre’s acclaimed revival of Follies (below). What a blessing to musical lovers around the world that Follies was shown in cinemas. This very welcome trend continued with screenings of An American in Paris, Funny Girl, Everybody’s Talking about Jamie and The King & I. The trend continues, with West End productions of Kinky Boots and 42nd Street already filmed and ready for screening in 2019. 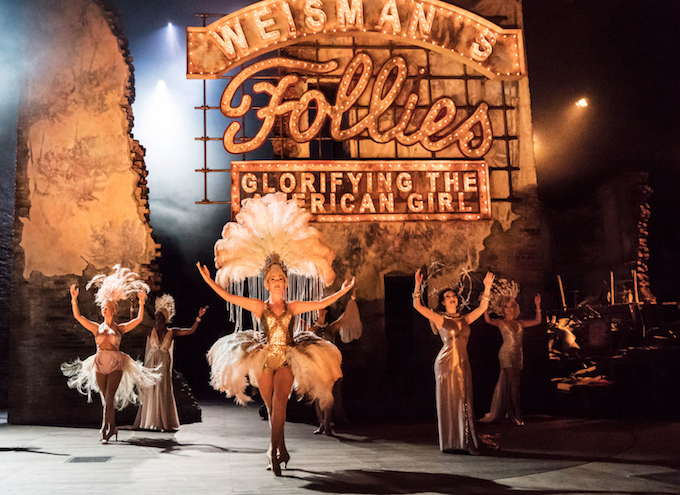 Delivered straight to the West End from its regional premiere in Sheffield, Everybody’s Talking about Jamie (below) proved to be the year’s success story. Off-West End musical Bananaman the Musical did not quite meet expectations of its built in audience. Quirky Bob Dylan play-with-songs Girl from the North Country was widely hailed, yet its absence of sets and downbeat style left Man in Chair cold. Even with all the resources of National Theatre, blue chip title Pinocchio was a dull, meandering flop. 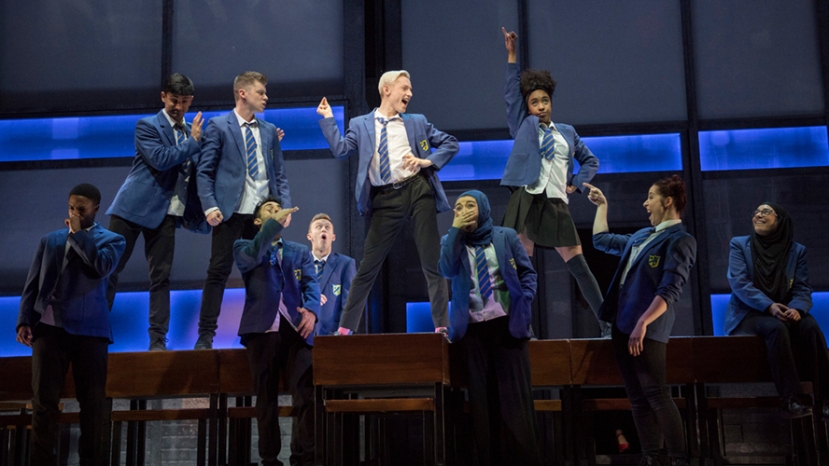 Transfers from Broadway included the pristine West End premiere of Hamilton, a scaled down but very funny production of Young Frankenstein and the long overdue West End season of the 2001 Broadway revival of 42nd Street.

An off West End revival of The Woman in White highlighted the beauty of Andrew Lloyd Webber’s melodious score, and provided an ideal role for Australian actress Anna O’Byrne. The traditional Menier Chocolate factory winter musical was a dud this year, with Marcus Brigstocke not up to the task of playing the lead role in Barnum.

Visiting New York in April, it became obvious that the economics of Broadway have impacted the current selections. New musicals either need to a strong movie source or a broad pop catalogue for the score.

Movie adaptations varied from the lively wit of Mean Girls (below) to the dreary self-importance of Frozen. The high budget of SpongeBob SquarePants the Musical was seen in its lavish staging. The rare adult-oriented musical, Tony Award winner The Band’s Visit exuded understated charm as it expanded on a little known art-house movie to mesmerising effect.

Touring production Rocktopia was a ludicrous waste of a Broadway theatre, and Man in Chair could not even bring himself to attend Summer: The Donna Summer Musical nor Escape to Margaritaville (the Jimmy Buffett musical). Go-Go’s musical Head over Heels opened later in the year, as did a poorly received adaptation of Pretty Woman. Having opened in October, it is a little too early to tell whether Australian musical King Kong will be taken down by its reviews or live on to become a popular hit.

The Broadway revival of Once on this Island enjoyed a vibrant, immersive staging. Cherished musical Carousel returned with a starry cast and incredible choreography. The resources of Lincoln Center and the imagination of director Bartlett Sher and team made for a lavish, re-thought staging of Golden Age gem My Fair Lady.

Emerging stars on the Australian musical theatre stage were almost all found in Bring it On the Musical, in which Nichola Bowman, noted as one to watch in 2017, was joined by Samantha Bruzzese, Nadia Komazec and Marty Alix. Bruzzese went on to give a luminous performance as Mimi in Rent. Komazec played in Rocky Horror Show and can currently be seen as Patty in School of Rock. Alix was adorable as Sonny in In The Heights, and subsequently followed his role as transgender teen La Cienega in Bring it On the Musical with an angelic performance as Angel in Rent.

Rounding out the list of emerging stars is Maxwell Simon (below, right), who reprised his breakout role of The Balladeer / Lee Harvey Oswald in Assassins in its Sydney Opera House season this year. Simon was part of the ensemble cast of Green Day’s American Idiot, and gave a tender, memorable performance as Greg in The Boy from Oz. Simon will be seen in 2019 in the Australian tour of Muriel’s Wedding the Musical.

Michael Ralph had a successful year in 2018, not just continuing to shine as a creative, respected choreographer with Bring it On the Musicaland The Boy from Oz, but also breaking out with his debut as a director / choreographer on Nine the Musical (StageArt).  Future occasions for Ralph to perform these double duties are highly anticipated.

A star of a different kind this year was Melbourne’s Her Majesty’s Theatre itself. The 132-year history of “The Maj” was honoured with an incredibly lavish coffee table book The Shows, The Stars The Stories by devoted theatrical historian Frank van Straten.