Melbourne has waited all year for a big budget original musical, and School of Rock is a welcome reward. Lavishly produced and impeccably cast, the Australian season is set to exceed expectations and leave family audiences on a giddy high.

Following the recent trend of screen to stage adaptions, School of Rock benefits from rosy affection for its source material yet is not bound up in slavishly recreating key characters and quotable lines of dialogue. Rather, the musical has a joyous, independent life of its own, the live music from the extraordinary cast of children providing additional excitement that is only to be found in the theatre.

Returning to his electric guitar roots, Andrew Lloyd Webber abandons turgid melodrama to deliver his catchiest tunes in decades. The show takes flight with “You’re in the Band,” the best song about children discovering music since “Do Re Mi.” “Stick It To The Man” is a toe-tapping earworm, while “If Only You Would Listen” brings instantly accessible poignancy. A long-term devotee of pastiche, Webber pens hummable school anthem “Horace Green Alma Mater” and rocks out with No Vacancy hit “I’m Too Hot For You.” Glenn Slater’s characterful lyrics enhance the quality of the score.

Sharing credit for the success of School of Rock is the deft book of Julian Fellowes (of Downton Abbey fame). Exposition is swift, jokes are plentiful and Fellowes has an ear for the canny insight and refreshing honesty that flows from the mouths of babes. If some of the characters, particularly parents, have their roots in stereotypes, it simply helps to establish the storylines more expediently. The show is filled with heart whilst nimbly avoiding sentimentality. The final half of act two sees payoff after payoff provide as much delight as the big rock concert finale. 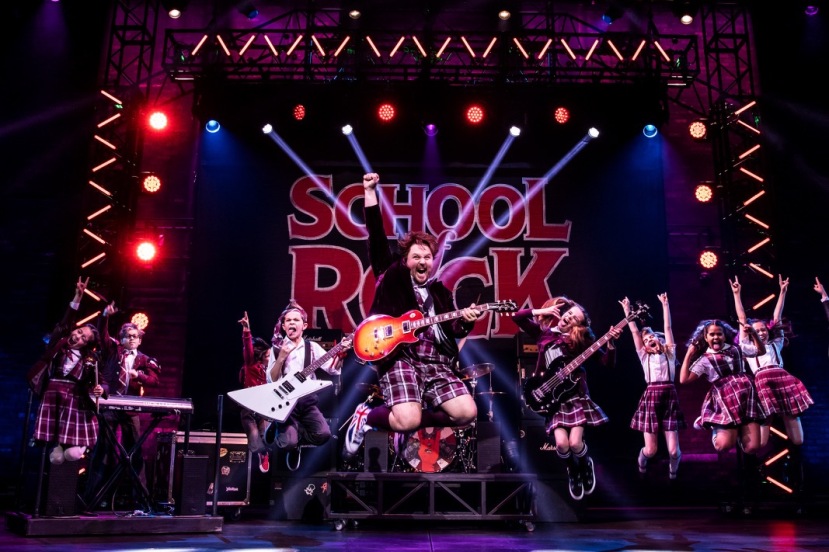 Director Laurence Connor keeps energy sky high and yet grounds the show in authentic humanity. Despite the clear sense that a happy ending will ensue, Connor keeps the stakes high, complementing Fellowes’ concise writing with characters that are sharply drawn.

Anna Louizos’ design is on a grand scale, and the chance to see a production that has not been scaled down for an Australian tour is much appreciated. Adaptions of movies are often beleaguered by the number of settings required; Louizos’ flexible set pieces move with choreographed precision to achieve cinematic flow. Lighting designer Natasha Katz helps to delineate the spaces, also having great fun with rock concert lighting in the final sequence.

Louizos’ distinctive costumes allow the adult ensemble to don unique guises to play a variety of roles. The Horace Green Academy uniforms are AC-DC chic, a look that pays off when big-kid-at-heart Dewey dons a deconstructed uniform in the finale.

Musical director Laura Tipoki draws blazing energy from a tight band in the pit, but the strength of her work is chiefly seen on stage, where three sets of child actors play their own rock band instruments to thrilling effect.

JoAnn M. Hunter cleverly choreographs the show in ways that do not look like formal choreography, providing organic, energetic movement that appears to be as much fun to perform as it is to watch.

In the role he was born to play, the infinitely likeable Brent Hill gives a star turn that is all the more engaging for his complete immersion in the character and his utter trust of the material. Dewey Finn may be a larger than life character, but Hill’s intelligent choices illuminate the humour without ever risking the performance going over the top. Almost always on stage, Hill’s unflagging energy is incredible, and he belts out the rock score with mighty style. A generous actor, Hill brings out terrific performances from his young co-stars and brings real heart to Dewey’s transformation from self-centered schlub to impassioned music teacher.

In a brilliant piece of casting, Amy Lehpamer plays somewhat against type as prim and proper headmistress Rosalie Mullins. Not possessing the ultra high notes of the role’s original portrayer, Lehpamer amusingly riffs on transposed variations of “Queen of the Night” when Rosalie gets carried away during music class. Rosalie could be just another stock musical theatre role, but Lehpamer is blessed by Fellowes with a surprising and satisfying character arc. When Rosalie ponders “Where Did the Rock Go?,” Lehpamer really lets fly and the result is electric.

Replacing John O’Hara, who sadly had to withdraw due to injury, Zachary Pidd is enjoyably comical as the real Ned Schneebly, ex-rocker turned straight-laced substitute teacher. In one of the most thankless roles in all of musical theatre, Nadia Komazec throws her full energy into her performance as Ned’s shrewish girlfriend Patty. A star to watch, Komazec will hopefully next be seen in a role that allows her full talent to shine.

The adult ensemble cast is filled with experienced, versatile performers who more than hold their own given that audience affection is unavoidably focused upon the child actors.

School of Rock features a dozen child performers, and it is credit to the writing, direction and performances that each of their characters is so clearly established by the end of the show. Highlights on opening night included Ava McInnes as forthright band manager Summer, Jayden Tatasciore as prodigious guitarist Zach and Chihana Perera as breakout vocalist Tomika. Lenny Thomas plays camp stylist Billy with unflinching abandon, and Orlando Schwerdt captures the geeky joy of keyboardist Lawrence.

Ideal family entertainment, School of Rock is not just blazing fun at the theatre, it is also sure to have children of all ages reaching for their musical instruments with renewed enthusiasm.

School of Rock plays at Her Majesty’s Theatre, Melbourne before touring to Brisbane and Sydney.

Man in Chair reviewed School of Rock on Broadway in April 2016.

Man in Chair reviewed School of Rock in London’s West End in January 2017.