Paris Opéra Ballet revived Rudolf Nureyev’s grand 1986 “Hollywood” Cinderella as part of the celebration to mark 80 years since the birth of Nureyev.

Said to be partly inspired by Nureyev’s own career trajectory, the staging is unique and yet highly respectful of composer Sergei Prokofiev’s original intentions. Heavy on storytelling, and featuring incredibly large set pieces, Cinderella is highly entertaining. If there is one downfall, it is in the repetitive nature of the clunky physical comedy, which is decidedly unfunny; romance and spectacle, however, are at a premium.

The ballet makes a traditional start to the story, showing the selfish stepsisters, in neon pink and blue, their doting stepmother and their hopelessly drunken father. Word comes of an opportunity for a movie audition, and the stepsisters are coached in preparation while Cinderella watches forlornly on.

The chance arrival of a movie producer, who crashed his plane nearby, gives Cinderella the chance to show her kindness. The producer, as Cinderella’s fairy godfather, takes a keen interest in her audition prospects and her subsequent career.

Halfway through act one, the family home flies out to reveal a mighty film studio. In front of the massive metropolis of the studio hang three giant cutouts of 1930s showgirls. IN the ballet’s most abstract sequence, each of the seasons perform a dance, with spring, summer, autumn, winter each represented by one lead girl supported by two male and two female dancers.

The metropolis set flies out to reveal vast mechanical workings, and the Hours (men bearing the numbers I – XII) bounce onto the stage.

A corps of girls in mauve and boys in grey enter, and Cinderella’s dark rags give way to a soft pale pink dress. A massed dance with the seasons ends the act in spectacular style, as Cinderella is swept off in a glamorous sports car. 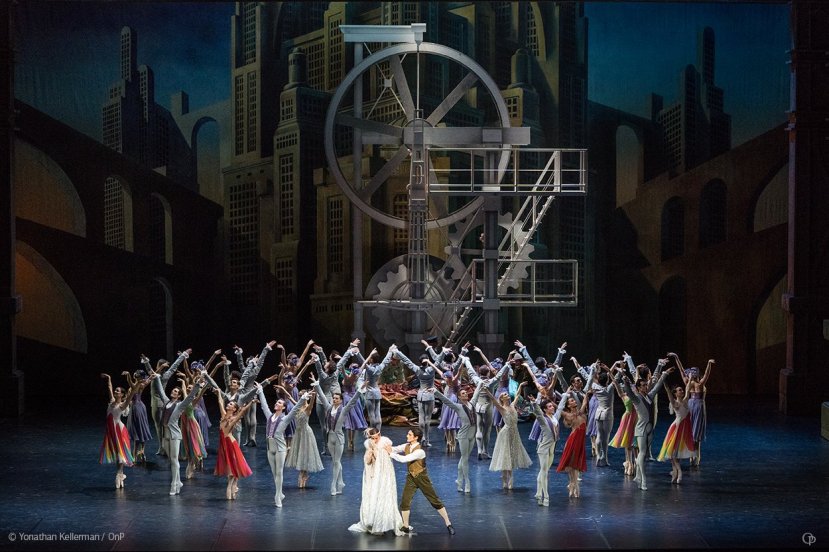 As act two opens, the movie studio is in full flight, churning out a police prison caper (Trivial Pursuit), a period comedy (Burlesque Parade) and even a remake of King Kong, gigantic puppet and all.

At a gala event that follows, it is time for the entrance of the “prince,” here a big time movie idol. Unimpressed with the step-sisters (who wouldn’t be), l’acteur-vedette is enchanted by the entrance of Cinderella. Now a great star, she is constant pursuit by a band of photographers. Dressed in gold, a very large corps engages in a number of large massed dances.

All too soon, the Hours re-enter and Cinderella takes flight. Back in her grey rags, she crosses the ballroom, accidentally dropping one of her glass slippers.

As the movie star, Germain Louvet impressed from the moment he first stepped on stage, giving a vibrant solo at the ball. An astounding athlete, Louvet dances with great physical control. Louvet and Pagliero displayed a charming level of stage chemistry. 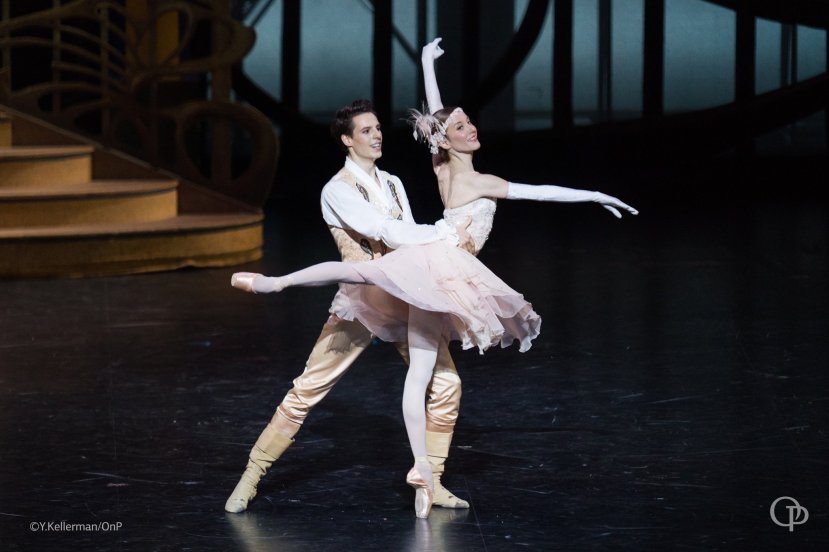 Marion Barbeau and Fanny Gorse underscored the Stepsisters comedy with a level of dance quality that was clearly first rate. Alexandre Gasse brought a highly amusing physicality to the graceless Stepmother.

Cinderella was reviewed at Opéra Bastille 7.30pm Wednesday 2 January 2019. The 2018/19 season of Cinderella has now closed.