Arriving in Melbourne in killer form, the new concert staging of Sweeney Todd lives up to the tantalising promise of starry leads Anthony Warlow and Gina Riley. 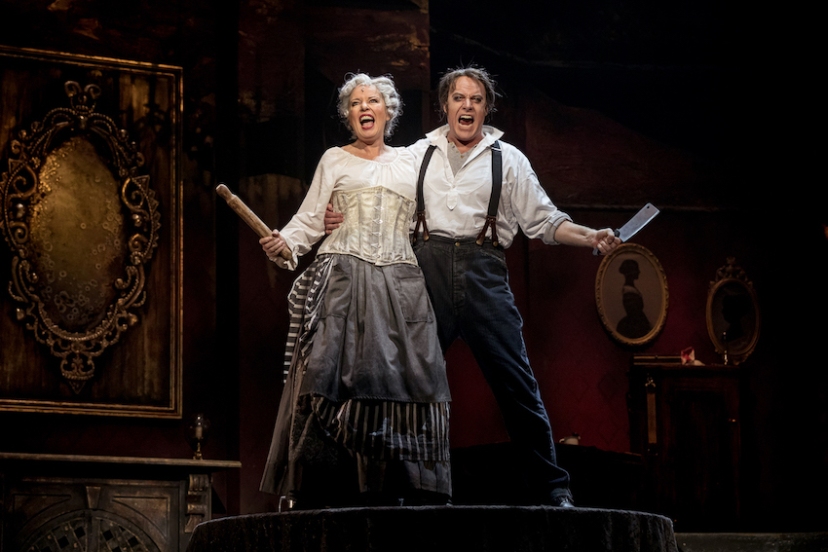 With a solid set, full costumes and not a score or script in sight, the impressive short-term production is really only a “concert” in the same sense as The Production Company shows, in that the orchestra is positioned on stage. The orchestra is a key feature of the quality of the work, with 22 musicians giving a rich, polished performance. Musical director Vanessa Scammell is also blessed with a cast that is dotted with opera singers, allowing a precise, full bodied rendition of composer Stephen Sondheim’s devilishly intricate score.

In a unique concept, director Theresa Borg has the spirit of Sweeney Todd summoned forth at a séance, with the grisly story of the diabolical demon barber playing out in the rooms of a crumbling Victorian mansion. Borg makes clever use of the space, keeps storytelling brisk and clear, and successfully warms the edges of the grand guignol thriller with delectable humour. 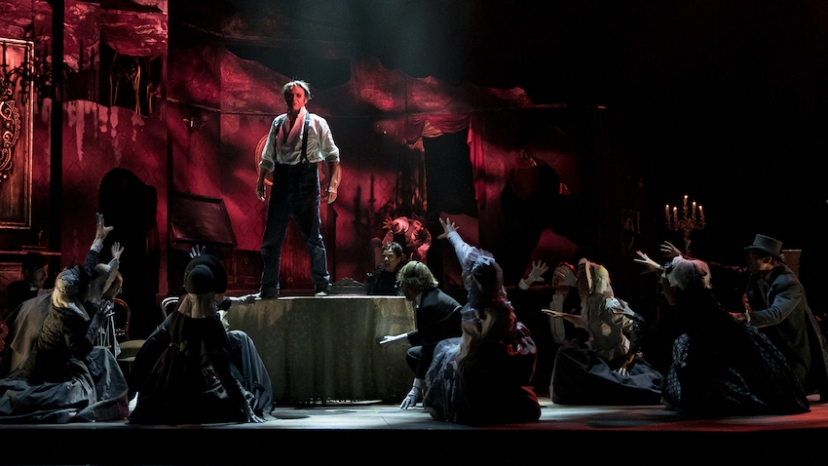 Charlotte Lane’s dark red setting contains myriad tricks and trapdoors, which add considerable atmosphere to the spooky tale. Tom Willis adds to the sense of mystery and unease with a lighting plot that is remarkably detailed for such a short season.

The red of the set (and of the gushing blood!) is all the more striking for the greyscale costumes of Kim Bishop. Eschewing all colour is a brave move in musical theatre, but Bishop pulls it off with glossy flair, delivering abundant visual appeal. Bishop’s vision is well supported by the attractive wig stylings of Corrine Day. 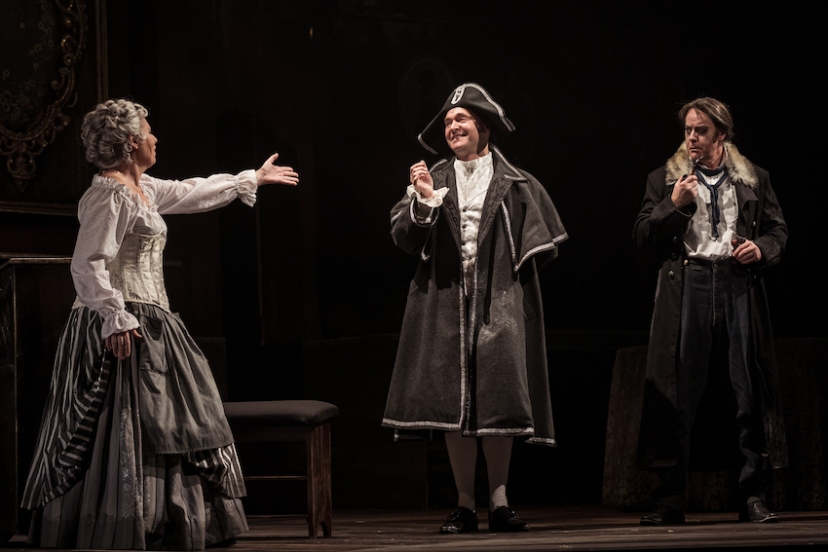 Borg’s séance concept is essentially a framing device and it disappears for much of the show. Liveried footmen move props as though servants of the mansion, and the lady of the house, played by the wonderful Caroline Vercoe, hovers tremulously in the background. The cleverest link comes when the Spiritualists receive the text of “The Letter” as a message from beyond, making purposeful use of a dissonant piece of music that is usually very difficult to stage.

In the absence of a fully realised trap door for the victims to slide through from the barber’s chair, the concept of having them stand in silhouette and then lurch off almost like zombies is a good compromise from Borg.

Choreographer Jo-Anne Robinson provides neatly conceived musical staging that makes smooth use of the various heights and entry points of the stage. As with Borg’s direction, Robinson’s choreography keeps the action well down stage, facilitating strong bonds with the audience.

In a role he was seemingly born to play, Warlow is in excellent voice as Sweeney Todd, with act one thriller “Epiphany” one of the clear vocal highlights of the evening. Giving everything to the emotional arc of the character and yet never overplaying the drama, Warlow keeps the heightened character surprisingly human. He brings fresh expression to the well-known role, especially in dialogue or song that benefits from an added drip of menace. This is a thrilling star turn that has been worth the wait to see.

As the decadently wicked Mrs Lovett, Riley is a delightful foil for Warlow, all soft curves to his hard lines. Riley’s Sondheim experience pays off in a crisp musical performance that successfully clouds the sheer difficulty of the piece. Riley’s physical and facial humour are well judged, and her chemistry with Warlow is a joy to watch. 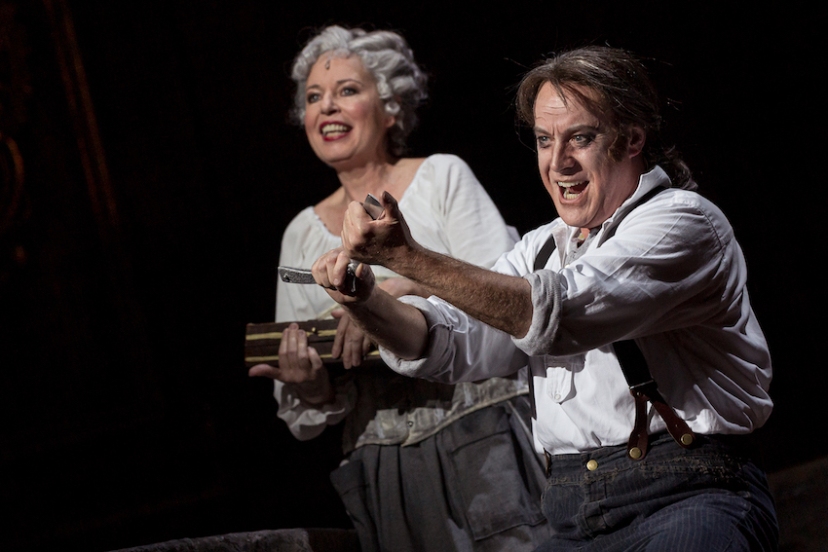 With two huge names above the title, producers of Sweeney Todd have been able to focus simply on talent, particularly vocal talent, for further casting. 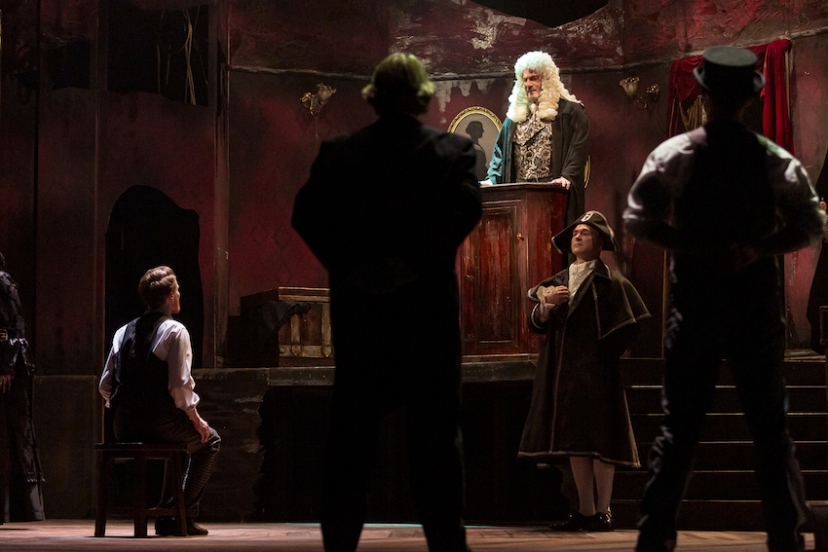 Recent graduate Owen McCredie gives a highly auspicious professional Australian debut as good hearted young sailor Anthony, imbuing the role with his leading man looks and sumptuously sweet tenor voice. Genevieve Kingsford brings her crystalline soprano to dear Johanna, proving once again what an excellent and intelligent actress she is in addition to being a sterling singer. 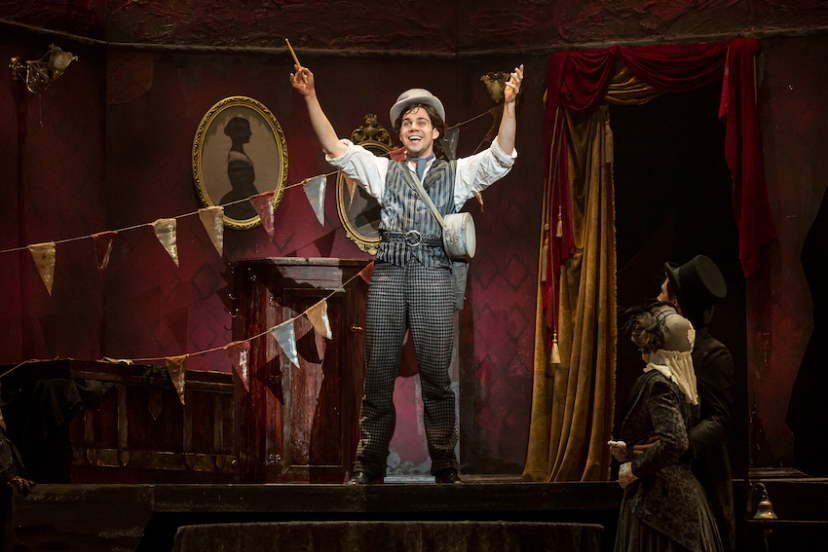 Anton Berezin gives strong support as the self-serving Beadle Bamford, colouring the role with just the right degree of fey dispassion. Tod Strike captures the artificial flamboyance of street barber Pirelli, contrasting this nicely with the man’s true self.

Initial performances in Sydney clearly helped to prepare Sweeney Todd for its principal season in musical-loving Melbourne at the treasued and highly suitable venue of Her Majesty’s Theatre. Musical theatre fans, especially those old enough to remember the mania for Anthony Warlow in Les Misérables and The Phantom of the Opera, should not miss the chance to see the great man as Sweeney Todd.

Sweeney Todd plays at Her Majesty’s Theatre, Melbourne until 23 June 2019.