The Australian Ballet heads straight back down the rabbit hole, returning award-winning 2017 hit Alice’s Adventures in Wonderland to the Melbourne stage for a very welcome encore season.

At a time when it feels like all the world’s ballets and operas have already been written, the success of Alice’s Adventures in Wonderland shows what can be achieved by investing and believing in new talent. One of the very rare full-length classical works to be written in this decade, the ballet is all the more remarkable for the sheer level of enjoyment it brings.

A co-commission of The Royal Ballet and National Ballet of Canada, the 2011 work crystallises the creative choreography of Christopher Wheeldon with stunning designs by Bob Crowley, neatly integrated projections by Jon Driscoll and Gemma Carrington, and inventive puppetry by Toby Olié. Over and above the achievements of these artists, the true hero of the piece is arguably Joby Talbot, whose full-length original score is an absolute delight, intrinsic to every element of the ballet’s wondrous appeal.

In addition to sweeping melodies, Talbot has infused the score with a sense of time-ticking tension that connects the scenes into a cohesive whole. Percussion is extensively featured throughout the music, often with unusual sounds and challenging rhythms. Conductor Simon Thew leads Orchestra Victoria in a virtuosic performance, which was deservedly met with great acclaim on opening night. 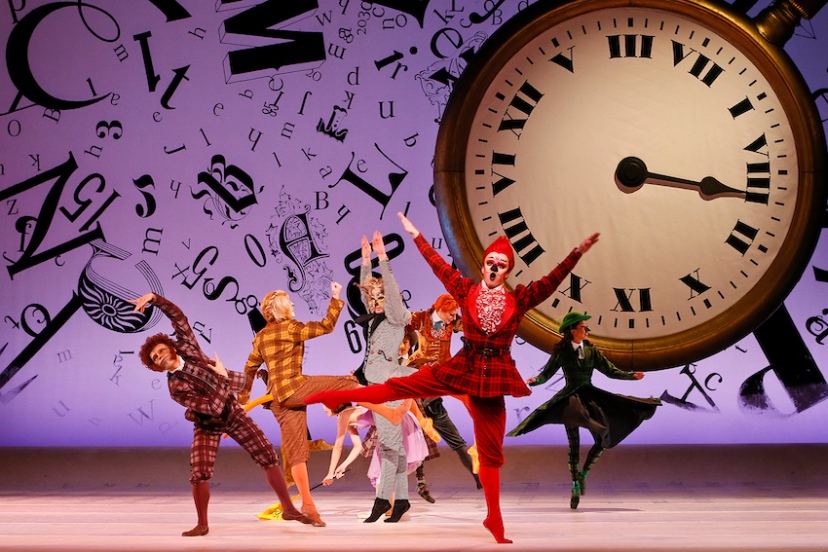 The chance to watch Alice’s Adventures in Wonderland again not long after its Melbourne premiere season brings the added satisfaction of observing myriad details. A double page spread in the program illustrates how each guest in the garden party prologue becomes a vivid character in Wonderland, and Talbot’s motif for each character can be heard as they arrive. Visual clues are sprinkled through the whirling projections that accompany Alice’s rabbit hole descent. When one of the Queen of Hearts tart adagesuitors is to be beheaded, his corpscard deck partner runs offstage after him in tears.  And the instant attraction between bloodthirsty blade wielders The Cook and The Executioner is wickedly funny. 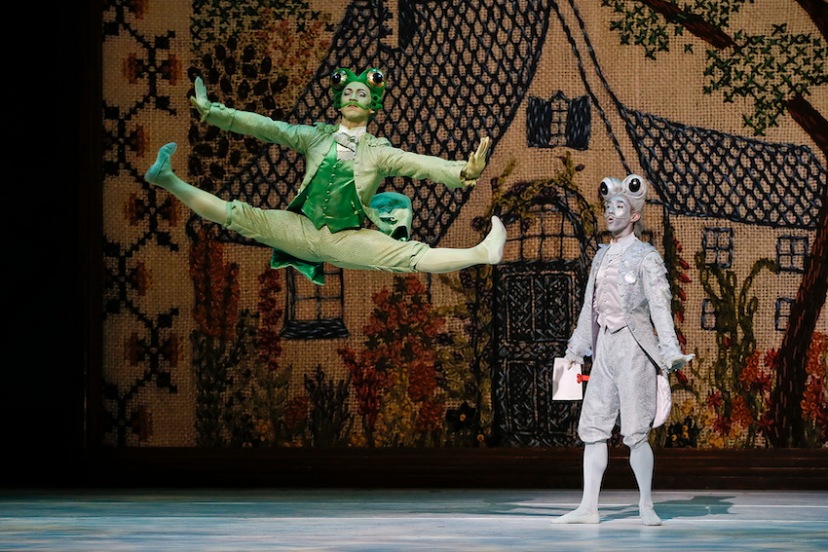 As well as taking home the Helpmann Award for Best Ballet at the 2018 ceremony, the production also earned a Best Female Dancer Award for principal artist Ako Kondo, who reprised her delightful performance on opening night of this return season. On stage for basically the entire show, Alice is required to dance and interact with every character, navigating a cornucopia of styles and vibes. Kondo has the gracious stage presence to yield to each stage partner whilst gently maintaining her own spotlight. The role does not offer any full-blown fireworks, the inspiring effect is simply the impressive sum total of the evening’s parts, the accolades coming for the delicate magic of the overall effect.

As a sign of the current depth of talent at the company, the demanding role of Alice is being danced by no less than seven artists across this extended Melbourne season.

Opening night also brought the chance to see three of The Australian Ballet’s five male principal artists in action. Ty King-Wall is an endearingly boyish Knave of Hearts, convincingly holding Alice’s heart with his heroic charm. King-Wall and Kondo enjoy easy chemistry, and their expressive pas de deux are a pleasure to watch. Adam Bull immerses himself completely in the ticks and tension of The White Rabbit, performing a characterful solo at the top of act three. Andrew Killian shimmers with slinky sensuality as the chemically enhanced Caterpillar. 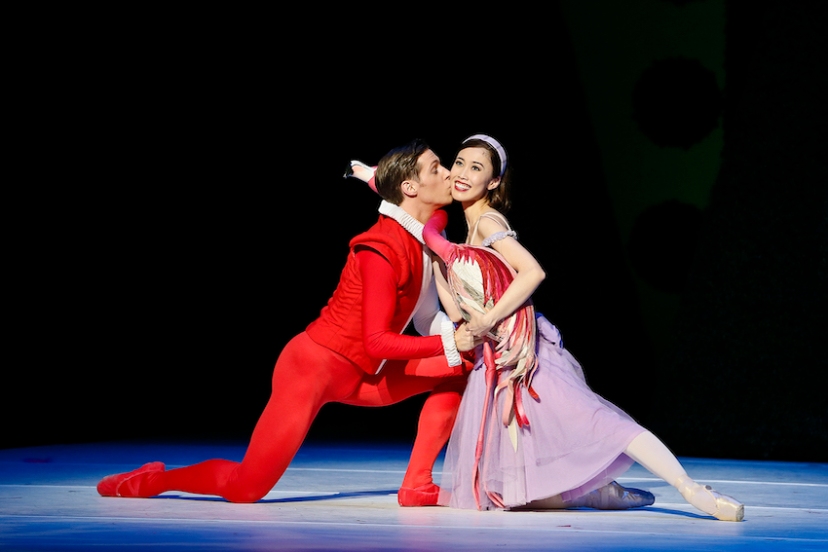 In the crowd-pleasing role of the vaingloriously villainous Queen of Hearts, Valerie Tereschenko expertly conveys the full humour of the character, scoring abundant laughs as the Queen’s own vitriol upends her attempts at elegant dance.

Jarryd Madden delivers the crisp tap beats of The Mad Hatter, his precise percussion becoming almost another instrument in the orchestra. 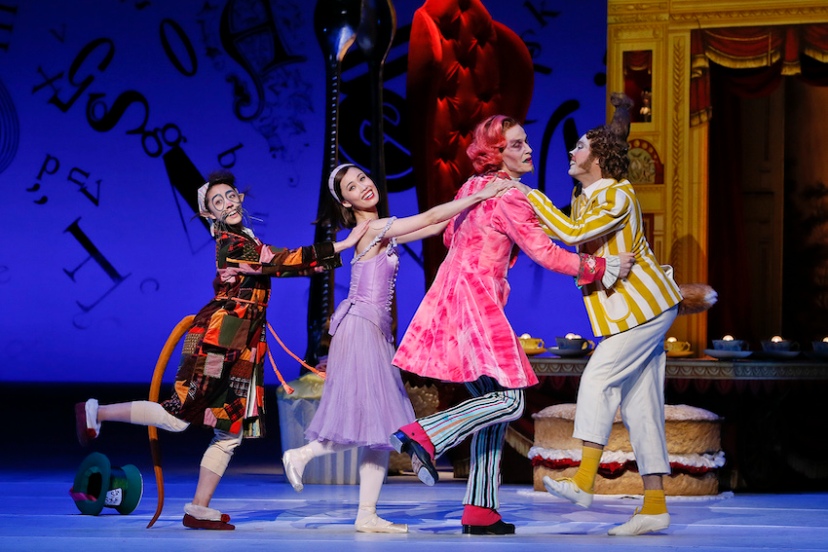 David McAllister plays the Widow TwankeyThe Duchess with highly amusing aplomb. Perhaps the disappointment of McAllister’s 2020 resignation as artistic director will be eased with news of him gracing the stage as the Widow Simone in a long overdue revival of La Fille mal gardée.

Man in Chair was accompanied by Miss Eight, aka Niece in Chair, who decreed the dance of the flowers her favourite moment for the light and colour it brought to the stage. She was also totally taken by the adorable little hedgehogs who serve as the balls in the Queen’s croquet match.

With a running time of almost three hours (including two intervals), the 7.30pm sessions are a late night for young theatregoers, but matinees and 6.30pm performances should be much more manageable. Far from being just for children, Alice’s Adventures in Wonderland is first rate entertainment for all ages. Fans of musical theatre are an obvious crossover audience for the piece, with the scale of production even surpassing the usual Broadway standard.

Read the casting for Alice’s Adventures in Wonderland.