An off-Broadway show with the nerve to charge Broadway prices, the “Bard Summerscape Production of” Oklahoma! plays out like a cynical practical joke on theatregoers. The egregious experiment is a blight on 75+ years of American musical theatre.

A classic example of The Emperor’s New Clothes, the production may have had its place at St. Ann’s Warehouse in Brooklyn, but the bright lights of Broadway show it up for the hollow fraud that it is. Supposedly seeking new meaning in the classic text, director Daniel Fish has excised the show’s charm with the precision of a surgeon. The few laughs that remain just serve to demonstrate the resilient hardiness of the original material.

The audience enters to a festively decorated barn-like space with glittering tinsel draped overhead and hotpots simmering on trestle tables. For no discernible reason, the walls are decorated with dozens of rifles. Previous productions at this venue have had the audience on three sides, but the effort to play to all three sides has not usually been so visibly obvious as in Oklahoma!. 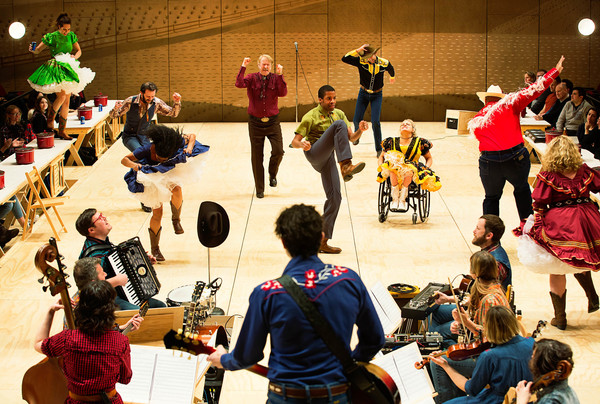 The ensemble cast of eleven is on stage for much of the show, creating confusion over locations and who is listening to which conversations. Similar confusion arises over time and place, with Oscar Hammerstein II’s original libretto in use but with a mix of present day costumes and props. Almost all of the energy is sapped out of the scenes by having the cast remain seated for most of their songs and dialogue.

Credited for orchestrations, arrangements and music supervision, Daniel Kluger should perhaps write his own ever-beloved score before tampering with someone else’s. Six on-stage musicians play various stringed instruments, with the conductor adding accordion and percussion. Richard Rodgers wanted his music performed as written, and the arrogance of interfering with this level of genius is astonishing. The small ensemble manages harmonies very well, but the vocal effect of the chorus numbers is lost. 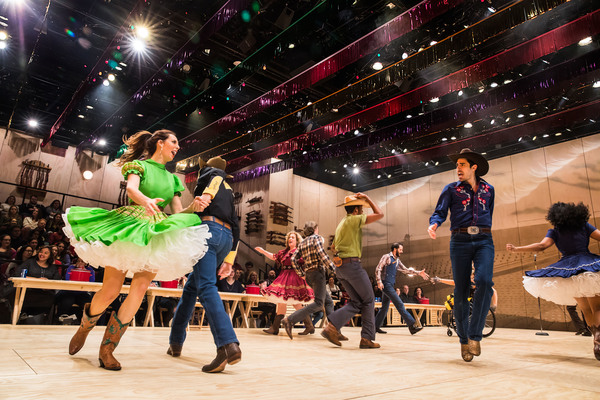 Lighting designer Scott Zielinski rather annoyingly keeps house lights on for much of the show. The scene in Jud Fry’s smokehouse finds the space plunged into inky blackness, which successfully has an unsettling effect. This is subsequently eroded with the gimmick of projecting live footage onto the backdrop.

At interval, the audience queues for a serve of the chilli that has been cooking in hotpots and a piece of the cornbread that was mixed on stage by Aunt Eller and Laurie in the opening scene. 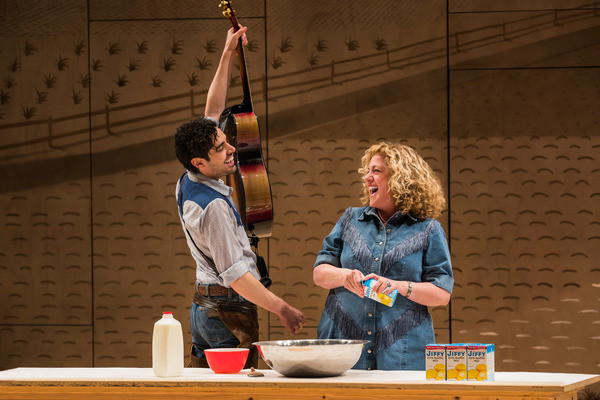 The most bizarre aspect of the production comes directly after interval, when the “Dream Ballet” sees a lone African-American woman with a shaved head wearing just a sparkly white t-shirt and white briefs do a wild interpretative dance for fifteen minutes. At one point, cowboy boots drop from the ceiling, before the woman eventually scoots herself along the floor and out the door. I could not make this up if I tried.

After a long buildup, with special ominous music each time the “Little Wonder” is mentioned, the scene where Jud Fry may have stabbed Curly is over so fast that it barely has time to register.

The musical’s climax is changed to involve gun violence instead of a knife fight. The blood has a startling impact, but the direction of the encounter seems to totally undermine the “self defence” angle.

Mary Testa plays Aunt Eller as something of a control freak, a key aspect in the absence of charm on stage. Mallory Portnoy scores laughs in return for the infectious cackle of giggling Gertie (although it is not clear why Gertie is an alcoholic).

James Davis makes a mild impact as Will Parker. Tony-winner Ali Stroker was in absentia at this performance, wit Sasha Hutchings making a very good Ado Annie in Stroker’s place.

I am choosing to remember the Trevor Nunn Oklahoma!, seen right next door at the Gershwin Theatre in January 2003, as my experience of Oklahoma! on Broadway.