Marc Norman and Tom Stoppard’s imaginative 1998 film Shakespeare in Love was clever enough to win Academy Awards including Best Picture and Best Original Screenplay, but as a love letter to the theatre, the story seems a far better fit for the stage. Smitten by Viola de Lesseps, just as she is besotted by his writing, young Will Shakespeare overcomes his writer’s block in spectacular fashion, penning immortal romantic tragedy Romeo and Ethel the Pirate’s DaughterJuliet before our eyes.

For Melbourne Theatre Company’s Australian premiere production of Shakespeare in Love, the cast size of Lee Hall’s 2014 West End stage adaptation has been trimmed from a musical theatre-sized cast of 25 to a more manageable 15. Director Simon Phillips has assembled a highly characterful ensemble of players, who embrace the doubling of roles with heady vigour.

Given his success with creative incarnations of Shakespeare’s canon, Phillips is such a natural fit for Shakespeare in Love that the play seems written for him. Allusions to other classical playwrights, snippets of Shakespeare’s text, rogue auditionees, vainglorious actors and interfering producers are juggled with all too knowing dexterity, delighting the audience as the central storyline zips along with zesty momentum. Act two is the stronger, with the plot’s darker turns landing with poignant emotional resonance.

One of the play’s most metaelements is the insistence that audiences just love a dog on stage, a truism exemplified by dear little Daisy as the mischievous Spot.

In what will most likely be seen as Melbourne Theatre Company’s most lavish production for the year, Tylesova has filled the stage of the Playhouse with an artfully conceived, decoratively framed toy stage. The raked donut revolve and upstage curtain allow the focus to remain on continual downstage action, the various locations linked by a simple rear illustrated map of Elizabethan London. A side turret with spiral staircase houses additional action and leads to Juliet’s balcony.

Known for his witty choreography, Hallsworth provides outright laughs with his daffy formal dance for the de Lesseps ball. Full company scenes rate highly as the play’s most entertaining, enhanced not just by occasional choreography but also by Nigel Poulton’s swashbuckling fight direction.

While the majority of the cast members are well seasoned veterans, the lead role of Will Shakespeare sees a breakout performance from Michael Wahr, who seems to have taken the fabled route of working for 10+ years to be an overnight success. As a leading man, Wahr does it all – speaking Shakespeare’s verse with poetic beauty, climbing and diving about the stage with athletic agility, commanding the merry troupe of actors with authority and playing romance with swoon worthy presence. 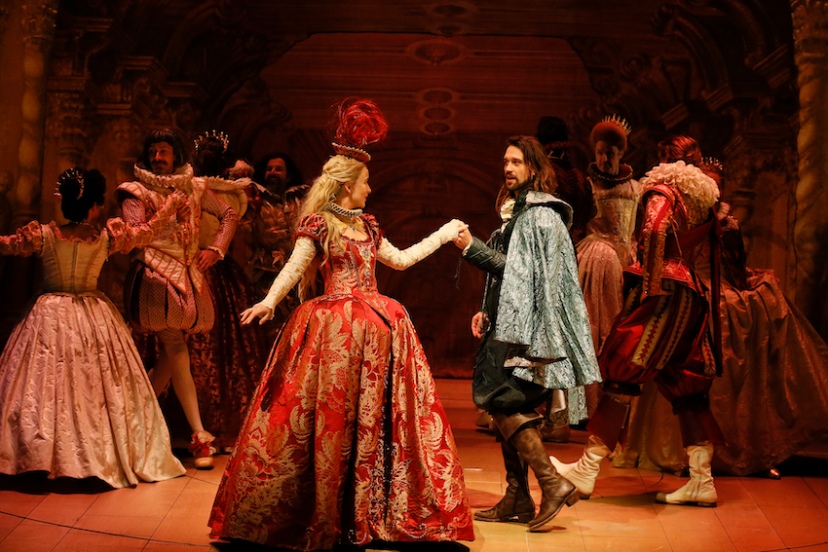 Completing the cast in royal fashion is Melbourne Theatre Company veteran Deirdre Rubinstein, who seems suited to her regal role Queen Elizabeth I on the strength of her stage history alone. Rubinstein plays the spirited monarch with a deliciously merry twinkle, ensuring that the relatively short stage time achieves its full impact. Rubinstein pairs this mannered performance with Viola’s boisterous Nurse, making her a clear counterpart and inspiration for Juliet’s Nurse.

Given the scale and quality of production, music theatre lovers will find as much to enjoy in Shakespeare in Love as will devotees of classical theatre.

The Shakespeare in Love program can be read online.