Readily meeting sky high anticipation, the new Melbourne Opera production of Norma brings a mighty shine to this revered, and often unattainable, jewel in the crown of the bel canto repertoire.

Splendidly cast, the season is deservedly built around internationally successful Australian soprano Helena Dix, meeting Melbourne audience demand for the singer after her local 2017 triumphs in Lohengrin and Roberto Devereux. An exceptional set of castmates join Dix to deliver a thrillingly sung, strongly acted performance of the all too rarely staged opera.

The archaic setting of Bellini’s opera is updated by director Suzanne Chaundy to a mid-twentieth century European setting. The conflict between traditions of the church and intrusions of the military plays out in broad strokes, allowing full attention to fall upon the revelation of the central tempestuous love triangle between high priestess Norma, fellow priestess Adalgisa and Roman proconsul Pollione.

Chaundy creates an interesting dynamic by having Adalgisa adopt a subservient role to Norma. Another interesting angle is the casting of Norma’s illicit children with Pollione as twins, suggesting that Norma broke her chastity vows for an indiscretion with Pollione just the once. Still, the high priestess’ great love for the caddish military man spurs immense jealousy, anger and self-destruction.

While the action of Romani’s libretto is inherently static, Chaundy is aided by movement director Verity Hunt-Ballard in creating visual interest with the pageantry of the druids. Dale Ferguson’s amphitheatre-like setting creates a reference to the strong sense of Greek tragedy in the story. A key feature of Ferguson’s design is the glossy dark blue tarkett that has been laid on the stage, which creates a luscious, decadent tone. Rear panels of sparkly or gleaming materials make for an attractive backdrop that is deliberately indeterminate in nature.

Costume designer Harriet Oxley contrasts the traditional flowing robes of the druids with the brute force of the military presence. All soldiers bear arms, despite the apparently peaceful nature of the church and local people. Costumes are grandly reflected in the glossy tarkett floor, enhancing the sumptuousness of the stage picture. Excellent wigs, by Taylor Elliott, are another aspect of the high standard of the production.

Raymond Lawrence performs double duty with Norma, having expertly prepared the Melbourne Opera Chorus and also taking up the baton to conduct the Melbourne Opera Orchestra. Choral singing is excellent, complementing the strength of the principal singers to wonderful overall effect. Lawrence adopts brisk tempi, particularly in the early stages of the opera, a risk that pays off with rather thrilling results.

The relatively dry acoustic of the Athenæum Theatre has a tendency to expose flaws in an unforgiving manner; the quality of the music in Norma capably survives this test, a testament to the work of Lawrence and all musical staff involved in the preparation of Norma.

In another highly accomplished performance, Dix does more than sing the role of Norma superbly, crafting an intriguing character who is, by turns, sympathetic, monstrous, tender and vengeful. Once again demonstrating her excellent preparation and carefully considered phrasing, Dix has particular opportunity to demonstrate her key vocal strength, which is the unwavering purity of her pianissimo singing. Possessing an impressive range, Dix brings the fiery trio of act one to a thrilling end with an interpolated high D.

Making both her Melbourne Opera debut and her role debut as Adalgisa, renowned mezzo-soprano Jacqueline Dark is a star attraction in her own right. Dark capably displays the higher part of her register in the role, which is often played by a soprano. A highly accomplished actress, Dark has Adalgisa glowing with love and then ashen with shame, adding heft to the emotional weight of the story. In one of the most beautiful sequences of the evening operatic sisters Dark and Dix breath as one as they perform the extended duet sequence of act two.

Successfully forging a career overseas, tenor Samuel Sakker makes a welcome return to the company that played a significant role in fostering his early work. Tall and handsome in military uniform, Sakker gives Pollione the appearance that has (at least) two women under his spell, successfully countering this aspect with an undercurrent of vulnerability. Sakker’s voice rings out resoundingly from the Athenæum stage, and his work with colleagues Dix and Dark completes the compelling trio to memorable effect. 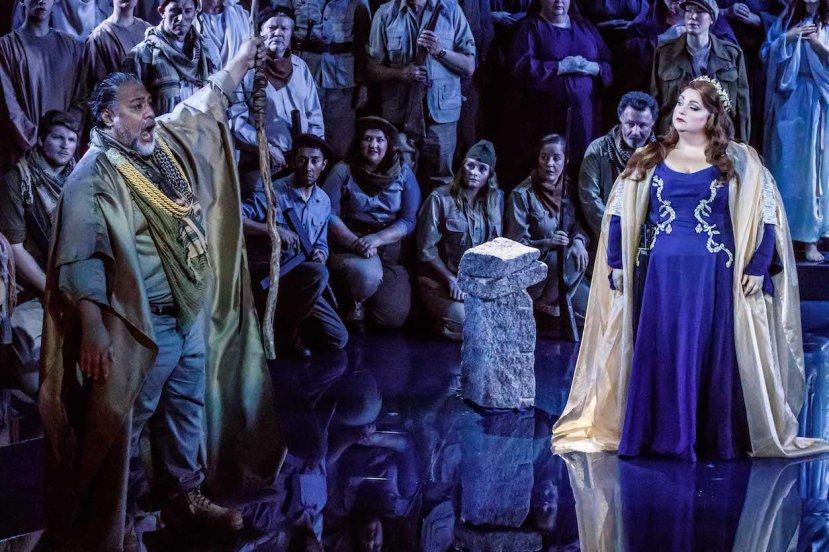 Given that we may have to wait another generation to hear Norma, connoisseurs of opera in Melbourne are urged not to miss this highly accomplished production.