Brightly polished to a gleaming sparkle, jukebox gem Mamma Mia! benefits from fresh, creative design, brought to life by a well-balanced blend of new and experienced cast members who capture the beating heart beneath the glossy surface. 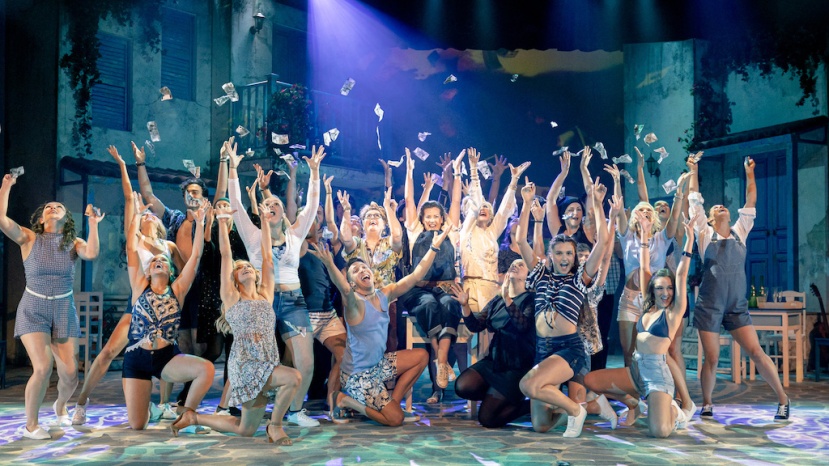 CLOC Musical Theatre continues their tradition of staging spectacular non-professional productions, succeeding all the more impressively this time with an extra dose of creativity. Fans of Mamma Mia! would still be there for a black box staging, so the cornucopia of dazzling sets, lights, projections, dance and costumes are a luxury indeed. All this, plus a superb set of performers and those glorious ABBA songs heard at their best.

Director Craig Wiltshire makes supremely confident use of the vast National Theatre stage, filling the space with the requisite colour and movement with great flair. The spectacle is balanced with the intimacy of key book scenes, in which the characters connect with authentic emotion. Wiltshire dials back the heightened energy seen in professional productions, trusting the work to stand on its own merits, which it does.

Also serving as choreographer, Wiltshire delivers lively, tightly rehearsed numbers that are a pleasure to watch. As act one moves to its climax, the flow of scenes through Sophie’s hen’s night, Sky’s buck’s night and the combination of the two parties juggles storytelling, song and dance so well that gasps of disappointment were heard when interval came along and interrupted the enjoyment.

Act two opens with a new staging of Sophie’s nightmare “Under Attack,” benefitting particularly from the projections that are a key aspect of the production’s overall creative design. 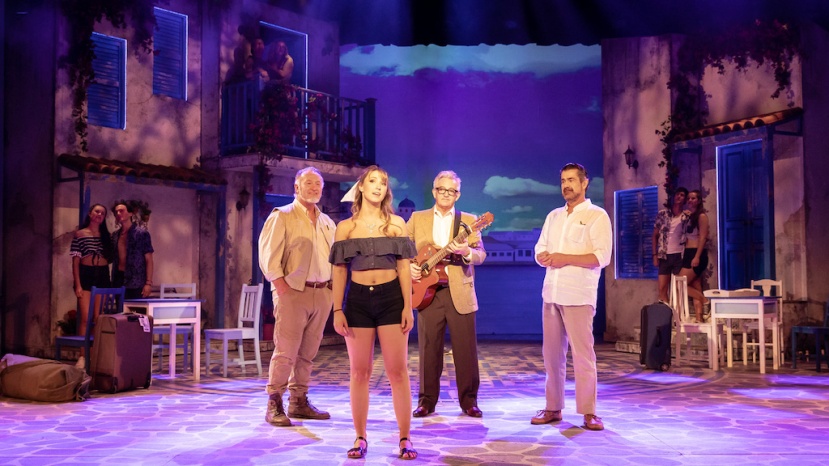 The music of Mamma Mia! is deceptively complex. Just because we can all hum the tunes does not mean that performing the songs is a breeze. Music director Tony Toppi leads a slick band of nine musicians, successfully creating the much-loved ABBA sound. Sung live, vocals are at a premium, with particular quality from the heavenly sopranos. Sound design by Marcello Lo Ricco deftly blends the music for an immersive experience.

Whereas the original set design of Mamma Mia! had an air of simplicity, Sally Martin takes this up several notches with a grand design that is very well judged in regard to supporting the story without spectacle for its own sake. A key feature is Martin’s expert painting of the floor as a stunning circular tiled mosaic. Having characters arrive and depart by free moving motorboat is a classic example of CLOC Musical Theatre’s technical wizardry at work.

Costume designer Brian Misson makes terrific use of colour, collaborating with Martin and lighting designer Brad Alcock to create integrated scenes drawing from a palette of Mediterranean blue, white and fuchsia, with later splashes of sea green, orange and coral. The Dynamos’ teal costumes are stunning, with another highlight being Sophie’s off the shoulder wedding dress. Special mention to hair designer Natalie Della Grazia for Tanya’s beautifully coiffured blonde wig. 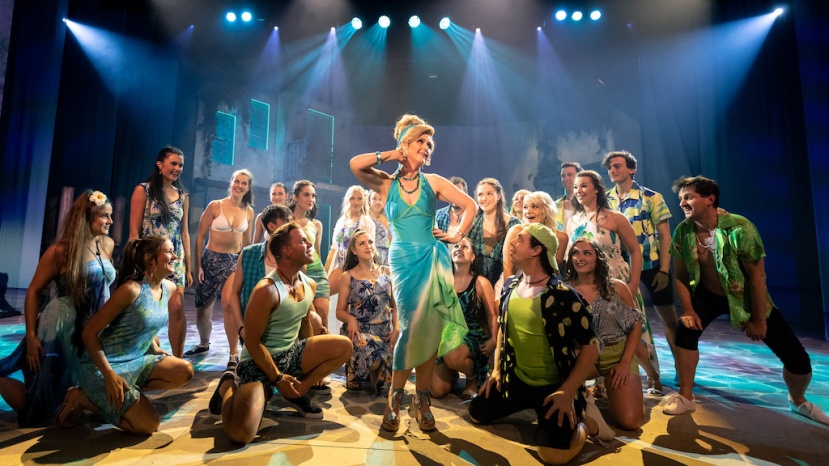 Versatile leading lady Rosa McCarty may be the first actress to play the unique combination of Donna Sheridan, Mary Poppins and Elphaba at the one company. In another dynamic, heartfelt performance, McCarty grounds the rather frivolous story with a character of great integrity and heart. McCarty brings fresh expression to the well-known songs, and enjoys strong chemistry with each of her co-stars. McCarty lets fly in Donna’s 11 o’clock number “The Winner Takes It All,” providing a thrilling climax.

McCarty is expertly supported by stalwart talents Pam Christie Birkett as serial divorcée Tanya and Carolyn Waddell as cuddly cook Rosie. Each of these three women have great comic timing and excellent singing voices, and when the Dynamos reunite with “Chiquitita,” “Dancing Queen” and “Super Trouper” the show really takes flight.

India Morris is an exciting young performer who neatly sidesteps the potential mawkishness of Sophie’s quest to find her father, creating an engaging character who is sweet but not saccharine. Morris delivers powerhouse vocals, completing the package with terrific dance skills (not to mention some impressive gymnastic moves).

Ric Birkett brings out the romantic tenderness beneath the hearty confidence of Sam. Barry Tudor balances the sophisticated and fun-loving sides of banker, and former headbanger, Harry. Rick Howden puts a loving twinkle in the eye of seasoned adventurer Bill.

There is really no such thing as too much Mamma Mia!. Even those have seen all three professional Australian tours and the movie and its sequel will find fresh enjoyment in CLOC Musical Theatre’s new production. The quality of the production and cast could readily support a run of several months.