Wildly inventive, joyfully humorous and unfailingly energetic, music theatre goldmine Menier Chocolate Factory provides boundless entertainment in this best of all possible productions of Candide. Director Matthew White has not only presided as ringmaster over the talented cast’s terrific abilities, but has also crafted a version of the dangerously convoluted plot that actually makes daft, delicious sense.

Candide was famously concocted by too many cooks, and it continues to be adapted at each new staging. White’s New Version, based on the 1988 Scottish Opera Version, maintains a brisk, snappy feel, although it still stretches some 160 minutes (including interval). All common sense and disbelief must be cheerfully surrendered for optimal enjoyment of this incarnation, in which resurrections, recoveries and massive coincidences are frequently glossed over as being “a long story.”

Bernstein’s richly melodious music is usually played with a classical orchestra, and includes one of the best-known overtures in music theatre. Reduced to nine musicians, the sound is completely altered here, having a rich, festive oom-pah sound that is a perfect match for the wild and wacky on-stage shenanigans.

The triple threat cast plays multiple roles, manipulates props and puppets, and performs Adam Cooper’s choreography with flair. The crowning glory, however, is the glorious quality of the singing, especially the choral harmonies.

The playing space is almost impossible to describe, a circus ring surrounded on all sides by audience as well as countless steps, levels, balconies, walkways, windows, ladders, shutters, balustrades and doors. It’s mind-boggling to think that the lighting design had to cope with so many varied and frequently changing positions. Drilled to perfection, and blessed with natural skill, the cast makes easy work of playing to all audience members, even including some viewers directly in very non-threatening and good-natured audience involvement.

Fra Fee, all thick black curls and shiny eyes, is an earnest, endearing Candide. James Dreyfus delivers three comic characters with a mischievous twinkle. Jackie Clune has a marvellously dry delivery as The Old Lady, and has a ball with rhythmic showstopper “I Am So Easily Assimilated.” 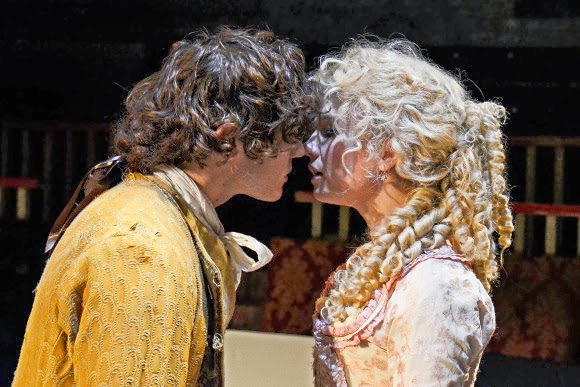 Australia’s Ben Lewis may not have had to bring chairs on when he was Phantom in Love Never Dies, but this is an insignificant price to pay to take part in such a dynamic, enjoyable production. Lewis plays a range of roles with distinction, including a lusty archbishop, a governor in a wicked Captain Hook-like wig and a pot bellied, ill-fated Dutchman. 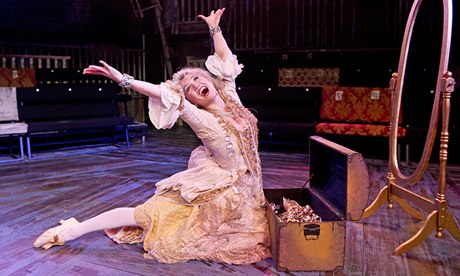 To take nothing away from all of the accomplishments of the cast, the shining light in the production is Scarlett Strallen, the West End’s answer to Sutton Foster*. As the vain and avaricious Cunegonde, Strallen performs the iconic “Glitter and be Gay” in a way that lets you hear it as if for the very first time, or at least the first time that it makes sense. It is a sensational sequence that is practically worth the price of admission alone, with beautifully underplayed humour that would make Kristin Chenoweth blush with shame at her overindulgence. 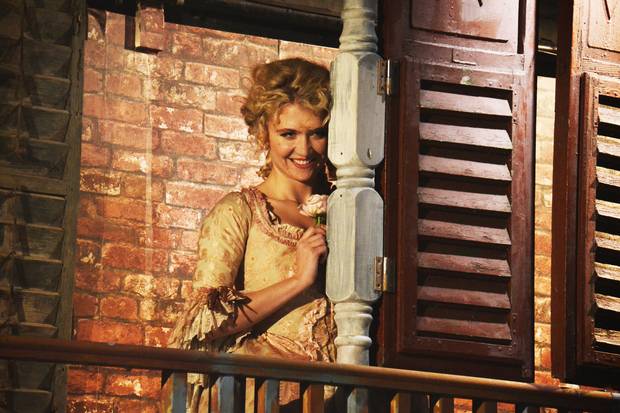 Candide was reviewed on 8 January 2014 at Menier Chocolate Factory, where it plays until 22 February 2014.

*not that Scarlett and Sutton have played any of the same roles, but there is a similarity in that both are impossibly gorgeous, great actresses, incredible dancers and fantastic singers. They both have siblings in the biz, and are both never out of work.