There is an inherent risk in messing with perfection. As a theatrical experiment, Fawlty Towers Live could have ended up an indulgent parody, a pale shadow of the original or an outdated bore. Instead, the world premiere staging of one of the greatest ever sitcoms is fabulously fresh and funny.

The cherished series has been adapted for the stage by original star John Cleese, who penned every episode with then wife Connie Booth, who played Polly. Cleese has been wise to enlist the services of experienced director Caroline Jay Ranger, whose input successfully shaped the play from the combined script of three of the original episodes.

In adapting a work for a different medium, the overriding question is always whether it adds anything to the original. On Liz Ashcroft’s capacious set, up to four scenes can occur simultaneously, often adding subtext to the main focus.  The intertwined story threads are timed precisely to maximise the escalation of tension and provide a number of climactic comic moments before the grand finale. Best of all, the combination of excellent casting and organic direction bring the revered characters back to life with a vibrancy that is far superior to any sort of impersonation.

To ground the hilarity, Cleese takes a few moments in act one to allow ever-sparring spouses Basil and Sybil Fawlty to share a civil, human exchange. The connection they once shared, but struggle to cling to now, is actually evident in this stage version.

The story remains set in the 1970s, a time of rotary dial phones, garish fashions and smoking in the workplace. Ashcroft pays homage to the original wardrobe, providing costumes that are distinctly unappealing without drawing unnecessary attention away from the verbal and physical comedy. Sibyl’s figure-hugging purple suit is offset perfectly with one of her trademark large white ruffles down the front of her blouse.

In a witty nod to the original period, lighting designer Ian Scott creates the bright, 360 degree lighting of a sitcom soundstage.

The production is generously given a West End-sized cast, with swings and covers playing numerous supporting roles. 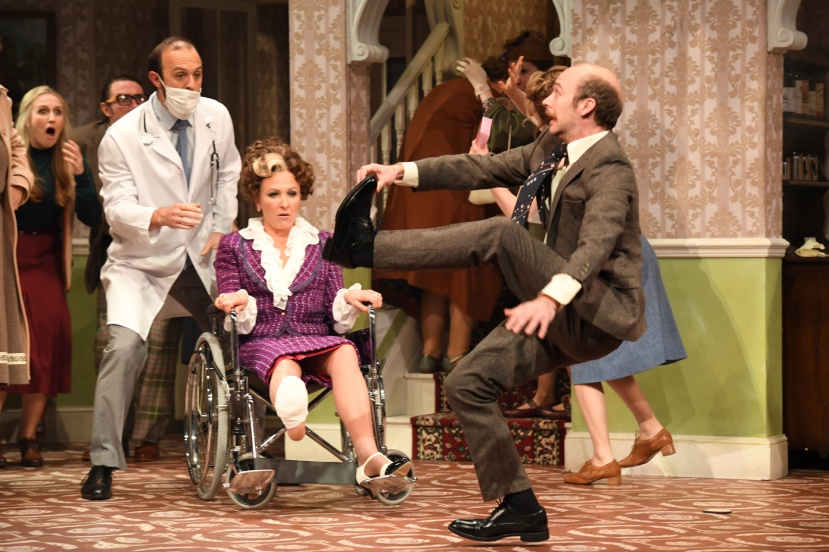 In an expertly calibrated lead performance, Stephen Hall brings out all of Basil’s ticks, frustrations and idiosyncrasies with flair. In a role that must be played on the knife’s edge all night, Hall somehow manages to go over the top without going over the limit of what makes Basil so hilarious. Hall’s Basil remains an ill-tempered brute who is nonetheless oddly sympathetic. Basil can be vulgar and violent, yet Hall keeps him human by showing what makes him tick.

A Sydney-based actress who is all too rarely seen on the Melbourne stage, Blazey Best is a wicked delight as Sybil. Mastering Sybil’s toffy manner of speaking with barely moving her mouth, Best scores many a laugh with her vocal intonation and grating laugh.

In another role that could so easily descend in to parody, Syd Brisbane is hilarious as well-meaning porter Manuel. Brisbane’s performance is pure comedy, deftly delivering a steady stream of laughs while showing none of the inner workings of the performance. The authentic feeling of the 1970s setting shelters the decidedly non-PC characterisation from a racist slant. 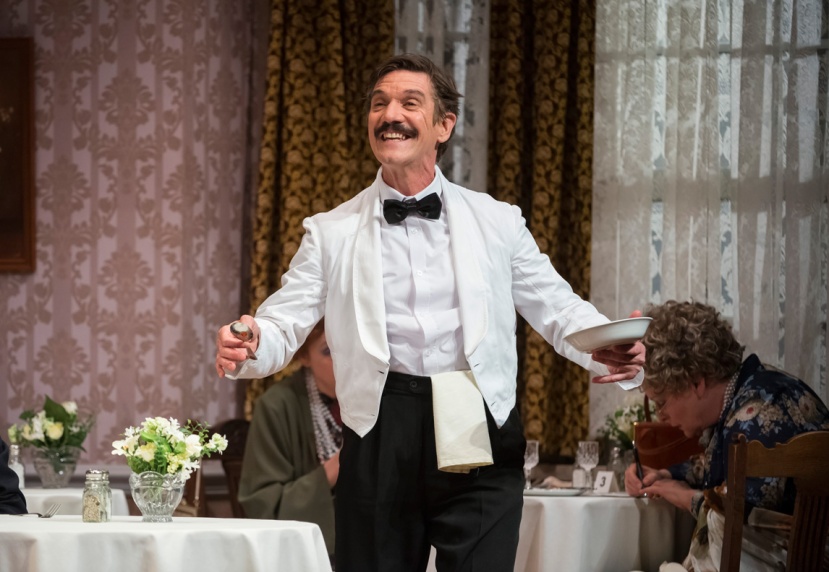 The spitting image of the original Polly, Aimee Horne has the perfect wide-eyed countenance to convey the saintly patience with which Polly counters her ongoing feeling of bewilderment at the insanity of her workplace. The only temperate, balanced employee, it is a nice touch to see that Polly has learnt Spanish to be able to actually communicate with Manuel.

Channelling the bristling best of Dame Maggie Smith, Deborah Kennedy is an absolute delight as prickly guest Mrs Richards. Demonstrating that the best comedy comes from being serious, Kennedy creates a brutally unflinching portrait of a difficult, self-righteous woman.

Fans of Fawlty Towers are sure to enjoy this respectfully created, carefully polished homage. Fawlty Towers Live will earn roars of laughter from devotees and newcomers alike.