The premiere Melbourne has been waiting for all year has finally arrived and it’s an absolute gem.

Its status as the only new musical to open in Melbourne this year is far from the only factor contributing to the heady appeal of Once. A distinctly Irish celebration in a city with a healthy Irish background (my mother was a Murphy), Once combines the charm of the blarney with a pared back, post modern music theatre aesthetic that is as raw as it is charming. The adjective musical in musical theatre is generally bandied about quite freely, but in this case it could not be more apt. Here is a story about music, told through music that the performers completely create themselves. Music is the lifeblood of these characters; it’s in their DNA. In an age of programmed synthesizers and click tracks, Once gives us the thrilling experience of live music played with verve and gusto right before our eyes.

As in the 2006 movie, an Irish musician, simply referred to as Guy, meets a Czech musician, Girl, and so begins a tumultuous week as their unconventional love story plays out. Girl meets Guy just as he despondently decides to throw in his music and settle for a small life of vacuum repairs. Enda Walsh’s book swings between briskly economical and deeply ponderous. Back-stories deftly come to light by way of lightning fast exposition, giving breathing time for the central love story to blossom and resonate. The humour is delightful, and is used cleverly to draw in the audience in the opening scene. An amusing thread that links the characters is their interest in the Irish soap opera Fair City, which Girl and her Czech friends watch to learn English. In a clever touch, dialogue in Czech is indicated by Czech surtitles, which is inverted in a glorious act two moment where the audience alone is privy to Girl’s confession of her true feelings.

Director John Tiffany has created that rare Broadway musical that draws us in rather than knocking us over the head. Respecting the audience’s intelligence, Tiffany allows the facial expression and body language of his actors to speak volumes. A spontaneous, impromptu vibe adds to the immediacy and believability of the story. A rapid pace is facilitated by actors passing props to those in the scene, a device which also provides laughs for the Theatresports feeling it suggests. It is not just for expediency that designer Bob Crowley has placed the action on a single set. That set is a pub, and, with the performers sitting side stage with their instruments throughout, there is a strong sense that we are being regaled in a session of grand story telling.

Glen Hansard and Markéta Irglová have expanded upon the music and lyrics they wrote for the film, crafting a score that feels as inevitable and unforced as the rest of the show. The trump card of Oscar-winner “Falling Slowly” is played very early, a clear component of ensuring the audience fall quickly for the lead characters. After an entertaining opening to act two in which the band almost implodes before it even begins, we are treated to wonderful ensemble number “When Your Mind’s Made Up.” A true highlight comes later in act two when the company sing an a capella reprise of “Gold” in heavenly near-whispered tones. Lighting designer Natasha Katz draws the eye with pinpoint accuracy and paints the towering rear walls in gorgeous, mood-enhancing shades.

To say that the integration of live music, song, storytelling and dance requires a troupe of performers with a broad set of unique, finely honed talents would be something of an understatement. The cast works together with camaraderie and trust that belie the early stage of the season, and the music is so skillfully played that it is all too easy to forget that the performers have no sheet music and no conductor. Madeleine Jones gives a star-making performance as the wide-eyed, straight-shooting Girl, winning every heart with her earnest, deadpan performance and her lovely singing and playing of piano. Jones successfully conveys Girl’s every emotion despite the character’s defensively impervious exterior. Her joyful reaction to the onstage audience’s reaction to Guy’s music during act one finale “Gold” is priceless. 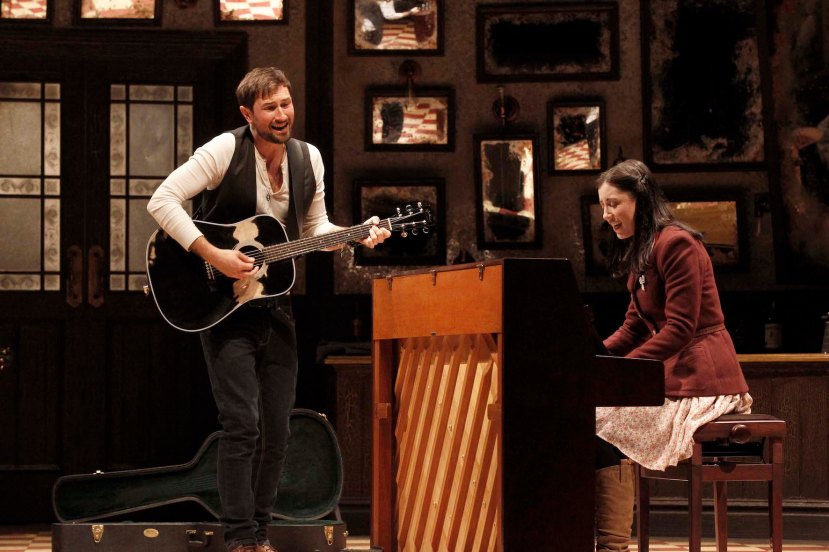 While it remains a disappointing and puzzling decision to import an actor, it cannot be denied that Tom Parsons fits the scruffily handsome and sweetly underplayed role of Guy. Parsons’ confident proficiency on guitar and highly impressive vocal range make Guy’s musical success completely believable. Parsons draws us towards the troubled, self-doubting character, making us yearn for his success in music and love. Redoubtable stage veteran Anton Berezin is superb as the reluctantly supportive Bank Manager. Colin Dean tears up the stage as raucous musician Billy. Amy Lehpamer plays the role she was born to play as she puts her highly accomplished violin skills to perfect use as the assertively sexual young Czech woman Reza. Brent Hill is unrecognisable as loutish young Czech Švec, a hilarious role he plays with infectious gusto and abandon. As Girl’s weary but resilient mother Baruška, Susan-ann Walker scores with a perfectly judged monologue about not living in fear. Summer Moore was utterly adorable on opening night as dear little Ivanka. Paul Watson, Gerard Carroll, Keegan Joyce, Jane Patterson and Greg Stone completed the opening night on-stage cast

Not the show for theatregoers who prefer liberal servings of sequins and tap shoes, Once is the thinking fan’s musical. Arrive early for a wee tipple on stage, then sit back and prepare to be mesmerised by the magic of Once. Once plays at Princess Theatre, Melbourne. Bookings, through Ticketmaster, are currently on sale to 31 December 2014. Man in Chair also reviewed the original Broadway production of Once. Photos: Jeff Busby