Surreal and deliberately inscrutable, production and performance of the David Bowie musical Lazarus respects and subtly celebrates the great artist’s talent and legacy. 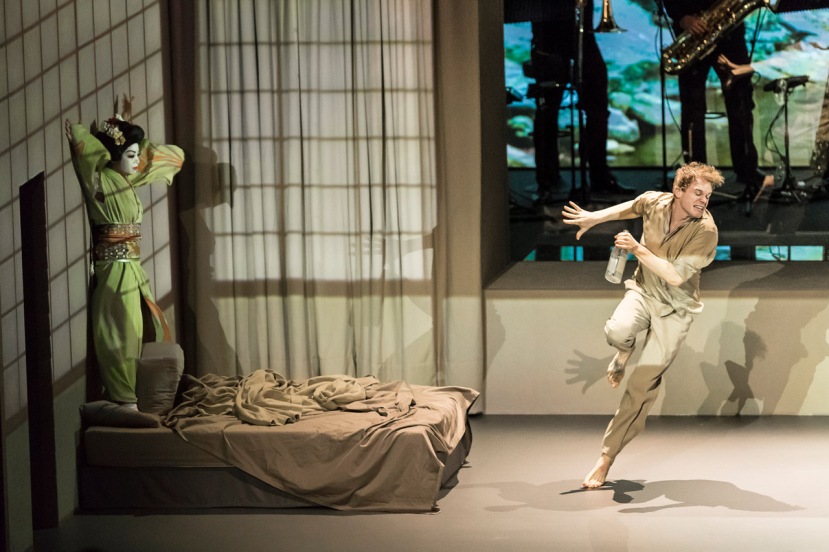 Bowie’s premise, fleshed out by book writer Enda Walsh, is the abstract mindscape of tortured soul Thomas Jerome Newton, central character of The Man Who Fell to Earth. Newton exists in a gin-addled haze in his East Village apartment, unable to die, missing his great love Lily, and yearning to return to his home planet.

Early book scenes seem to be unlinked, introducing Newton’s young housekeeper Elly and her partner Ben, an associate of sorts named Michael and a serial killer named Valentine. Newton converses first with Maemi and then with Girl, apparitions who originate in music video clips on the television. Gradually, Newton’s world comes together, but interpretation is largely in the eyes of the audience.

While the context puts the musical on stage, it is the music that is the chief attraction. Bowie’s score mines his extensive back catalogue, with just three brand new songs written for the show, but it is far from the oft-derided jukebox musical style. Lyrics are not subverted for contrived plot and character purposes, but rather songs are chosen for the way they resonate in certain situations. Only two numbers, “Absolute Beginners” and “Heroes,“ could be considered hits familiar to the general public.

Musical supervisor and orchestrator Henry Hey has overseen a superb recreation of the score, which is not only sung by outstanding vocalists but is played by an obviously handpicked band of eight excellent musicians. Sound design, by Tony Gayle, is at musical theatre volumes but nonetheless creates an immersive rock concert vibe.

Director Ivo van Hove works closely with designer Jan Versweyveld to produce a continuous series of impactful visuals. Versweyveld begins with a blank canvas, in which the walls, ceiling, bedding and Newton’s costume are all the same milky brown, with video designs by Tal Yarden and, to a lesser extent, costume design by An D’Huys adding colour and texture.

Choreographer Annie-B Parson works closely with van Hove to chart the energy levels of the characters and to allow the music to organically infuse the characters with movement.

As the waif-like Girl, Sophia Anne Caruso’s vocals have a mature, rich sound that belie her petite frame.  Michael Esper presents Valentine’s sadism as being tinged with subdued sociopathic glee. In the role of Michael, the imposing masculine presence of Tom Parsons (Guy, Once, Melbourne) makes his character’s fate all the more shocking.

More a cultural experience than a traditional piece of musical theatre, Lazarus represents a communal memorial to the brilliance of Bowie.