StageArt: In The Heights review

Thank goodness for independent theatre producers. While commercial producers churn out rehashed retreads, StageArt have the courage, vision and passion to present this highly original, Tony Award-winning musical that is as much fun as you can have at the theatre.

I saw In The Heights on Broadway, and went a second time in the belief that it would never be seen in Australia. I have never been so glad to be wrong.

Approaching this production, there was a niggling fear that this cherished musical would prove too fiendishly difficult and too culturally inaccessible for the local theatre scene. Highly driven, exacting producers Katherine Armstrong and Robbie Carmellotti have galvanised the work with a series of wise choices. Rather than just focus on the dance (which is of an amazing standard), they have employed an insightful, meticulous director, an expert music director and, best of all, have hand picked a dream cast of incredible triple threats who suit their roles to perfection.

A chief accomplishment is the extraordinary level of integration of production elements. It is clear that every member of the cast and creative team is on the same page, from the authentic props to the clever design to the whirling, singing chorus members who are always in character. 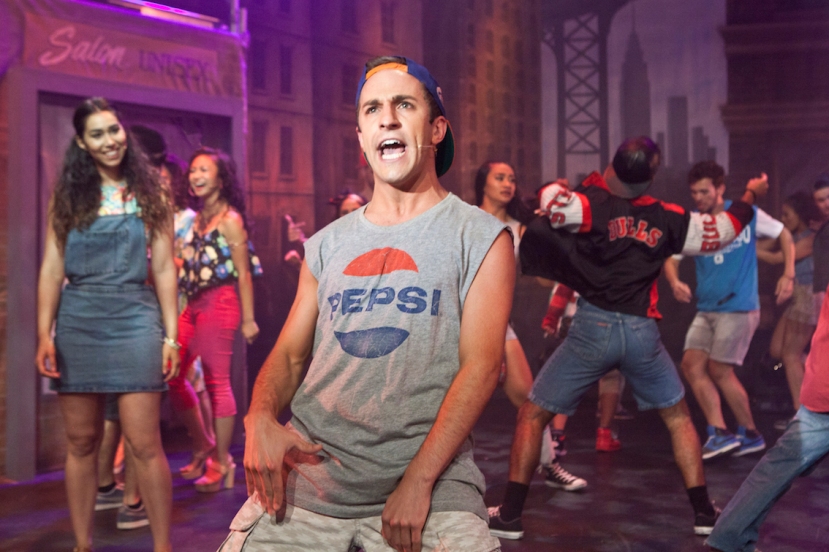 Winner of the 2008 Tony Award for Best Musical (as well as Best Score, Best Orchestrations and Best Choreography), In The Heights is set in Manhattan neighbourhood Washington Heights, where a close knit Hispanic community face a tumultuous period of change during a particularly hot summer. The hip hop/rap/salsa sound of Lin-Manuel Miranda’s score is as surprising as it is electrifying, but if the score is radical, the storyline is rather more traditional. As addictive and catchy as the music is, the lyrics are even more ingenious, featuring dazzling internal rhymes and intricate speech rhythms.

No background is needed to meet and enjoy these endearing characters. You know you have the audience fully engaged when they let out whoops of joy at the opening act two sight that two characters have spent the night together. When the story takes a melancholic turn in act two, the audience is fully absorbed and respectful of the drama.

Director James Cutler finds the perfect balance between the fever pitch energy of the cast and the control and focus needed to sell the characters and tell the story. Yvette Lee’s dazzling choreography is intricately woven throughout the action. Musical director Cameron Thomas makes juggling the range of styles and the lightning tempos seem effortless, producing a terrific sound from six musicians. When the combined elements of acting, dance and song really take flight, such as in act one finale sequence “The Club” and “Blackout,” the effect is truly thrilling.

All aspects of design provide high quality support to the performances. Merinda Backway’s sets make extraordinary use of the tight stage space to place the action clearly in its uptown locale. Kate Sinclair’s costumes, of which there are a great number, are a key aspect of each character and their arc. Jason Bovaird basks the stage in the orange glow of oppressive heat, also creating ongoing visual interest with innumerable lighting cues that match the excitement and modern feel of the music. Marcello Lo Ricco’s sound design is a little loud at times, but reliably picks up every word, an asset that is of extra value in a new show with particularly dense lyrics.

Overall, the production elements and performances are at a level that would fill a 1000-seat theatre (or higher), giving the show incredible impact when viewed in the relative intimacy of Chapel off Chapel. 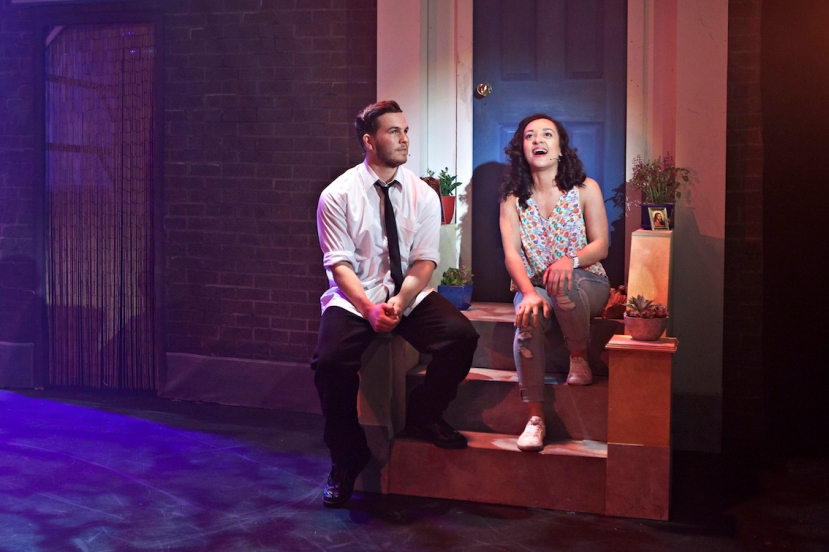 Stephen Lopez was born to play Usnavi, capturing the lead character’s loquacious, compassionate nature. Lopez instantly bonds with the audience, gaining their trust and affection as he leads the way through the intertwined lives of the local residents.

Where a regular musical may have one I wish song, for its chief protagonist, act one of In The Heights gives a number of characters a moment in the spotlight to soar through a ballad or rap about their hopes and dreams.

Charming young actress Anna Francesca Armenia gives a lovely performance as Nina, a young woman struggling to fit in and succeed at an Ivy League university. Projecting warmth and affection, Clarence Marshall and Bianca Bruce ground the younger characters as Nina’s proud, conservative parents Kevin and Camila. Both Marshall and Bruce are excellent singer actors; Marshall shows Kevin’s vulnerability in “Inútil” (Useless), while Bruce shows her fiery side when Camila takes over in “Enough.” 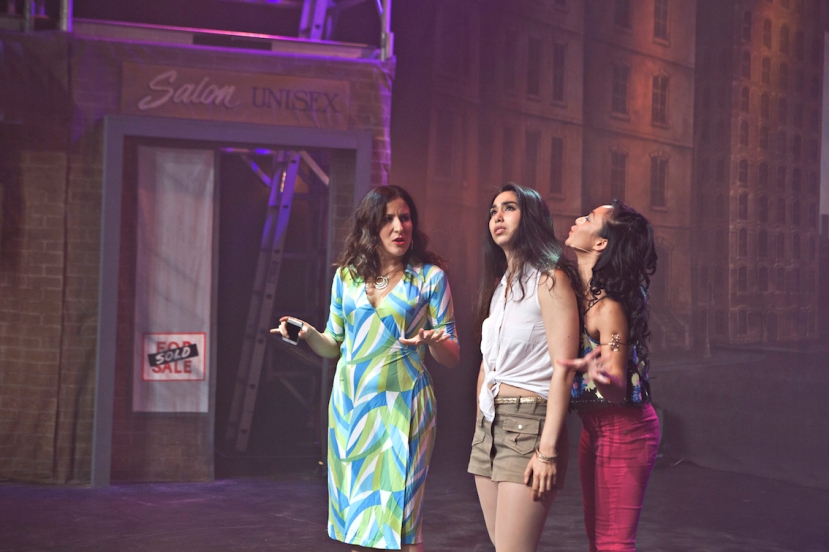 In a very welcome stage appearance, Francesca Arena provides the heart of the show in Usnavi’s dear Abuela Claudia. Arena immerses herself in the role, creating a nuanced characterisation of a weary, beloved elderly lady. She flexes her considerable vocal strength when Abuela breaks into song with “Pacienca y Fé” (Patience and Faith). 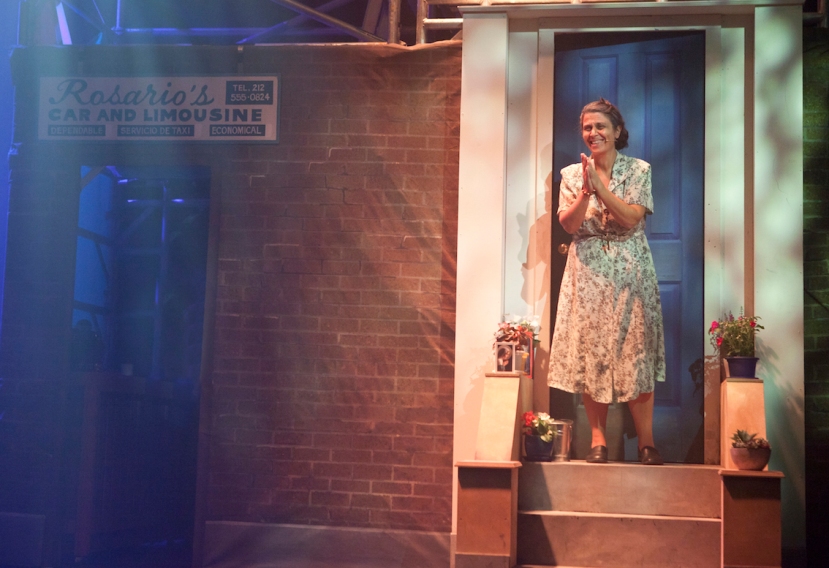 The local hair salon, in the process of closing, is populated by boss Daniela and employees Vanessa and Carla. Laura Marcucci is the sassy, curvy Daniela, a driven woman with a loosely concealed heart of gold. Experienced belter Marcucci really shines when Daniela lets fly in act two and inspires the full company into an impromptu parade “Carnival del Barrio” (Neighbourhood Carnival). In the key role of Vanessa, Bianca Baykara displays impressive acting talent as she manages to portray a young woman who is plagued by low self-esteem despite her exotic beauty. 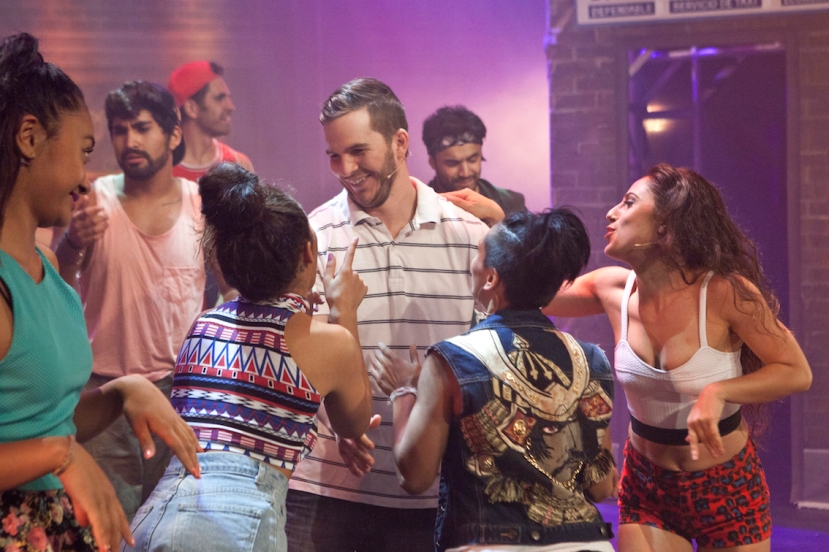 Many of the wow moments in the choreography come from awesome break-dancer Peter Sette, playing Graffiti Pete. Sarah Calsina is cutely naïve as devout Christian Carla. Gareth Jacobs gives Piragua Guy a merry twinkle in his eye, and impresses with his strong vocals in “Piragua.”

In The Heights is must-see music theatre.