Anchored by an exceptional lead performance from Mike Snell, Saturday Night Fever features sharp choreography, excellent musical performances and a darkly dramatic story that is enhanced by the intimate space of Chapel off Chapel.

Having quickly established themselves as the ones to watch, independent Melbourne company StageArt have set the bar high for their prolific 2016 season. Bringing Melbourne audiences exciting boutique productions of rarely seen (or never seen) musicals, the company has exactingly high performance standards, particularly related to dance, and is well ahead of mainstream producers in promoting cultural diversity.

Anyone dismissing the musical Saturday Night Fever as a light 1970s nostalgia piece is sure to be surprised by the scope of the gritty drama behind the familiar dance floor images from the iconic 1977 movie. While Brooklyn is now seen as a trendy urban paradise in TV’s Girls, the 1970s Brooklyn of Saturday Night Fever saw working class families battle inflation, unemployment and a bleak world outlook. Differing races were mistrusted and women were treated appallingly. Alcohol and drugs offered an escape, but for these young characters dance was king, with Saturday night at local disco 2001 Odyssey the towering highlight of their week.

Rape, abortion and suicide are not the usual province of musicals, but Robbie Carmellotti’s direction has the cast work with great focus and drive in making the story’s twists believable and affecting. The book rushes some moments, particularly the mistaken revenge against the wrong gang in act two, but the cast’s commitment to the heart of the story never flags.

Carmellotti has each of the leads stand still centre stage and sing their big ballads (a practice known as “park and bark” in opera), and this less-is-more approach successfully forges a connection between audience and performers, increasing the impact of the drama.

Budget constraints impact the scenic design, meaning that some locations are mainly clear to those familiar with the film’s plot. Carmellotti adds to the visual interest by dressing the stage with ensemble members, giving the locations a lived-in look.

Lucy Wilkins’ costumes have an authentic 1970s style, with some of the flares, jumpsuits and wide ties providing what-were-they-thinking laughs of recognition. Tony’s signature white suit with black shirt is a highlight. While the men’s hair looks good, the lead females are, unfortunately, let down by poor quality wigs.

Quite possibly the industry’s hardest working lighting designer, Jason Bovaird is in his element here, with lighting effects being so integral to the locations. A feature of the scaffolding stage set is the use of two square frames of LED tubes. These tubes, in combination with the full rig, clearly involve a mind-boggling number of cues. Bovaird aids storytelling by pinpointing characters in white light, and his work is crucial in the delivery of the effect of the dramatic bridge death.

The quadruple threat members of the ensemble also play the score, with music director Tony Toppi on keyboard and Chris Duffy on drums being the only permanent musicians. This conceit is well integrated, in that the actor/musicians give off plenty of attitude when playing their instruments rather than retreating the sidelines. Given the demands on the cast, the musical performances come off brilliantly, and full company vocals also sound superb. In a very nice touch, each musician has their own bow, with the actor/musicians then joining the company for the cast bows.

Coming from one the best-selling soundtracks of all time, the Bee Gee’s songs are a definite attraction of the show. Originally played as background music, they do not all work as music theatre songs, with the clarity of the lyrics on stage at odds with the Bee Gee’s frequently unintelligible renditions of the songs.

Luke Alleva’s tightly drilled choreography is a thrill to watch. When the full company is in motion, the precision and the energy levels are amazing. The climactic dance contest is cleverly choreographed, with the Spanish pair, as intended in the story, clearly the best. “Open Sesame,” the Arabian-themed dance entry performed by Daniel Ham and Alexia Brinsley, is hilarious. 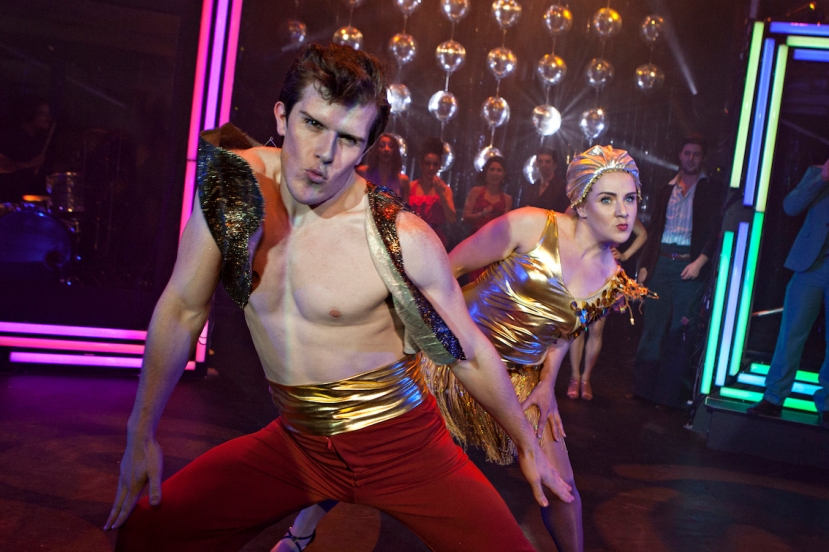 As hip-swiveling Tony Manero, Snell may be a little far from 19 but has an abundance of youthful energy and stage presence for the role. Barely offstage the whole night, Snell successfully bonds with the audience, making the arrogant, unsatisfied young man a likeable antihero. Snell’s dancing is excellent and his singing is tender.

Sheridan Anderson gives a solid performance in the complex role of Stephanie, conveying the conflict between the character’s Brooklyn origins and her social climbing reinvention. Anderson and Snell create believable chemistry, and both characters’ frustration at not being to connect physically, apart from on the dance floor, is clear. Anderson’s delivery of “What Kind of Fool” makes it one of the more successful song selections for the story.

In what I is arguably her strongest stage appearance to date, Elise Brennan is compelling as the skittish, sexually charged Annette. Brennan’s strong acting and singing are topped off by her incredible dancing; I found it very hard to take my eyes off her in the company numbers.

Dean Schulz nails the role of sniveling youth Bobby, plugging away at the character’s tortured self-pity so that his tragic fate is believable. Schulz sings modified hit “Tragedy” with sensitivity, and impresses mightily on the saxophone. Rounding out Tony’s sidekicks, known as “The Faces,” skilled music theatre practitioner Duane McGregor has plenty of bravado presence as Joey and Joseph Spanti puts a cocky sparkle in the eye of Double J. McGregor and Spanti are also strong dancers.

Saturday Night Fever may be missing some of the gloss of big budget productions, but for affordable music theatre it is very hard to beat.

Saturday Night Fever plays at Chapel off Chapel until 28 February 2016.

2015 StageArt hit In The Heights returns to Melbourne 11-12 March 2016. Later this year, StageArt presents Titanic the Musical and the Australasian premiere of The Color Purple.