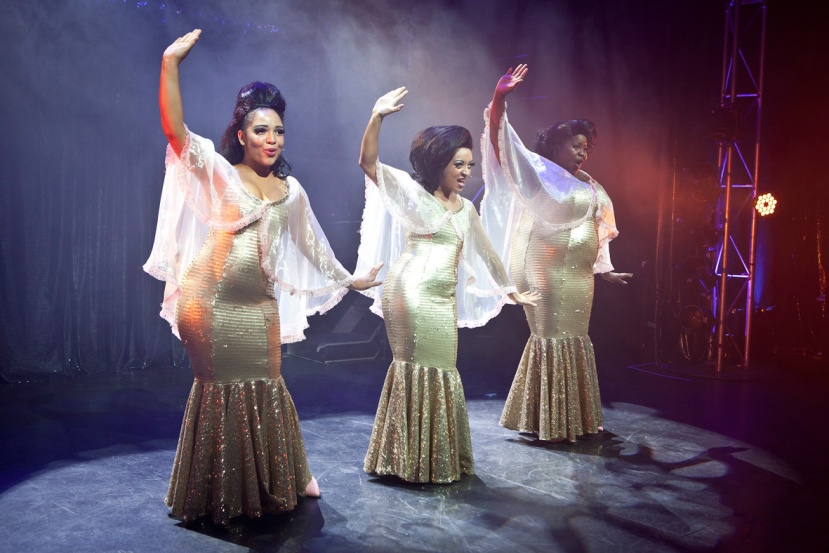 A Tony-winning hit in the early 1980s, Dreamgirls is widely known from its high profile 2006 movie adaptation. If casting a full company of African-American performers deterred local producers from ever mounting the show, StageArt deserve extra credit for their vision in sourcing performers who not only look the part but are also highly talented.

The distinctly American story follows the swift rise and dramatic implosion of a girl group during the time that R&B music crossed over into the realm of popular music. Loosely based on Motown producer Berry Gordy and Diana Ross and The Supremes, the 1960s scenes throughout act one make for quite a thrilling roller coaster ride, while the 1970s problems faced by the characters in act two have a mellower edge. 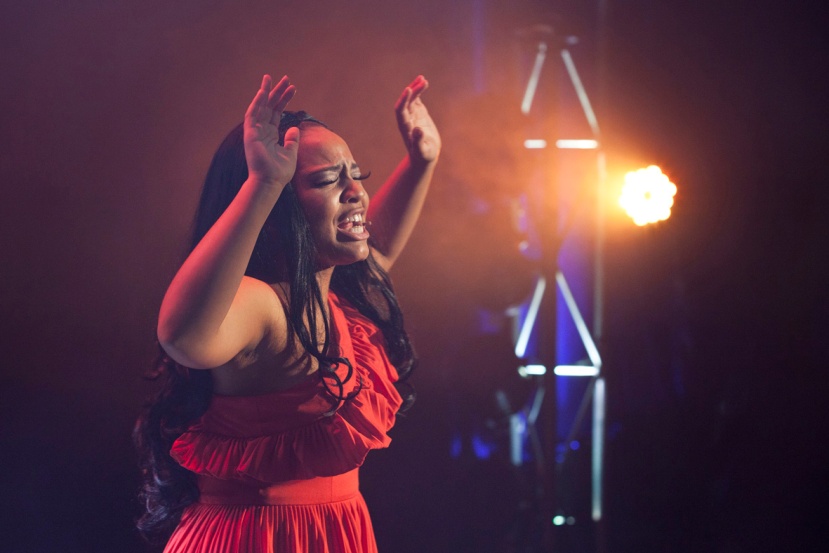 Director Terence O’Connell has cast the show’s distinct characters extremely well, and propels the action forward with a cinematic flow between scenes. A good proportion of the blocking has performers facing forwards, but more of this is needed overall so as to allow a stronger connection between audience and performers. While younger members of the cast will surely gain in confidence as the season progresses, there was perhaps the need for more guidance in fully developing their characters and managing their energy and focus. Given the amount of acting, singing, dancing, costume and wig changing involved, it is an incredible result overall, particularly after only one preview performance.

A clear highlight of the production is Daniel Harvey’s creative, spectacular, intelligent costume design. The countless outfits not only look wonderful but are also a key aspect of the story telling, tracing the journey from homespun frocks to glamorous gowns, with some ingenious fast changes along the way. Lucy Wilkins’ wigs complement the styles perfectly. Some of the transformations achieved in the side stage wings would take hours in a photo shoot environment. 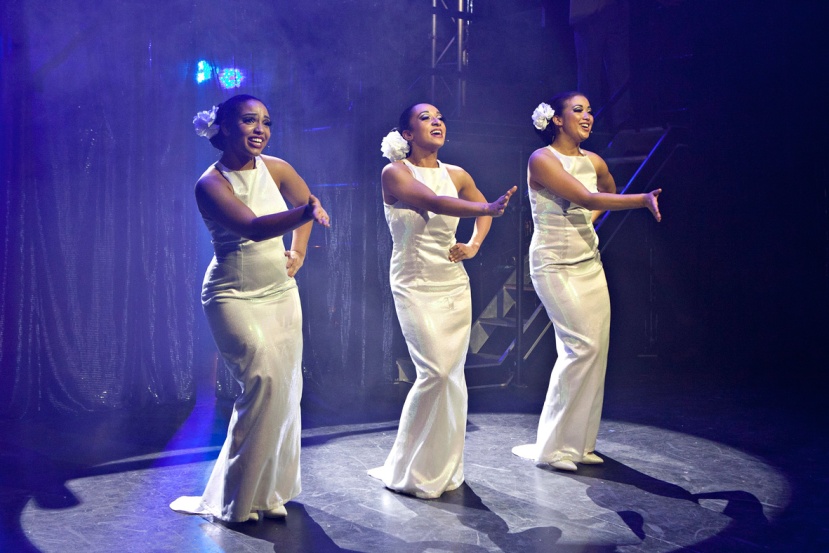 Jacob Battista’s black scaffolding set design is not particularly inspired, but it does make amazing use of the small space. Acres of glittering black fabric give the venue the semblance of a proscenium arch theatre, somehow accommodating 19 performers and 9 musicians.

Choreographer Darren Stack performs miracles in the tight space available for movement, delivering crisp, well-rehearsed moves that are highly evocative of the era and are fun to watch.

In an extraordinary stage debut, Thando Sikwila is perfectly cast as Effie White, the troubled young woman whose natural talent is undermined by paranoia, both valid and unfounded. Sikwila captures Effie’s diva-like surly petulance as well as her doll-like sweetness when things go her way. Act one builds to all-time classic torch song “And I Am Telling You I’m Not Going,” and Sikwila brings down the house, with resounding applause lasting through the next song all the way to the interval break. 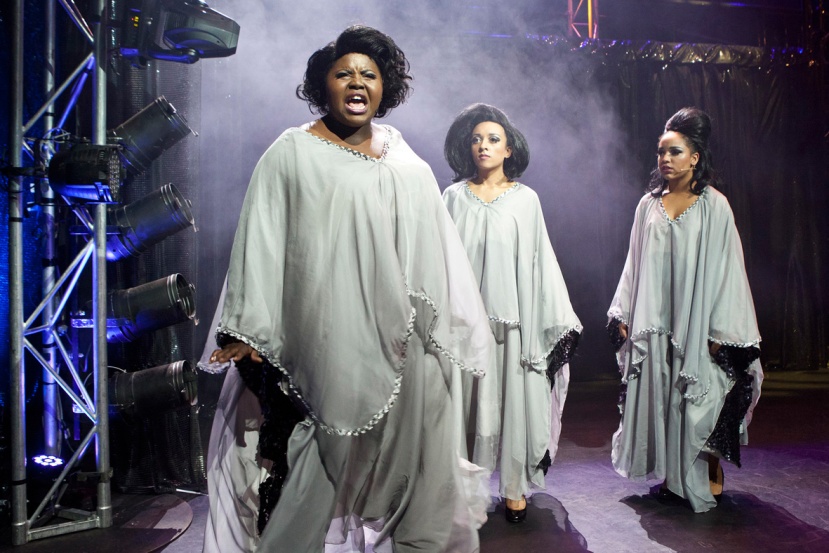 As Deena Jones, talented young actress Anna Francesca Armenia is styled to closely resemble Miss Ross, also recreating the famous star’s winning smile with flair. Armenia sings the role well, and while her character’s promotion to lead singer is believable, later scenes call for a rise in diva-like vanity. This distinction is sure to develop as Armenia inhabits the role over the season.

Zenya Carmellotti is adorable as Lorell Robinson, projecting an engaging innocence and excitement as the eager young singer. The character of Lorell is lumbered with an extended act two scene with philandering partner Jimmy that is not all that compelling, but Carmellotti brings plenty spunk to her musical performances.

Canny casting choices delineate the range of male characters. As car salesman turned producer, Winston Hillyer has a commanding bass voice that strongly supports Curtis Taylor Jr’s authoritative manner. While his voice is highly expressive, Hillyer needs to cheat front far more often so as to engage with the audience and raise the impact of his character’s cheating and double-dealing ways. 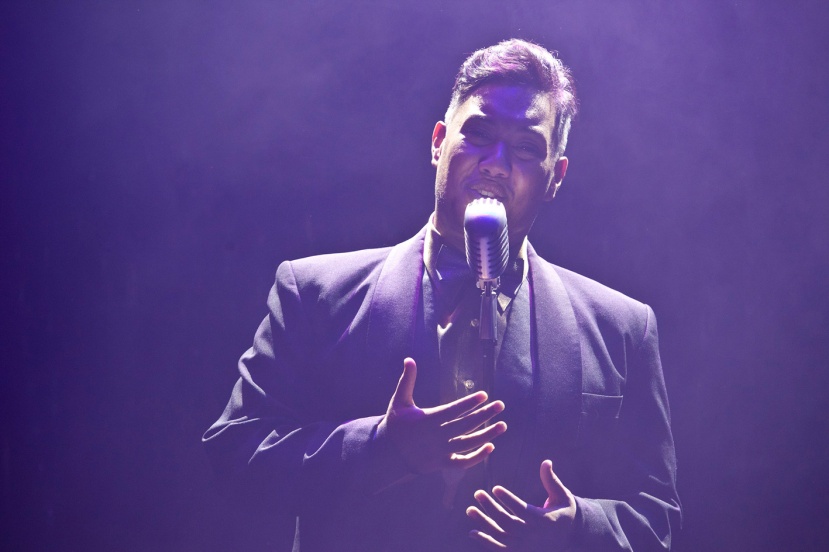 Djon Alexander is excellent as C. C. White, Effie’s sweet song-writing brother who eventually stands up for himself to defend his contribution to the artists’ musical success. Gareth Jacobs is in terrific voice as egotistical R&B star Jimmy Early. Although Jacobs’ style has a crowd-pleasing edge, he does not quite nail the character’s self-assured, womanising ways. Augustin Tchantcho provides solid support as hard-edged long-term music artist manager Marty.

Small quibbles aside, this visionary production has great appeal. Music theatre aficionados should not miss this rare chance to experience Dreamgirls.

Dreamgirls plays at Chapel off Chapel, Melbourne until 14 June 2015