A bevy of young and exciting talents whip the crowd into a frenzy in the welcome Melbourne premiere season of Heathers the Musical.

The Australian production is a total improvement on the 2014 off-Broadway original, featuring vastly better scenic design, a terrific cast and audacious direction by Trevor Ashley. The characters are vicious, passionate, lewd, uninhibited teenagers, and the cast here achieve all this and more in ways that the restrained, PC New York production could not attain.

While Ashley’s direction peppers the action with plenty of salacious laughs, the dramatic tone is also very well judged. The original production was trying to be a parody of something that was already a comedy, albeit a pitch black one. These characters take high school seriously, and Ashley has the cast immerse themselves in the characters and high school life without needing to indulge in a smug knowing wink to let us they are in on the joke. Playing it straight allows the dramatic moments to land and makes the comic moments even funnier.

Based on the 1988 movie Heathers, a long time cult favourite, Laurence O’Keefe and Kevin Murphy’s book follows the plot closely and includes all the quotable lines. O’Keefe and Murphy’s hummable songs are instantly accessible and contain just as many laughs as the book scenes. Act two duet “Seventeen,” a bit of an anthem of the show, is a highly memorable tune.

Facing the horror of senior year, outsider Veronica sells her soul for a moment with the popular clique, inhabited by three beautiful, but black-hearted, girls named Heather. New kid J.D. soon exerts a deadly influence over Veronica as the pair starts to wipe out the worst of their high school brethren. 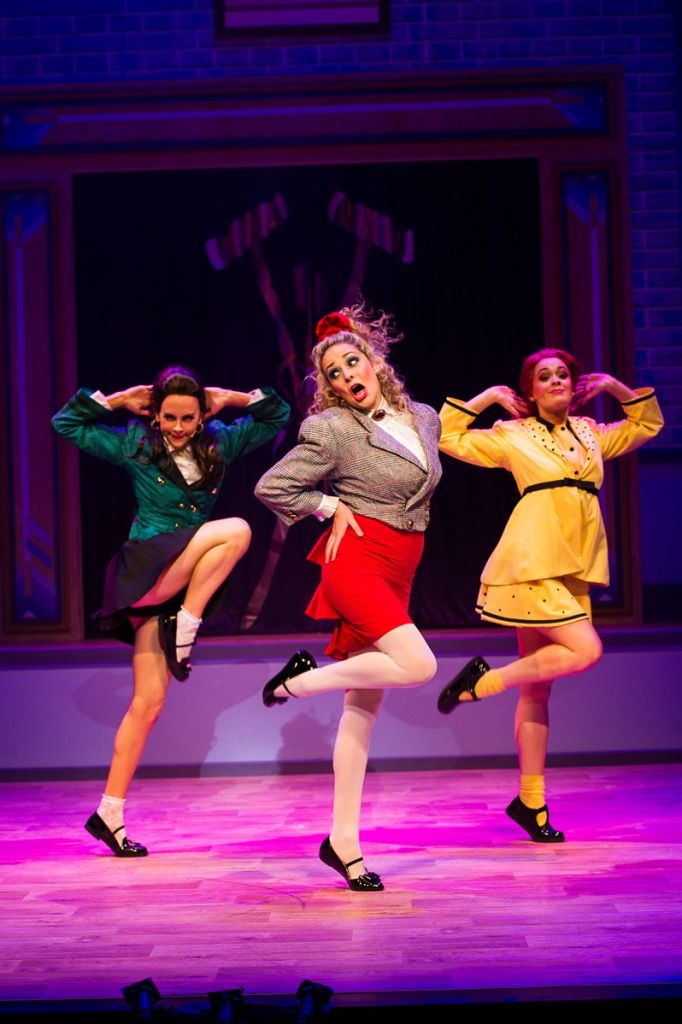 Significantly increased in scale from the opening season at Hayes Theatre, Emma Vine’s attractive set design makes inventive, non-stop use of several sets of lockers, which can turn into closets, Slurpee machines, beds and even coffins.

Angela White’s vibrant costume design references the movie, and the 1980s, scoring laughs without being over the top. Costuming is part of the storytelling when Heather Duke, previously in emerald green, takes over the red stylings that come with the precious red scrunchie of deceased Heather Chandler.

Musical director Bev Kennedy leads a rocking band of five, with herself on keyboards. Evan Drill’s sound design occasionally allows the band to overpower vocals, and occasionally missed microphone cues on opening night, but these aspects are sure to be corrected.

Her star well on the rise in Sydney, Hilary Cole finally makes a splash in her town of Melbourne. Perfectly cast as Veronica, Cole conveys the spiky torment of Veronica’s inner demons and unleashes a terrific, powerful belt in her singing.

Cole is well matched by fellow rising talent Stephen Madsen as the devilish J. D. In a raw but refined performance, Madsen maintains a driven intensity and detached coldness that make J.D’s machinations believable. Madsen and Cole enjoy passionate chemistry; there is no doubt that the two are destined to be stars.

The production benefits from the presence of well-established talent Lucy Maunder, who brings an extra touch of class and polish to her role as alpha bitch Heather Chandler. Maunder’s deadpan performance of Heather’s minimalist dancing at Ram’s party is just one hilarious highlight.

The quality casting continues with the fellow Heathers. Scoring arguably the best arc of the show, Hannah Fredericksen finds all sorts of subtle touches as the bullied, bulimic Heather Duke, before letting rip as the newly vicious, red-clad successor to the Heathers crown. A vivacious triple threat, Rebecca Hetherington successfully lands a serious moment in act two as Heather McNamara speaks out about her hidden depression in “Lifeboat.”

Lauren McKenna has fun with the distinct dual roles of Martha Dumptruck Dunnstock and hippy do-gooder Ms Fleming. A lightning fast change between the characters in act two is as funny as it is impressive.

Ensemble members Sage Douglas, Mitchell Hicks, Heather Manley and Stephen McDowell each make the most of their chance to shine in featured roles.

Filled with infectious music and laughs, Heathers is a guilty pleasure that music theatre fans are sure to enjoy.