Lyric Opera of Melbourne: Our Man in Havana review

Lyric Opera of Melbourne has unearthed another treasure with the Australian premiere of Malcolm Williamson’s 1963 opera Our Man in Havana.

Part spy thriller, part devilish black comedy, Our Man in Havana has enough scintillating plot for half a dozen operas. Based on Graham Greene’s 1958 novel, which was also the source for the classic 1958 movie, the opera pokes fun at the serious nonsense of spy agencies whilst also telling a ripping yarn of its own.

When Cuban-based English vacuum cleaner salesman James Bramble is talked into taking an extra wage as a spy, he finds it all to easy to invent agents’ names and draw secret machines that he has “discovered” in Havana. The plan backfires when real men start being killed, including close friend Dr Hasselbacher, and Bramble’s own life is put under serious threat.

Unlike the abstract soundscapes of many modern operas, Williamson’s score is an instantly accessible blend of ensemble scenes that bring to mind grand opera, recitative accompaniment that could be the soundtrack of a spy thriller movie, and melodies as gorgeous as those by Richard Rodgers. The ensemble provides hummable vocal interludes that provide welcome moments of relief from the tension of the central plot.

Dressed as flamboyantly as the cast, an orchestra of 22 musicians plays Williamson’s original orchestrations under the leadership of Pat Miller, artistic director of Lyric Opera. Miller’s exacting preparation gives him supreme confidence in leading a zesty performance of the wonderfully enjoyable score. While diction and projection are excellent, the unfamiliar lyrics are occasionally difficult to fully discern over the accompaniment.

Despite the challenges of acoustics, director Suzanne Chaundy has ensured that the storytelling is clear so that the twists and turns of the intriguing plot can be easily enjoyed.

Designer Lucy Wilkins has transformed the flexible space upstairs above the Athenaeum Theatre into a characterful Cuban club. Chaundy makes excellent use of this arrangement, spreading the action across the full width of the room, from the bandstand to the bar. In the absence of a proscenium arch, the venue’s doors are used effectively for exits and entrances

The pink and orange ruffles of Wilkins’ costume design may be a little bit stereotypically Cuban, but the attractive visual picture suits the larger than life scenario of the opera.

Joining the cast at the beginning of rehearsals, Martin Thomas Buckingham had only three weeks to learn the massive lead role of Bramble. This intense effort has been a resounding success, with Buckingham singing with rock solid confidence. Buckingham’s tenor voice has a rich, appealing tone, and his characterisation of Bramble is a deft blend of stiff-upper-lip seriousness and twinkle-in-the-eye comedy.

Bramble’s vivacious 16-year-old daughter Milly provides an ideal leading role for rising soprano Kate Amos. With wide-eyed expression and intricately styled blonde ponytail, Amos lifts the energy level whenever she is on stage. Milly’s act one aria about her beloved horse Seraphina gives Amos a delightful melody, and she sings it beautifully. 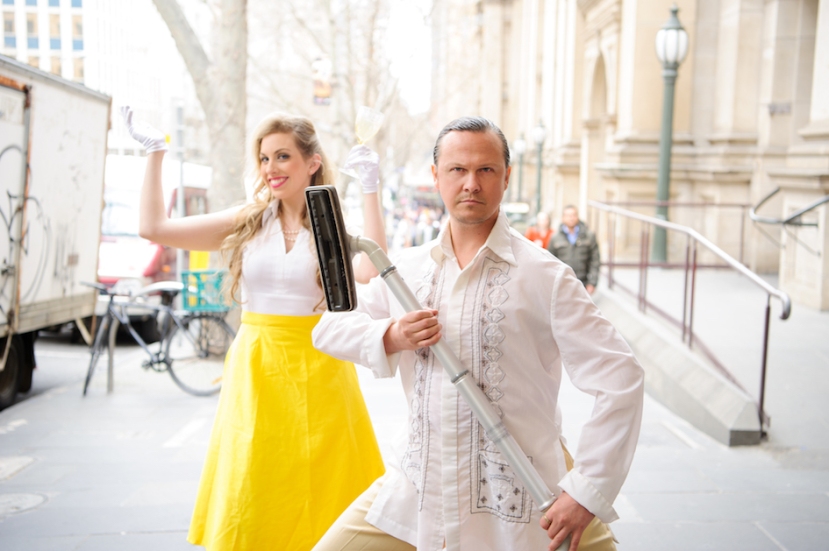 Aged with a paunch and grey hair, handsome young bass Matthew Thomas gives a compelling performance as Dr Hasselbacher. The significance of the role deepens as the opera progresses, and Thomas delivers an extremely powerful extended final scene for the ill-fated character.

Michael Leighton Jones brings a sense of gravitas to war veteran Hawthorne. Stephen Marsh gives an authentic look to Captain Segura, a gregarious but suspicious authority in the local military. Smartly attired in dark green and white, Elizabeth Stannard-Cohen demonstrates her extensive stage experience as she sings with polished flair in the role of Bramble’s new secretary Beatrice.

2016 Herald Sun Aria Finalist Raphael Wong is luxury casting in the small but crucial cameo role of Carter, a ruthless agent involved in the climax of the plot.

Besides singing strongly, the ensemble performs a range of duties, from dancing to cameo roles to scene changes. Kerrie Bolton makes a powerful impression in the act one chorus interlude. The ringing sound of Matthew Hyde’s gorgeous tenor voice is a pleasure to hear.

Our Man in Havana is modern opera at its most entertaining and enjoyable level. Local operagoers lucky enough to attend the season owe Lyric Opera of Melbourne a huge debt of gratitude for their creativity and passion

Our Man in Havana plays selected dates at Athenaeum Theatre 2, Melbourne until 24 September 2016.