The mighty Melbourne Ring Cycle dominated the 2016 year of opera, with an entertaining assortment of productions seen throughout the preceding months.

The biggest local opera news was the October release of the National Opera Review, initiated by George Brandis in 2014. Most notable amongst the Report’s 118 recommendations were an increase in funding of $24.1 million over four years, an improved balance between the number of international and Australian singers engaged in roles and a minimum number of productions required to be staged by each of the Major Performing Arts opera companies.

Given that Opera Australia is staging four productions in Melbourne in 2017, an increase to the recommended number, which is seven, would be most welcome. Opera Australia’s mainstage season in Sydney is truncated next year, as the Joan Sutherland Theatre at Sydney Opera House will be closed for renovation work from May to December. A future increase to the recommended minimum of 11 opera productions in Sydney would be ideal.

Opera Australia will appoint a new CEO by April 2017, as current CEO Craig Hassall gave six months’ notice of his resignation in late October this year. Hassall returns to London, where he has worked for many years of his career, to take up the position of Chief Executive of Royal Albert Hall.

The National Opera Review also indicated that Victorian Opera, well known for their innovation with technology and their prolific commissioning of new works, might join the ranks of Major Performing Arts opera companies.

In international news, Royal Opera has announced Oliver Mears as Director of Opera. Mears, who is currently Artistic Director of Northern Ireland Opera, will succeed Kasper Holten in March 2017.

Initially announced to star as Norma at Royal Opera and Met Opera in 2017, Anna Netrebko’s withdrawal from the role caused a reshuffling of divas. Acclaimed dramatic soprano Sondra Radvanovsky will star as Norma in the Met’s opening night of their 2017-18 season, while Netrebko will replace her in Il Trovatore at Vienna State Opera. Netrebko will now be seen in Il Trovatore and Tosca in the Met’s 2017-18 season. Fast rising soprano Sonya Yoncheva will play Norma at Royal Opera in September 2017, thanks to the Met releasing her from La Bohème.

After thrilling fans with a return to the stage in late 2015, it was disappointing to hear this month that much-loved Russian baritone Dmitri Hvorostovsky needed to withdraw from opera performances for the foreseeable future to focus on his health.

Man in Chair was lucky enough to see a trio of terrific opera performances in Europe in January 2016. Angela Gheorghiu returned to the production in which she originated the role of Tosca at Royal Opera, this time starring opposite Riccardo Massi (Cavaradossi) and Samuel Youn (Scarpia). Vital star Vittorio Grigolo played the Duke in La Scala’s incredibly grand production of Rigoletto (below). Revered baritone Leo Nucci and fast rising American soprano Nadine Sierra made La Scala history by singing an encore, the first time this had been done in 27 years. A dream team of Piotr Beczala and Elīna Garanča starred in the season premiere of Werther at Paris Opera.

A visit to New York in May brought the chance to enjoy Grigolo again, this time in Bartlett Sher’s sunny staging of L’Elisir d’Amore. The highlight of the trip, however, was the chance to see Roberto Devereux (below), in which Radvanovsky completed her trilogy of Donizetti’s Tudor Queens, the first soprano in the Met’s history to have achieved this feat.

Gale Edwards’ 2011 production of La Bohème, an annual summer fixture for Opera Australia at Sydney Opera House, made only its second appearance in Melbourne this year. Gianluca Terranova and Lianna Haroutourian were most appealing as Rodolfo and Mimì. A third sighting of Massi for the year came in Opera Australia’s staging of little known Verdi drama Luisa Miller. Soprano sweetheart Nicole Car shone luminously in the title role.

The sour note of the Melbourne Autumn season was the dreary new production of local Bizet favourite, The Pearlfishers. Underwhelming scenery, lackluster costumes and outdated direction of leads and chorus drew focus away from the lovely singing.

Sydney’s winter was warmed by John Bell’s vibrant new production of Carmen (below), updated to present day Havana. While the colour and choreography gave more of a music theatre vibe than an opera, the production is certainly entertaining, and tenor Yonghoon Lee gave his most enthralling Australian performance to date. While Opera Australia is bringing the new Carmen to Melbourne in 2017, it is disappointing to note that Melbourne will miss out on the third installment of Sir David McVicar’s Mozart/da Ponte trilogy, as Così fan tutte, seen in Sydney this year, is not scheduled for Melbourne at this stage. 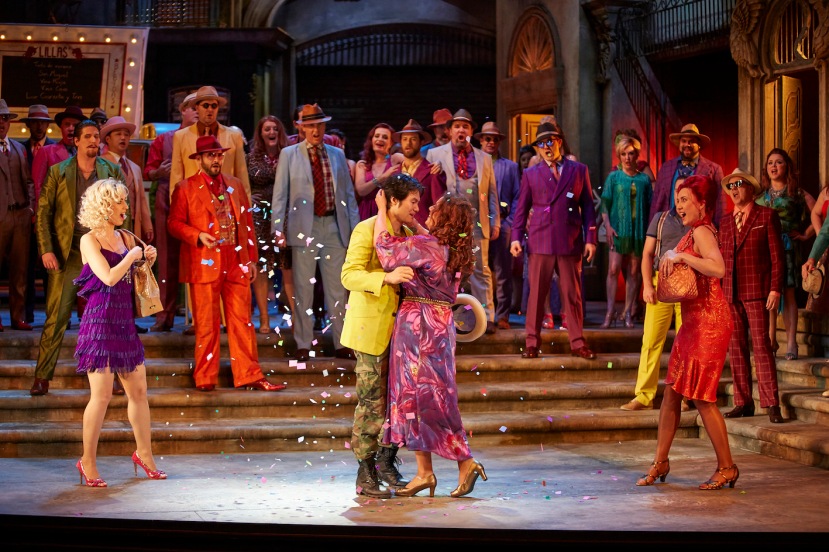 Opera Australia continued the tropical warmth with a revival of Prokofiev’s The Love for Three Oranges, performed by a dazzling cast of local singers.

In July, Opera Australia premiered its 2016-2017 touring opera, a charming production of The Marriage of Figaro directed by Michael Gow and sung by an appealing young cast.

All roads lead to Valhalla, and locals and tourists alike heeded the cry of the Valkyrie to return to State Theatre, Arts Centre Melbourne for the 2016 Melbourne Ring Cycle (bel0w). The production, particularly Neil Armfield’s direction, was as fresh and compelling as its 2013 premiere, and maestro’s Pietari Inkinen’s conducting was universally acclaimed. The unique mix of local and international singers was superb. American bass-baritone James Johnson paced his work carefully across the Cycle to great effect. Versatile Australian mezzo-soprano Jacqueline Dark contrasted feisty Fricka with her second role of a gentle Norn. Mighty baritone Warwick Fyfe was a clear favourite in Das Rheingold. American soprano Amber Wagner sang with voluptuous splendour in Die Walküre. German heldentenor Stefan Vinke drew on infinite reserves of energy and strength to sing the title role of Siegfried. Lise Lindstrom capped off an extraordinary role debut as Brünnhilde in Götterdämmerung.

World-conquering tenor Roberto Alagna visited Australia for a set of concerts Sydney and Melbourne in Concert. Whether it was a choice of preference or an underestimation of the local audience, the program for Roberto Alagna in Concert was disappointingly low on opera tunes. A far better reception greeted the performance of visiting Australian tenor Stuart Skelton, who sang segments from Parsifal, with Simone Young conducting the Melbourne Symphony Orchestra.

Victorian Opera continued their flair for premieres, touring production and children’s operas. Revered soprano Emma Matthews shone in new pastiche opera Voyage to the Moon. Acclaimed soprano Jessica Pratt made her third Australian appearance in as many years, singing the title role in Lucia di Lammermoor (below). Pratt’s spectacular performance was a clear attraction in this highly traditional staging.

Victorian Opera catered to very young audiences with a handsome staging of an edited version of Massenet’s Cinderella. Sung in English, The Pied Piper was even more accessible to children, and again featured the talented, appealing set of emerging artists that Victorian Opera has cultivated over the past couple of years. The company returned to the Palais Theatre for Laughter and Tears, a unique collaboration with Circus Oz. Powerful tenor Rosario La Spina sang in Pagliacci, the “tears” portion of the evening. Finally, choral beauty Four Saints in Three Acts enjoyed a sold out season at The Coopers Malthouse.

Increasingly popular company Melbourne Opera completed another successful year. Popular local soprano Lee Abrahmsen gave a knockout performance as Konstanze in The Abduction from the Seraglio. Updated with a 1970s spy romp theme, the opera floundered somewhat based on its light plot and the difficulty of incorporating madcap humour. In arguably their most ambitious project to date, Melbourne Opera crossed Collins Street to stage Tannhäuser (below) in the vastly more capacious Regent Theatre. A popular and critical triumph, Tannhäuser featured wonderful singing and striking projected scenery. The company finished the year with the second stage of their Donizetti Tudor trilogy, with Elena Xanthoudakis returning again to star as Anna Bolena. The cycle will be completed next year with Roberto Devereux.

Melbourne is also blessed with the presence of Lyric Opera of Melbourne a company that seeks out operas that have fallen into obscurity despite their musical beauty and interest. The company began the year at Chapel off Chapel with Rameau’s Pygmalion, before going on to present a lively, inventive staging of Rossini’s one act opera Il Signor Bruschino (below). The company continued their quest to unearth Australian operas, presenting Malcolm Williamson melodic 1960s spy thriller Our Man in Havana upstairs at the Athenaeum.

Gertrude Opera continued their dedicated work in training young singers in their Studio Performance Program, and took opera to a wider audience with their second annual Nagambie Lakes Opera Festival.

Sydney audiences had their own boutique opera experience with Pinchgut Opera, which presented Haydn’s Armida and Handel’s Theodora at City Recital Hall this year.

Independent: The Abduction from the Seraglio (Melbourne Opera)