OSMaD takes audiences back to Broadway’s Golden Age, for a slick and glossy, yet respectfully traditional, new production of tuneful musical comedy The Pajama Game.

With a strong book by George Abbott and Richard Bissell, and a trunk full of hit songs by Richard Adler and Jerry Ross, The Pajama Game is well deserving of being given a loving polish and shine. OSMaD (Old Scotch Music and Drama Club) reunites the terrific creative team from their productions of The Music Man and The Producers to create the dynamic direction, lush music and energetic choreography needed to bring increasingly rarely staged gem roaring back to life.

The success of the production can largely be credited to director Richard Perdriau, whose exacting approach and creative vision have brought the very best in the cast, particularly in regard to the daffy, big hearted performance style required for a characterful comedy like The Pajama Game. Vocal shape and body language have a very strong period feel, and Perdriau has guided the 28-strong cast in shaping a full set of colourful, loveable characters. 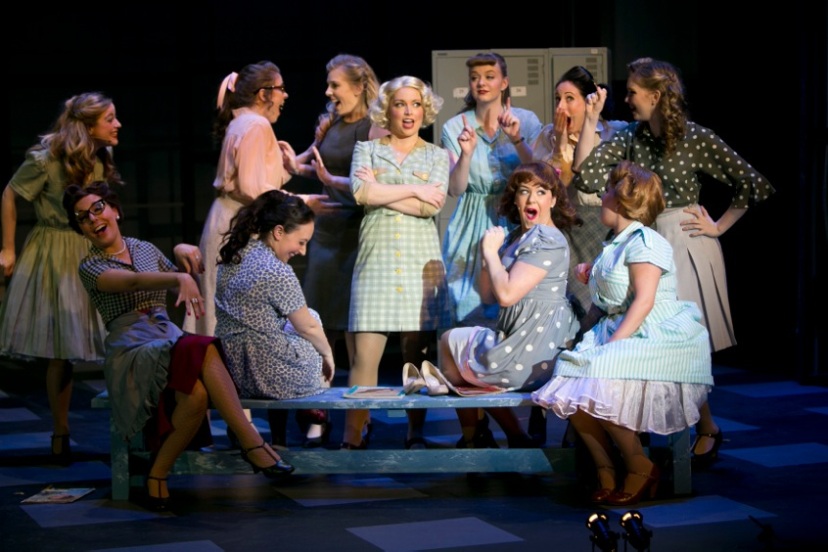 As set designer, Perdriau is also responsible for the gorgeous look of the production. The single set features an abstract industrial background that befits the primary focus of the factory setting. At home and at play, the Sleep Tite pajama factory still looms large in these characters’ lives. Scenes are created with the addition of furniture, much of it impressively authentic to the period. Perdriau also enlivens the visual picture by adding a series of projected retro-style advertisements. Featuring members of the cast as models, these advertisements are wittily crafted, and add a gentle touch of subtext to each scene.

Danny Issko’s lighting design is a key factor in the stage design, with stage legs featuring festively coloured backlit panels, and the rear cyclorama taking on various shades of rich colour. Lighting establishes various scenes as the story progresses, with spotlights used effectively to pinpoint relevant characters in the large scenes. The wash of red light for Hernando’s Hideaway captures the exciting vibe of the playfully exotic nightclub.

Musical director Ben Hudson presides over a sensational orchestra of 25 players. Playing in the capacious pit of the Geoffrey McComas Theatre, the orchestra provides a lavish quality that is rarely heard in commercial music theatre, bringing out the full colour and sparkle of Adler and Ross’ melodious music. Hudson also delivers tight harmonies and crisp diction from the company.

Choreographer Louisa Mitchell has clearly worked closely with director Perdriau in staging dance breaks that flow organically from scene and character. Sophisticated opening number “Racing With The Clock” gives every player a purposeful job and position in the factory. Ebullient act one showstopper “Once A Year Day” conveys the pent up zest of the factory workers as they enjoy their annual picnic. “Steam Heat” is staged with a nod to the original Fosse style but with its own original choreography that blossoms from the trio into a full company extravaganza.

Chloe Thomas’s wonderful costume design is as attractive as it is accurate. Enhanced with well-styled wigs, female characters sport 1950s dresses at work and cavort in capri pants at play. The stiff styles of menswear are enlivened with colourful fabrics and sharp patterns.

Nathan Wright is very well cast as new factory superintendent Sid Sorokin, bringing a distinctly masculine strength to the role. Wright has an authentic baritone that is a pleasure to hear in songs such as “Hey There.”

Wright and McKenzie enjoy strong chemistry, which really soars in spirited duet “There Once Was A Man.”

Triple threat Kristy Griffin is a daffy delight as zany secretary Gladys, all the funnier for her well-judged restraint as the comedy broadens. Griffin’s squeaky tone is a hoot and her dancing is first rate. Griffin is well supported by Jason Mill and Jacob Sellenger in iconic dance number “Steam Heat.”

Jeremy Russo throws himself into the role of nervy knife thrower Hines, landing plenty of laughs whilst also keeping the character real. Russo has the difficult task of engaging the audience when he appears on stage alone at the top of the show; his success in this sequence sets a high standard for the show that follows.

Nathan Slevin brings an infectious energy to wacky factory worker Prez, staying immersed in the character through all his singing and dancing. The running joke of Prez’s squeal as new squeeze Mae (Emma Harris) tweaks his nipples is quite hilarious.

The company is full of strong performers, all singing and dancing with terrific precision an flair, and maximising the impact of their cameo roles. Special mention to Jay Miller for his focus and flair in the role of uptight salesman Max, and to Nicole Kapiniaris for providing an exotic vibe while avoiding stereotypes as Spanish factory worker Carmen.

Lovers of good old-fashioned Broadway musicals will be sure to enjoy this lovingly staged production of The Pajama Game.