The highly anticipated return of Opera Australia’s world class Ring Cycle begins with a nuanced exploration of the psychological intensity of Das Rheingold.

Minus a couple of rows for the expanded orchestra pit, the mighty State Theatre proves a capacious home for the musicians, singers, actors, dancers, scenic elements and, of course, the throngs of enthusiastic, dedicated, knowledgeable operagoers.

Utilising every aspect of its resources, Opera Australia has clearly approached Wagner’s unassailable masterpiece with a focus on innovation, spectacle and sheer quality. 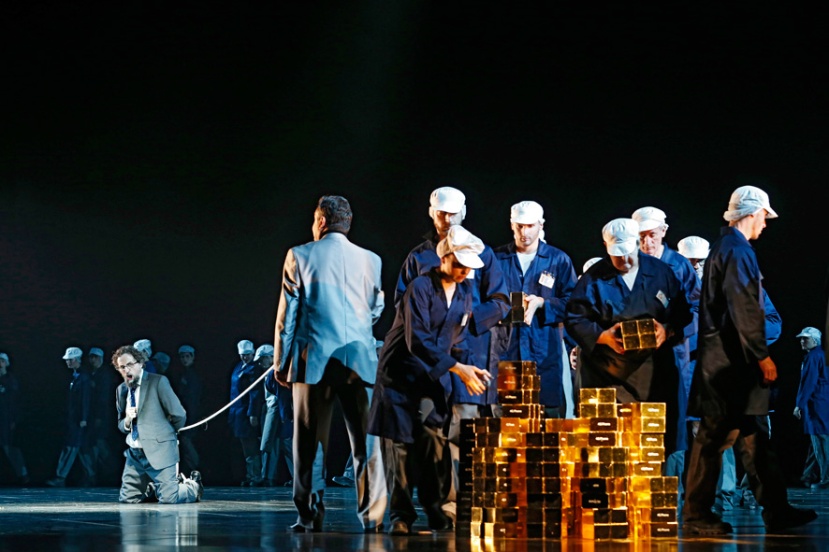 Taking for granted, for the moment, that the music and performers are first rate, the aspects that set a Ring Cycle apart are the direction and production. Contributing to the ongoing discussion of the relevance and prescience of Wagner’s epic narrative, this unique Cycle is not only original in concept but also possesses a distinctively Australian character.

Director Neil Armfield places Wagner’s mythical characters squarely in our own modern world. As the opening notes rumble and grow, an image slowly comes into focus; the stage is strewn with bikini and board short-clad Bondi bodies, which come alive to embody the water of the river Rhine. Dwarves are odious fringe dwellers, giants are puff-chested bullies, gods are the ostentatious upper class and Rhine maidens are glamorous showgirls. The power of the Tarnhelm helmet is signified as an actual magic show, gilt iPhone boxes represent gold bullion and, in a final flurry of splendour, the rainbow bridge to Valhalla is signposted by a bevy of showgirls bearing luscious clamshell feathers.

Pacing out the visual elements across the four operas, set designer Robert Cousins stages much of Das Rheingold against a pure black background. Armfield’s detailed exploration of the text comes to the fore in such scenes, blessed, as he is, with performers who can act as well as they can sing.

Referencing damage to our natural world, and hinting at the design elements in the new home being built for the Gods, taxidermied animals in glass cages are seen at the current dwelling of Wotan’s family.

Alice Babidge’s costume designs add flashes of bright colour to the black landscape. Gods Wotan and Fricka appear to be straight from a 1980s night-time soap opera, Freia’s mini-dress is as golden as the bullion she is traded for, frolicking Rhine maidens sport stunning pale turquoise outfits and men’s suits befit their position in the line of power. 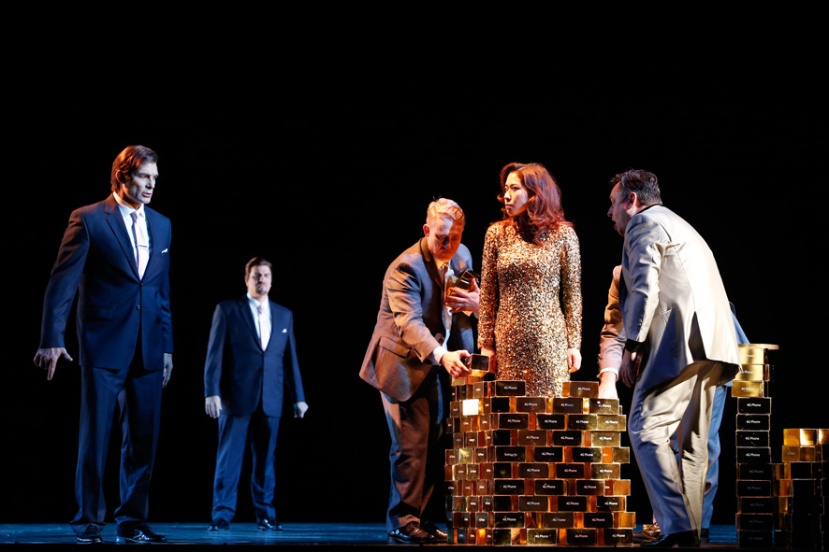 Maestro Pietari Inkinen presides over a massive orchestra of players sourced not only from Orchestra Victoria and the Australian Opera and Ballet Orchestra, but also from ten other national and international orchestras. The effect of the glorious music emanating from the voluminous put from so many players is difficult to describe. Most striking is the sense that various strains of music are originating from distinct sections of the pit; this effect is usual enough in opera orchestras, but is significantly magnified on this scale. With a profound knowledge of the music, and gentle air of assured of confidence, Inkinen capably caters to musicians and singers alike.

A hallmark of the Melbourne Ring Cycle is the dominant number of Australian artists in the principal roles. Only two of the 14 lead characters in Das Rheingold are sung by international artists.

American bass baritone James Johnson maintains a statuesque presence while bringing out a sense of weariness and impending defeat in Wotan. In a nice piece of direction of Armfield has Wotan put down his spear before insisting Alberich give him the ring, leaving him vulnerable to Alberich’s curse. Johnson vocal characterisation of the role is less commanding than often heard, symbolising the character’s power instead by the mellifluous beauty of his voice.

Following an acclaimed breakout performance in the 2013 season, Australian baritone Warwick Fyfe returns to the role of Alberich. In the intervening three years, Fyfe has lost weight but still portrays the low self-confidence of opportunistic devil Alberich and his voice is as rich and powerful as ever. A clear crowd favourite on opening night, Fyfe cements his position as one of our foremost singing actors. 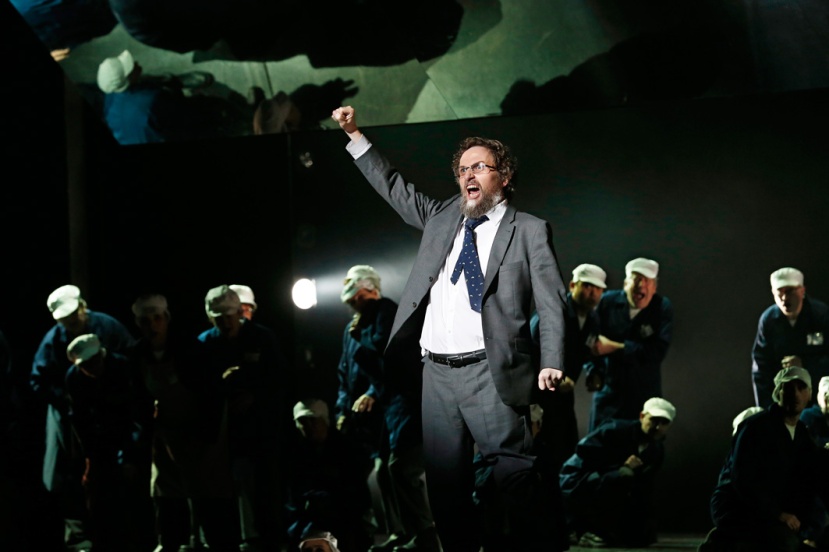 The scorching combination of Johnson, Conrad and Fyfe is at the heart of the success of this staging of Das Rheingold.

Such is the presence, charisma and vocal quality of Lorina Gore (Woglinde), Jane Ede (Wellgunde) and Dominica Matthews (Flosshilde), each of the singers playing the three gorgeous Rhine maidens can be distinctly made out.

Giving a hint of further glory to come as the cycle unfolds, Jacqueline Dark conveys the regal, yet understandably insecure, presence of Fricka, wife of Wotan. Graeme Macfarlane all too briefly displays the grasping, self-serving nature of Mime, enslaved brother of Alberich.

Bass baritone Daniel Sumegi (Fasolt) and bass Jud Arthur (Fafner), bring the perfect sense of fun to the self-made subtle gangster stylings of the pair of giants. Seen here as giants of property development, the pair enter on cherry pickers, their disdain for the environment seen in their cavalier destruction of the beautiful mountainside backdrop. Both Sumegi and Arthur sing with focused intensity and unwavering tone, conveying the commandeering greed of the pair as an inevitably tragic fatal flaw.

Stunning soprano Hyeseoung Kwon is seen but, unfortunately, largely unheard as Freia, abducted sister of Fricka. Late in the opera, highly experienced mezzo soprano Liane Keegan makes an affecting impact as primeval earth goddess, Erda. Vulnerably attired in a filmy, nude-coloured dress, Keegan moves slowly and deliberately to convey the stature and wisdom of Erda, delivering rich expression in her voice as she convinces Wotan of the danger of the ring.

Strong support comes from Michael Honeyman (Donner) and James Egglestone (Froh). Honeyman sings out in the most heroic of tones when Donner calls forth the bridge to Valhalla.