In an electric performance of Götterdämmerung, the mighty Melbourne Ring Cycle concludes as it began, with glorious singing, meticulous direction and innovative staging. 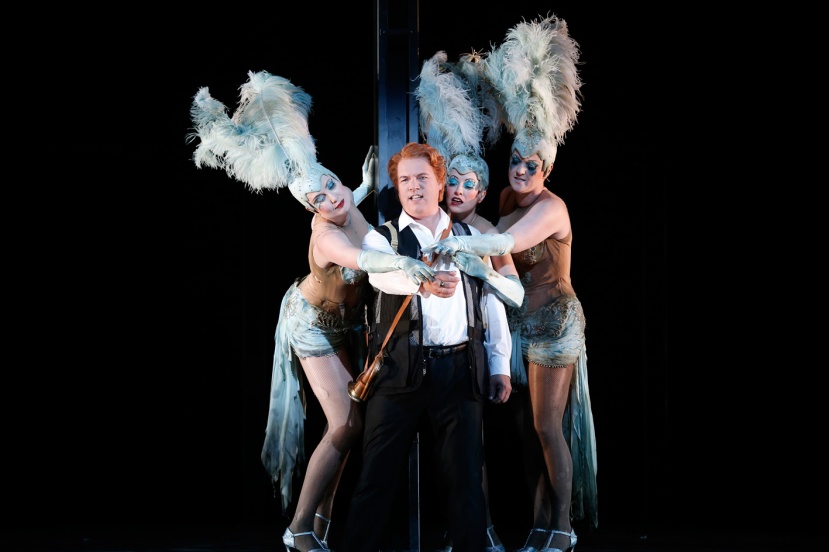 His concept and characters now so clearly established, it now remains for Director Neil Armfield to do little more than stand back and let the drama unfold. And yet he still has more spellbinding magic in store.

Continuing the combined themes of the theatrical and the everyday, Götterdämmerung begins with three Norns, seen here as seamstresses who are repairing the pastoral painted canvas backdrop that the giants tore in Das Rheingold. Tania Ferris, Jacqueline Dark and Anna-Louise Cole begin the evening’s musical splendour with gentle, sweet singing as the Norns gossip away their workday. Projecting a golden warmth, Dark is unrecognisable from her earlier work as firebrand Fricka. Emerging soprano Cole portends a promising future, delivering luscious golden tones. 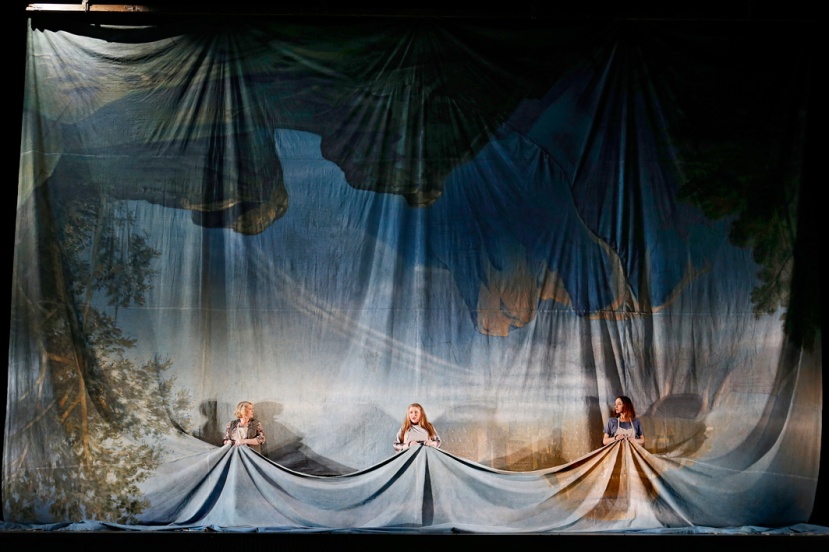 Set designer Robert Cousins again conceives of a scenic instalment that can be in place for the whole opera, flexibly portraying a range of locations. A large steel construct forms the frame of a building, first representing the cliff top outdoor bedroom Siegfried shares with Brünnhilde, then the interior of the Hall of the Gibichungs. For act two’s double wedding reception, a white canvas with arched plastic windows turns the structure into a capacious backyard marquee. Finally, the space is a hunter’s shooting range, before ultimately, and spectacularly, catching alight as Siegfried’s funeral pyre spreads flickering flames to the Hall of the Gibichungs. 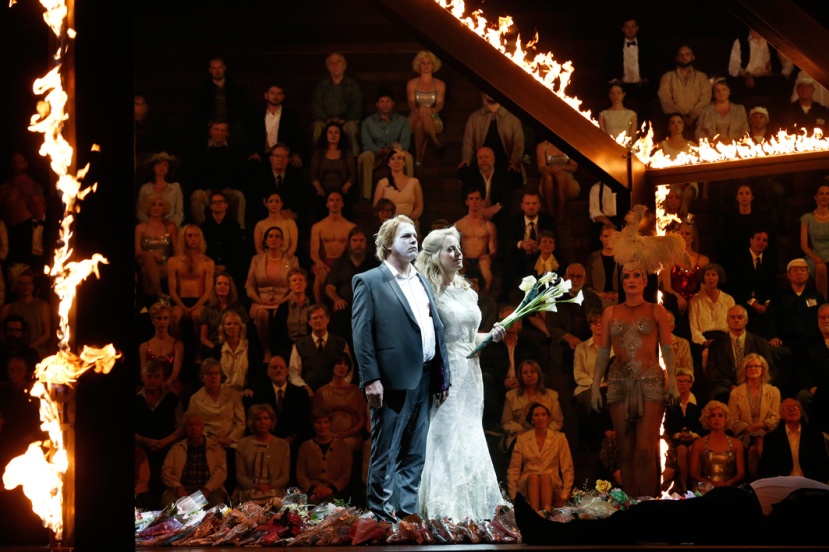 Costume designer Alice Babidge has fun with splashes of vivid colour for the Gibichungs, portrayed here as a rather gauche nouveau riche collection of military men and trophy wives. Oversized artworks share the living space with exercise machines and a bar. Siblings Gunther and Gutrune begin in matching white gym outfits before Gutrune changes into a garish neon orange frock and matching heels. She is clearly the sort of woman who would marry in a mermaid wedding dress with four breathless bridesmaids in candy pink minis. 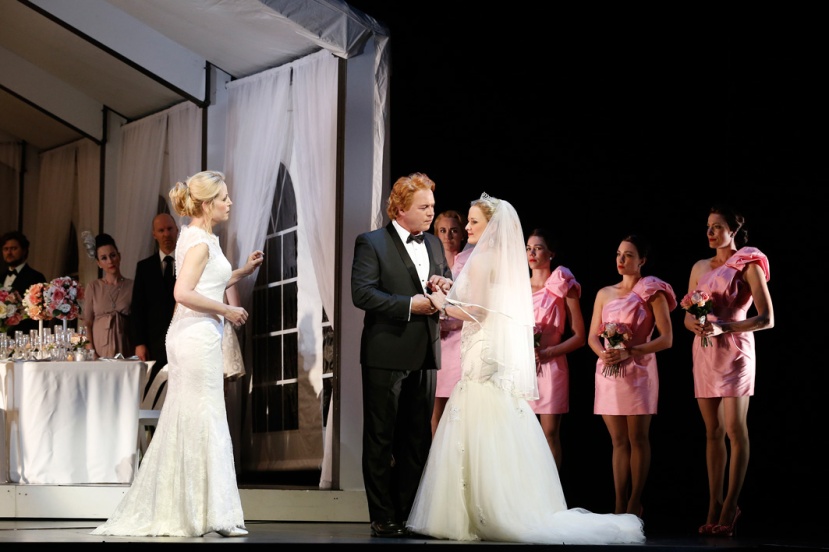 Well into the Cycle, Wagner raises the vocal energy with a chorus. The male chorus, featuring any number of recognisable local singers, gathers in black tie and military uniforms in support of Hagen, lord of the Gibichungs. The women sport pale pastel summer dresses, tastefully matching the reception table settings and marquee decor. Prepared by chorus master Anthony Hunt, chorus singing is magnificent.

Having worked with grand flair throughout the Cycle, lighting designer Damien Cooper delivers further grandeur in Götterdämmerung. Always an integral part of Armfield’s superb transition/interlude scenes, Cooper’s standouts this time include act one’s slow transition back to Brunnhilde’s rock, in which Hagen vanishes up stage, and the slow revolve after the reception showdown, in which a light remains on Hagen while all the chorus members silently disappear.

Armfield provides a couple of welcome moments of levity. The “wine” shared by the men at the hunting range is represented by slabs of UDL cans transported in an abandoned supermarket shopping trolley. At the top of third act, at the end of a long evening and a long Cycle, the three Rhinemaidens are seen in wig caps and runny makeup, with holes in their stockings, their exhaustion perhaps mirroring the spirits of many who have made it this far (much as all present on stage and off have adored every minute.) 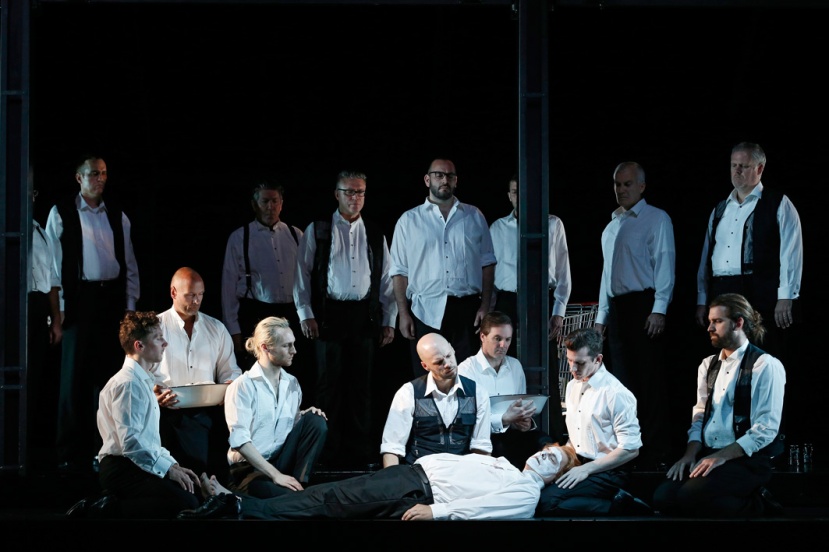 Appreciation and acclaim for maestro Pietari Inkinen has increased throughout the season as he has proved himself inordinately capable of calmly delivering every possible aspect of Wagner’s epic score. As mentioned in the Das Rheingold review, the extraordinary effect of music rising, geyser-like, from various corners of the pit can really only be fully experienced live. The full orchestra makes a welcome appearance on stage for the curtain calls to celebrate their aceievemenst across the Cycle.

Warwick Fyfe, as Alberich, has a wonderful cameo in which he visits his sleeping son Hagen as if in a dream, whispering insidious notions into the sleep of his vainglorious son. With an unflinching baritone, Fyfe has again proved a hero of this Cycle, and his exacting work has been a joy to experience.

Sian Pendry, one of the strongest and most invaluable actresses in the Opera Australia firmament, appears as Waltraute, who visits her sister Brünnhilde for a melancholic reflection on the price of Wotan’s grief. Pendry grounds the scene emotionally, conveys multiple layers of feeling in her highly expressive mezzo-soprano voice. 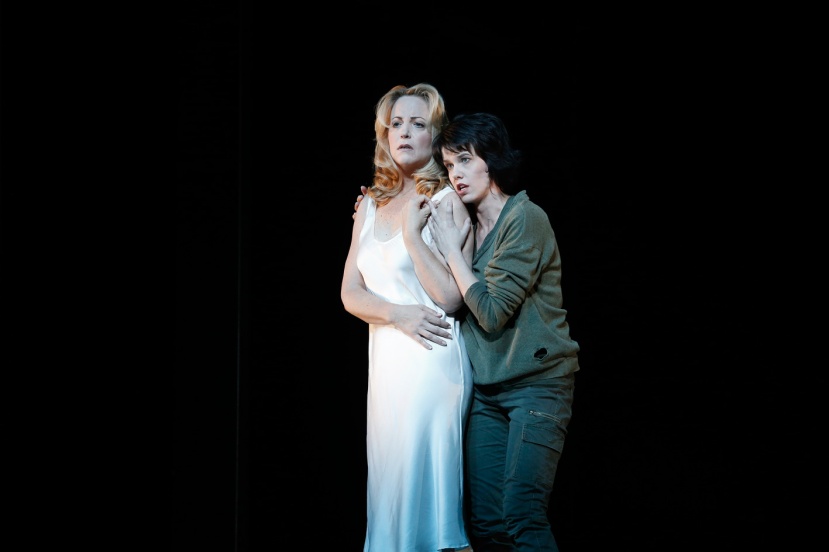 Strapping men Daniel Sumegi and Luke Gabbedy fill out Officer’s uniforms with confidence. Sumegi uses the constant subtle rumble of his bass voice to add tangible menace to Hagen’s every interaction. Gabbedy’s characterisation of Gunther shows the insecurity behind a strong man who has an abundance of material possessions but not love. 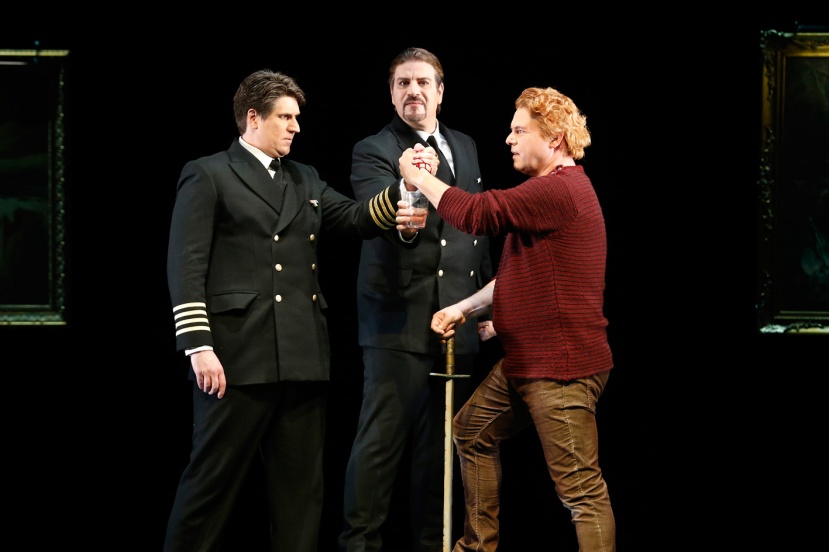 Highly experienced soprano Taryn Fiebig moves up to the role of Gutrune, bringing believable wide-eyed naivety to spoiled woman who quickly becomes a spurned bride. Although not a Wagnerian soprano, Fiebig’s golden vocals are lovely, and float fluidly above the orchestra.

A Ring Cycle is an international event, and the evening ultimately belongs to visiting artists Lise Lindstrom and Stefan Vinke.

An untiring singer of incredible fortitude, Vinke continues his lively portrayal of Siegfried, singing with seemingly effortless precision and steely beauty. Two acting moments standout as exemplars of Vinke’s talent: Siegfried’s Tarnhelm-assisted portrayal of Gunther, and Siegfried’s change of personality under the effect of Hagen’s memory potion. Vinke’s world class performance has been an unforgettable aspect of the 2016 Melbourne Ring Cycle.

Likewise, Lindstrom has had an incredible impact in the revered role of Brünnhilde. Enhancing the power of her soprano with gorgeous blooms of colour, Lindstrom would be sensational based on vocal performance alone. In combination with the intensity and focus of her acting, the result is nothing short of extraordinary. Amongst many sterling moments, Lindstrom’s final slow walk as the defeated warrior prepares to join her great love on his funeral pyre is extremely moving. Lindstrom’s appearance has been a great blessing for Melbourne opera lovers, the icing on an already delicious cake. 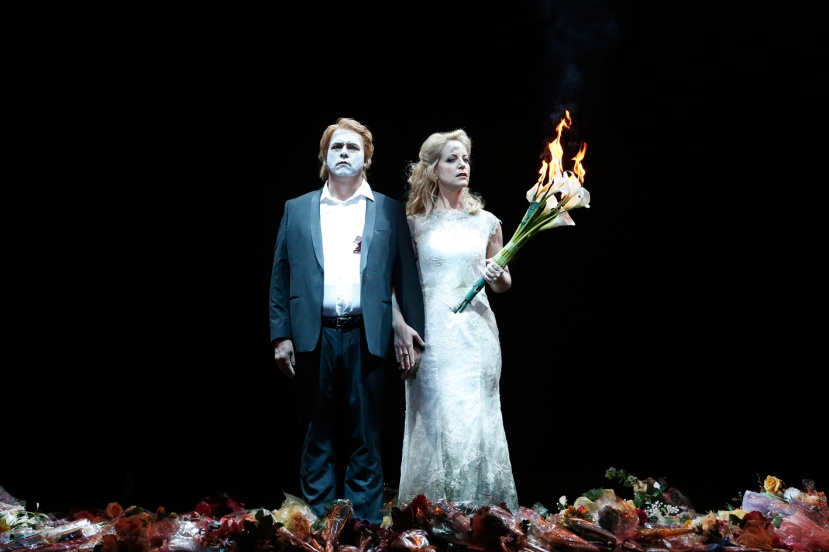 The Melbourne Ring Cycle was initially slated to play three times, with a three year gap between each appearance. See you at the State Theatre in 2019.