Original Australian musical Ladies in Black retains its down to earth charm in this welcome national tour. 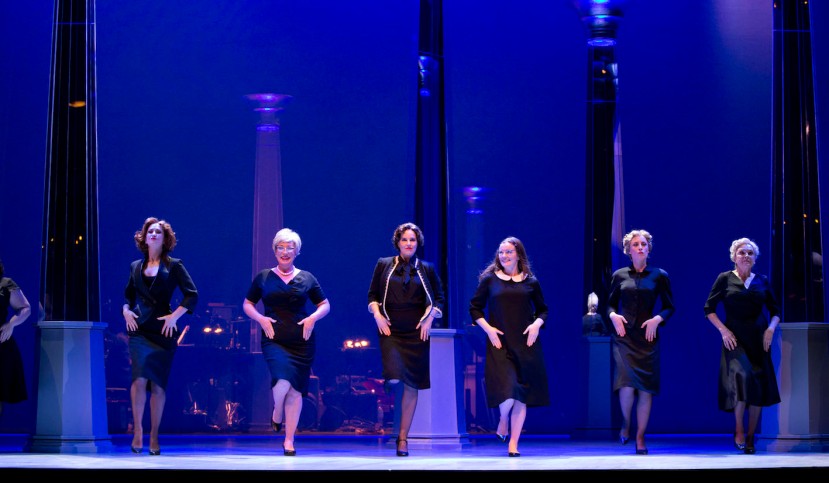 Sold out in Brisbane and Melbourne just over a year ago, Ladies in Black has moved from the subsidised realm to a fully-fledged tour. Around half of the cast members are new, and although this potentially seemed to be a drawback, the talent and flair of the new cast members shine through as they make the roles their own.

A personal and intimate story of a slice late 1950s Australian life, it is disappointing to note that the scale of the show is overwhelmed by the vast Regent Theatre auditorium. Two extra rows are added at the front, and the rear of the dress circle is not used, but the decision not to expand the cast and not to enlarge Gabriella Tylesova’s original designs to any noticeable extent is undermines the experience of watching the show. Alternatively, a more modest-sized theatre would have allowed the show to land with far more impact.

Carolyn Burns has written a zesty adaptation of Madeleine St John’s novel The Women in Black, capturing the pleasures of a bygone era while also deftly underlining the current relevance of the treatment of immigrants. One sequence that remains a missed opportunity is Magda’s description of her New Year’s Eve bash in her sung monologue “The Party.” While this choice means the delivery is in keeping with the same moment in the novel, it robs the audience of the chance to witness key romantic developments, breaking the theatrical rule “show, don’t tell.”

The go-to director for new Australian musicals, Simon Phillips keeps the action gliding along (on multiple revolves), earning each of the main characters a place in the audience’s hearts and gently conducting the beats of the uplifting subplots. 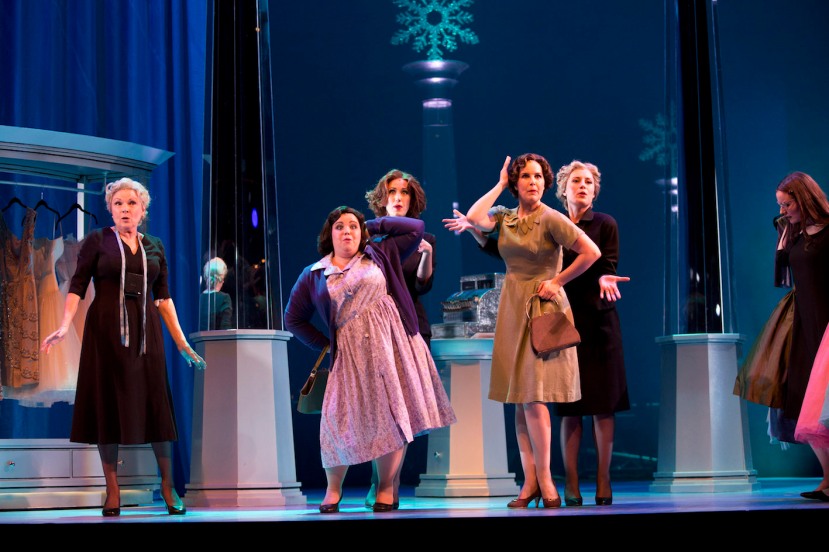 Legendary music talent Tim Finn has composed an enjoyably hummable score on his very first effort, which is no small feat. Highlights include the musicalisation of the busy women’s department store sales floor in “Sales Talk” and ”Pandemonium,” and the truly delightful charm songs “Bastard Song” and “I Just Kissed a Continental.” Some of the rhymes in Finn’s lyrics may be a little obvious, but this reflects the straightforward language of the characters. The most impressive aspect of the score may be the way that each of the songs sits in the natural vocal register of the performers, bringing the singing very close to natural vocal delivery.

David Walters’ lighting design looks quite glorious in this staging, filling the background with luscious colour and often making clever use of silhouettes.

Sarah Morrison returns to her debut leading role, taking Lesley Lisa on a gentle arc of self-discovery and increasing worldliness. As well as being a very lovely singer, a feature of Morrison’s work is the way she completely stays in character even while singing and moving in company numbers.

Carita Farrer Spencer retains the kindheartedness of Lisa’s mother Mrs Miles, balancing the character’s willing subservience with her gradual acceptance of change. Kate Cole has continued to find all sorts of levels and nuances to make exacting manager Miss Cartwright all the more entertaining.

Fellow newcomers Trisha Noble and Natalie Gamsu bring a wealth of experience to their significant supporting roles. Noble’s pair of roles look, act and sound nothing alike; Mrs Crown is a sturdy suburban housewife and mother, while dear Miss Jacobs is a fragile woman with a melancholy secret. Gamsu brings palpable warmth to the exotic “continental” Magda, commanding the stage whenever she appears.

Music theatre fans with a penchant for late-1950s nostalgia are sure to enjoy Ladies in Black. Given the onslaught of overseas musicals that constantly fill local stages, music theatre lovers should embrace the opportunity to support a new work produced at such a high level.

Ladies in Black plays at Regent Theatre, Melbourne until 18 March 2017 before continuing its tour to Canberra.