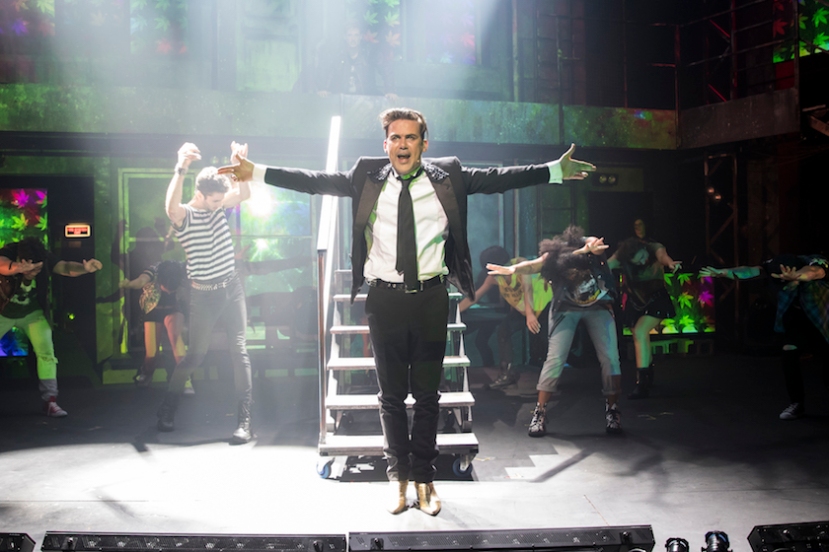 Green Day themed their iconic 2004 album on the soul scarring effect of George W. Bush and the fallout of growing up under the spectre of the tragedy of 9/11. There is a new American Idiot in the White House now, and this ever-evolving production wastes no time in projecting his image and lampooning his ludicrous hair.

The 2010 Broadway staging of Green Day’s American Idiot was nominated for Best Musical, going on to win two Tony Awards. Director Michael Mayer shaped the show for the stage, working with Green Day, particularly lyricist Billie Joe Armstrong, to add snippets of dialogue to flesh out the story. 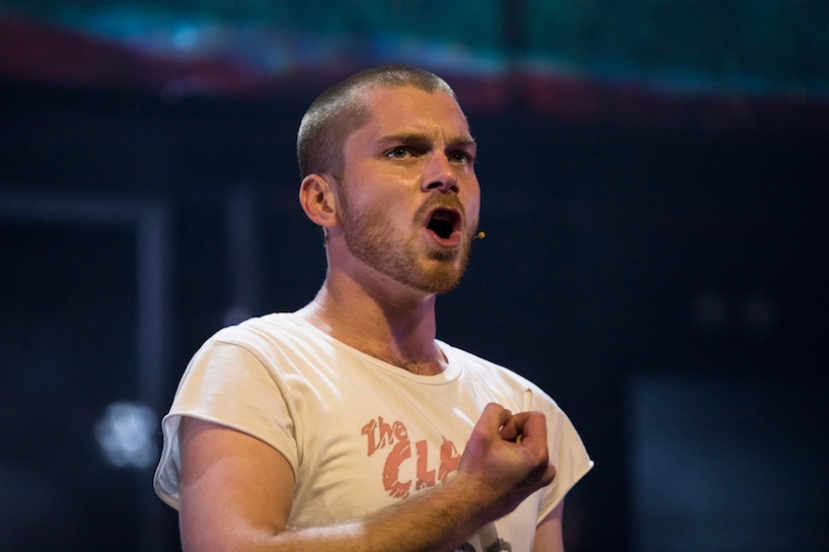 In presenting the Australian premiere, producers shake & stir theatre could have just as easily followed other unimaginative Australian producers and done a tried and true revival. (Rent could have been staged with basically the same cast, musicians and set.) The producers’ second bold move was to stage a brand new staging of American Idiot, rather than import a franchised production. Full credit to shake and stir theatre for having the courage to follow their artistic vision.

Director Craig Ilott keeps energy sky high, while always deftly drawing the eye to key action. The broad storytelling is snappy and clear, with bitter life lessons hurtling along as we zoom through some three-dozen songs (some of which are taken from American Idiot follow up, 21st Century Breakdown). 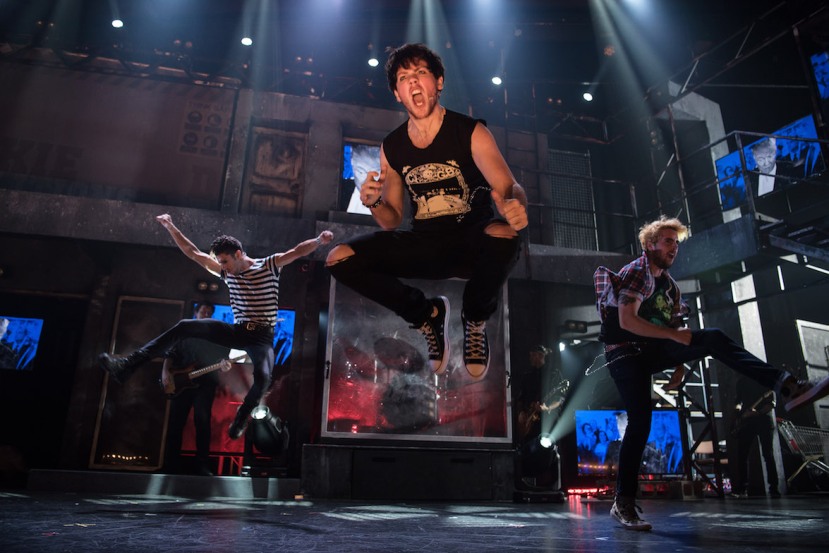 Collaborating with designers Matthew Marshall (lighting) and Craig Wilkinson (video), Illot creates a music video effect, distinguishing the songs from each other with varied use of playback, projections and lighting. Highlights include the soaring angel in “Extraordinary Girl,” and iOTA’s guest video appearance in “Favorite Son.”

Choreographer Lucas Newland contributes variation in dance to these changes in tone for each song, also contributing to the high wattage emanating from the stage. Although it is clearly very well rehearsed, Newland’s choreography has a fresh, spontaneous feel. 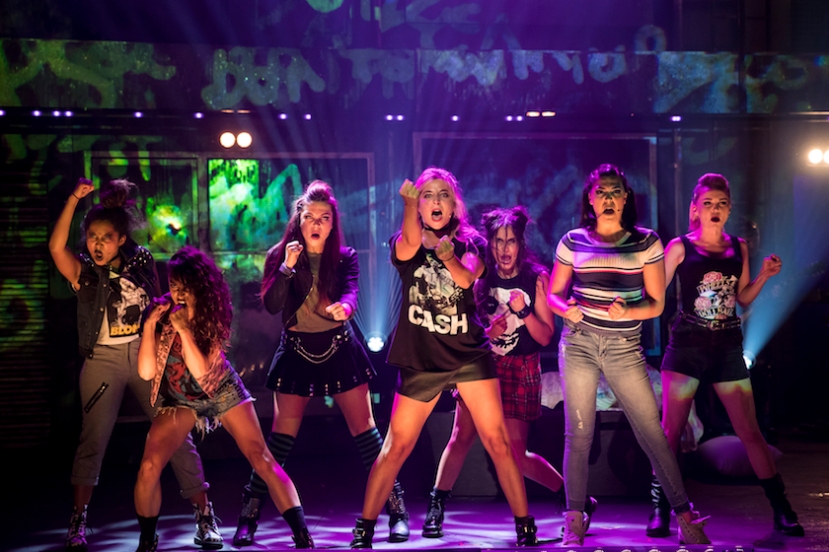 Playing guitar, music director Glenn Moorhouse joins the half-dozen musicians on side stage to provide blazing accompaniment. Regular readers of Man in Chair may have accurately surmised that I am not necessarily a listener of this particular music. Nonetheless, there are a handful of very well known hits, and the music overall has an infectious vibe that makes it easily accessible.

Working as a tight, interwoven ensemble, the cast members are terrifically talented and have been selected with a pleasing degree of diversity. 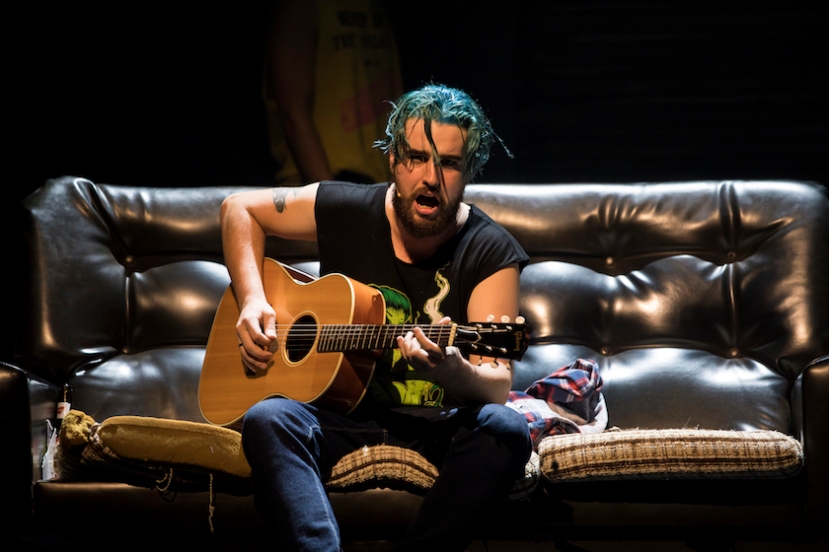 Phoebe Panaretos has a genuinely alluring presence as Whatsername, the mysterious girl Johnny falls for in the city. Panaretos crosses over to rock with ease; hearing more of her voice would have been very welcome.

Magnetic ensemble member Christopher Scalzo makes his performance so vibrant that all he needs is a character name to be considered one of the lead roles. Fellow ensemble member Maxwell Simon may not take centre stage this time, but remains a dynamic leading man in the making.

Fans of the original album are the key audience for Green Day’s American Idiot, and they are sure to love the imagination and energy that has gone into the show. Traditional musical theatre fans may struggle, but a background in watching shows like Rent and Spring Awakening will be sufficient preparation for an enjoyable 90 minutes in the theatre.

Green Day’s American Idiot plays at Comedy Theatre, Melbourne until 11 March 2018, before continuing its tour to Brisbane and Darwin.