Mark Doran gives a thrilling, world-class performance in the title roles as CLOC Musical Theatre successfully trades the melodramatic for the macabre in this revival of their 2005 production of Jekyll and Hyde.

The success of this revival lies in the creative vision of director Shaun Kingma, who brought similar excitement to CLOC’s Jesus Christ Superstar. Working with a less well-written show this time, Kingma has his work cut out, and yet manages to briskly sweep over the corny melodramatic aspects of Leslie Bricusse’s book and lyrics to craft an exciting staging with moments of true horror.

Widely known from the sensational 1994 concept album starring Anthony Warlow, Frank Wildhorn’s score for Jekyll and Hydeis jam-packed with more Great Big Power Ballads, the chart-topper of them all being “This is the Moment.”  Musical director Tyson Legg leads 14 musicians in a tight performance of the almost sung-through score, with chorus harmonies at a pristine standard. With the orchestra pit completely covered, synchronicity remains rock solid.

Sound designer Marcello Lo Ricco creates an immersive sound platform for the audience, although with orchestral levels quite high in the mix, vocal subtlety is often lost as singers have to give every note their all to compete. The impact of quartet “His Work and Nothing More” and choice duet “In His Eyes” is particularly affected by this aspect, which may very well be corrected as the season progresses.

Kingma makes his mark on the show immediately apparent, with the opening moments featuring a soundscape of white noise as projected images of Victorian people precede a brief appearance of the lead characters. A structured scrim replaces the show curtain, with similarly elegant panels side stage signifying a modern production of a period show.

Supporting the shadows, and occasional well-judged projections, front lighting is minimal, with lighting designer Brad Alcock adventurously supporting side lighting with mobile lights wheeled about by crew. This conceit works surprisingly well, and pays off with the effect of the deadly train. Beautiful hanging lights complement the design of Jekyll’s laboratory, and hand-held torches are used by the cast to ghoulish effect.

Kingma’s most thrilling sequences involve close collaboration with Alcock. The visual shocks are practically at a cinematic level, such as the genuinely scary sequence when Hyde pursues prostitute Lucy through the streets of London.

If there is one cost to Kingma’s swift and exciting direction, it is that the show’s central theme of duality is basically ironed out by having all of society look like they are off to Victoriana Halloween. Costume designer Victorian Horne outfits every member of the company in decadent, individual black costumes, set off by elaborate wigs from David Wisken. The look is grand, but the contrast between high society board members and streetwise Londoners in and around The Red Rat is completely lost. Even the contrast between leading ladies Lucy and Emma is basically erased, leaving the already underwritten Emma with even less of a character to play.

In a vivid scarlet wig that is one of few carefully chosen splashes of red on the stage, Rachel Rai provides the heart of the show, gaining audience affection and sympathy for downtrodden prostitute Lucy. Rai delivers powerhouse vocals, particularly on Lucy’s swansong “A New Life.” 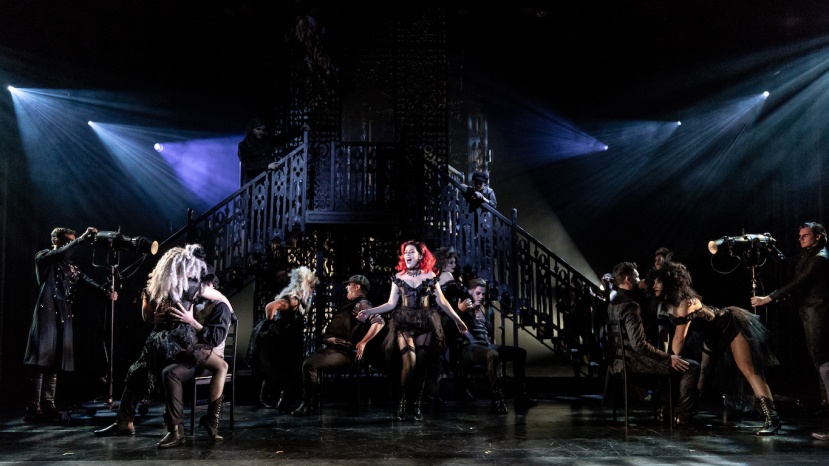 Catherine Hancock adds further strong singing as Emma, a highlight being her early duet “Take Me As I am” opposite Doran, as Emma’s fiancé Dr Jekyll. While Emma’s costume, hair and make-up create a look too powerful to project any of the necessary vulnerability to engage audience affection, Hancock’s performance is nonetheless one to be enjoyed on its own merits.

Each member of the ensemble gives a committed, highly focused performance, leading to a very cohesive whole. Standouts include Stephanie Powell’s saucy Nellie, attendant of The Red Rat, Amara Jensen as knowing housekeeper Poole and Ben Jason-Easton as a Gavroche-like Boy.

Finally, back to Mark Doran. If I have ever been lucky enough to see a better performance in community theatre I cannot recollect it now; in fact, Doran is better here than most leading men seen across Australia, Broadway and London’s West End. Inhabiting the role with every fibre of his being, Doran completely contrasts the pair of good and evil men in face, body and voice. His duet with himself in “The Confrontation” is jaw-dropping in its execution, with Doran flipping seemingly effortlessly mid vocal line between each highly distinctive voice. With lungs of iron, the quality of Doran’s rich, warmly burnished tenor is heard to electric effect, with climatic high notes for days. 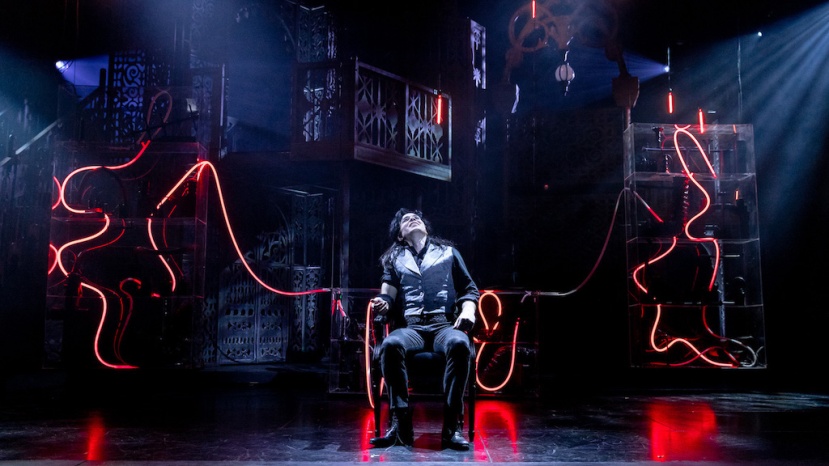 Jekyll and Hyde plays at National Theatre, Melbourne until 27 October 2018.