Just when the boutique musical trend seems to be dying, full credit to solo independent producer James Terry for presenting this season of Rent, which was all but sold out before it even opened. Faithful ticket buyers will certainly not be disappointed by this production, in which a terrific young cast truly inhabit their roles and Jonathan Larson’s cherished score sounds as fresh and exciting as ever.

Rent opens mere days after a high profile Melbourne season of source material La Bohème, proving the enduring popularity of both incarnations. The impact of Larson’s version is all the stronger knowing that he lived in the community he portrayed on stage, in which money woes and romantic entanglements were dwarfed by the deadly threat of AIDS. The young cast of this production highlights the vulnerability of these characters, struggling in a dangerous city while their addled parents hover helplessly from afar.

Director Mark Taylor has clearly mined the text for meaning, ensuring that not a word is lost or wasted. Having seen Rentmultiple times, three particular moments stand out from Taylor’s insightful direction (spoiler alert: skip to next paragraph if you are yet to see this production of Rent). Taylor has Mimi inject herself with drugs during “Out Tonight,” the action coming right before the bridge of the song, where the tone clearly mellows. Towards the end of “Another Day,” Mimi arrives at the support group meeting, not just establishing that she already knows and loves Angel, but also giving musical credence to the fact that she sings the support group’s affirmation as a counter melody with Roger.  Most powerfully, when Roger changes shirt, his body is seen to be blighted by Kaposi’s sarcoma lesions, giving stronger, more affecting subtext to his inclination to avoid intimacy with Mimi.

Positioned upstage within the dual level set, musical director Katie Weston leads a tight band in a polished performance of the score. Weston often pulls tempi back ever so slightly to aid with clarity. Her skillful work is also heard in the judicious use of dynamics, with select phrases or even entire songs, such as Collins’ groovy “Santa Fe,” sung softly and gently rather than having the whole score sung at full, ear-numbing volume as is the often the case in other productions.

Marcello Lo Ricco’s sound design keeps clarity and balance at a premium without overpowering the audience with volume.

“Santa Fe” is sung in an improvised subway carriage, which is just one of Taylor’s clever uses of space in Sarah Tulloch’ immersive, flexible set design. Portable cyclone fences, ladders and a multitude of old chairs combine to create the flow of scenes with ever-dynamic interest. The level of invention slows in the second half of act two, but this allows the focus to stay squarely on the characters and story. Lighting designer Rachel Lee enhances the visual appeal with motifs made of fairy lights. 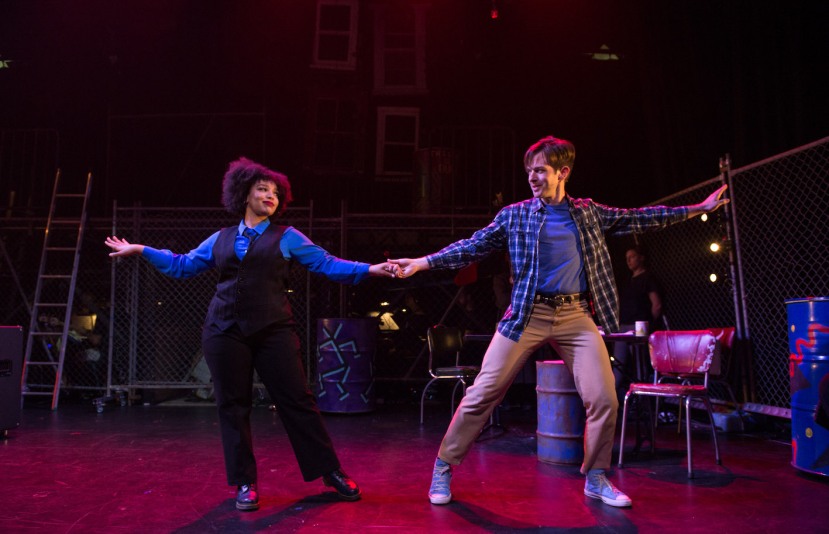 Choreographer Freya List has worked closely with Taylor to thread lively dance through the show at key moments where it supports the action. In a pure musical theatre sequence, Mark and Maureen are joined by dancing homeless people in “Tango: Maureen.” Whereas company number “Contact” is usually presented as a flickering nightclub scene, Taylor and List ramp up the drama by staging it as a fever dream of Angel, who imagines and misses life outside of his sickbed, much like Violetta in act three of La Traviata.

The quirky, characterful costume design of Kim Bishop supports Taylor’s detailed work with cast and strongly supports the storytelling. While the activist slogan t-shirts may be somewhat overused, this is clearly a deliberate choice and it demonstrates the widespread support for the cause. Angel’s Christmas tree ensemble is spectacular, as is her Pussy Galore outfit. Maureen’s hand-painted black unitard is perfection as is her Wonder Woman costume. Collins’ look as a shaggy professor is well realised and Joanne’s lesbionic power suits are ideal. The only misfire is the ill-fitting suits and cheap sneakers worn by Benny, who would have more self-respect and taste as an ostentatious yuppie. The ensemble members are well served in a multitude of distinctive costumes that allow them to play a range of roles with flair.

Each of the eight lead performers is well cast in their role. Vocals are uniformly strong, and a palpable sense of warmth and camaraderie has been established between the bohemian friends.

Looking every bit the reclusive ex-rock musician, Conor Morel captures the sullen moodiness of Roger, skillfully playing guitar as required by the role. Evan Lever successfully underplays Mark so as to portray the young man’s wallflower role as an observer and introspective thinker.

A multitalented young performer who is sure to go far, Samantha Bruzzese shines as Mimi, balancing the troubled young woman’s brittle shell with her tender, loving heart. 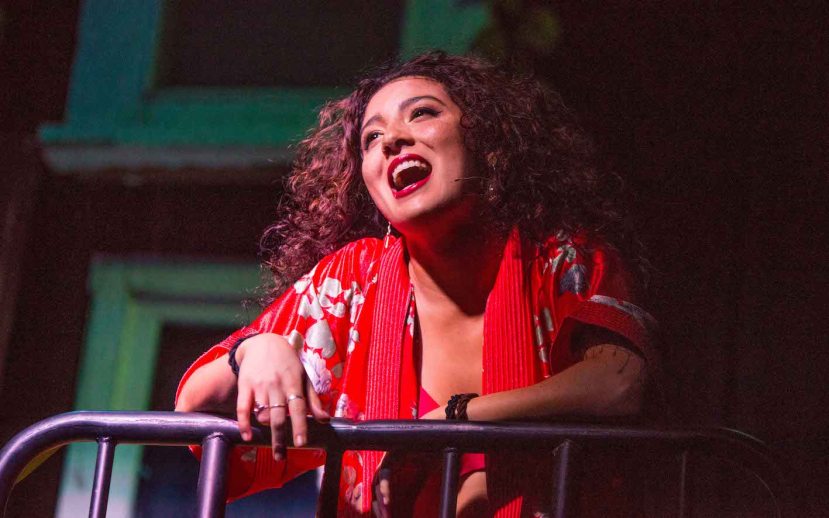 Emerging young character actor Marty Alix is an inspired choice to play Angel, possessing not just the literally angelic looks but also singing with the voice of an angel. The contrast that Alix is able to achieve between glossy diva and debilitated patient is most affecting. Angel’s gloss is neatly offset by the earthy humanity of Dave Barclay’s Collins. 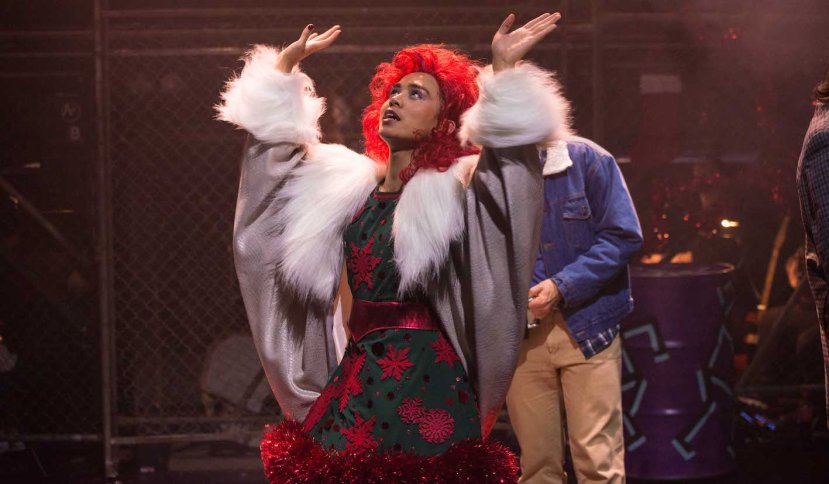 Zenya Carmellotti is in excellent voice as Joanne, creating a warm and endearing character. Kala Gare makes a terrific impact when Maureen finally arrives for her protest performance, which, in this production, is wittily conceived and very amusing. Gare carries Maureen’s drama queen tendencies over into the character’s private life, leading to crackling confrontations underscored by a loving heart.

Cameron Steens deftly sneaks in seeds of wistfulness and doubt as driven property developer Benny observes that money does not replace the love of good friends.

The collaborative nature of the show and the quality of the supporting performances mean that all members of the ensemble deserved to be named. Take a bow, Jye Cannon. Isabella Ferrer, Nathan Fernandez, Nick Murillo, Willow Sizer and Lucinda Ventimiglia.

For those lucky enough to have had the foresight to secure a ticket to Rent, enjoy the show. For those who were holding back, act now to book one of the few remaining seats.

Rentplays at Chapel off Chapel, Melbourne until 9 December 2018