Whoopee baby! Thoroughly Modern Millie returns in a splashy, starry staging that distils the very essence of musical comedy into an evening of unabashed joy.

After a brief detour from traditional fare, The Production Company is safely back on comfortable ground, and the result seems more glorious than ever. 2002 Best Musical Tony Award-winner Thoroughly Modern Millie is given the lavish, loving treatment usually reserved for revivals of Golden Age musicals, and it more than capably rewards the attention.

Based on the classic 1967 Julie Andrews vehicle, Thoroughly Modern Millie was an early entry in the now prevalent trend of screen-to-stage adaptions, riding the wave of audience affection as Broadway rediscovered musical comedy in the early 2000s. Her hair freshly bobbed, plucky heroine Millie Dillmount relishes the jazz age of 1922 New York as she tirelessly and unashamedly seeks out true love.

Director Chris Parker proves that the success of 2018’s Oklahoma! was not a one-off, again delivering confident direction that translates into highly effective use of space, crisp, characterful, comedic storytelling, and a deft balance between intimacy and the open stage. With more snap, crackle and pop than a bowl of Rice Bubbles, the show fairly roars its way along to a delightfully daffy climax, providing an abundance of entertainment along the way.

Every director of Thoroughly Modern Millie has to contend with the inherent racism of the show’s bizarre subplot in which an aging actress poses as a Chinese woman so as to find young ladies to sell into white slavery. Parker successfully makes this potentially offensive aspect more palatable in two ways. Veteran stage diva Marina Prior has the finely-honed comic chops to make it abundantly clear that it is the character of Mrs Meers herself who is devilishly racist, the former actress’ limited skills resulting in the broadly stereotyped disguise. Additionally, actors Keith Brockett and Jonathan Chan bring authenticity and dignity to the roles of ill-treated assistants Ching Ho and Bun Foo, characters who not only play a significant role in saving the day but also find their own true loves.

The liveliness of Parker’s snappy staging is boosted by the work of Australian best tap choreographer, Christopher Horsey. The concert staging gives the scenes room to breathe, a fact that Horsey seizes upon to frequently spectacular effect. Featuring clean, sharp angles and crisp tap beats, the tightly rehearsed choreography adds significantly to the sparkle of the brightly polished production.

Set designer Christina Smith frames the fluid action with a grand rear curved beaded curtain, often complemented with a matching front curtain. Aside from shimmering beautifully under Gavan Swift’s elegant lighting design, the front curtain actually allows dramatic entrance and exits, a feature usually robbed by the sheer width of the State Theatre stage. When the overhead black panel is lowered (often to carry surtitles or place names), the visual effect is reminiscent of watching a classic movie filmed in cinemascope.

Isaac Lummis delivers another sumptuous set of costumes, the quality of which belies the show’s relatively short season. The opening sequence and the act one office scene utilise the marvellous effect of having the ensemble attired in grayscale costumes while Mille sports vibrant colour. Other highlights include the decadent sparkle of Muzzy’s nightclub outfits, Miss Dorothy’s precious ruffled layers and insurance boss Trevor Graydon’s sharp pinstriped suit. Mrs Meers’ plush “Asian” outfit is cheekily ostentatious, topped by a red and black jacket that is to die for.

Wigs, by Trent Whitmore, include a real dazzler for Muzzy and a multitude of smart looks for the ensemble ladies. Meanwhile, Millie looked like she may have bobbed her hair with garden shears; the leading lady deserves better, so hopefully this will soon be remedied. 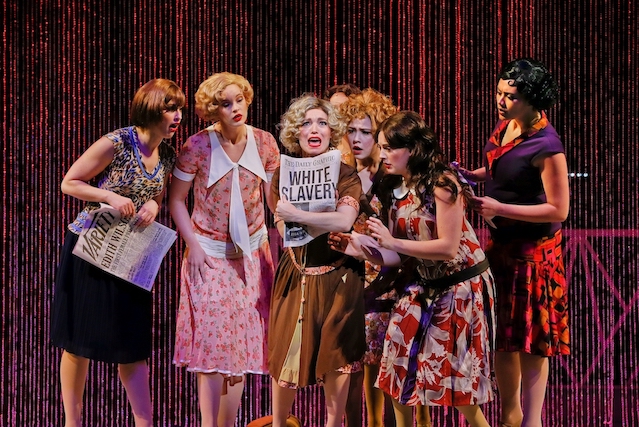 While The Production Company has shone a light on dozens of rising performers over their 20+ years, the leading roles are usually reserved for established stars. The decision to anchor a show with a relative unknown pays off brilliantly with the breakout performance of Annie Aitken, as modern a Millie as one could hope to see. Adorable Aitken is all heart, showcasing delightful comic skills, dancing up a storm and alternating between sweet soprano and hearty belt. Her powerhouse rendition of Millie’s 11 o’clock number “Gimme Gimme” absolutely brings down the house, providing the final confirmation that Aitken has truly arrived. 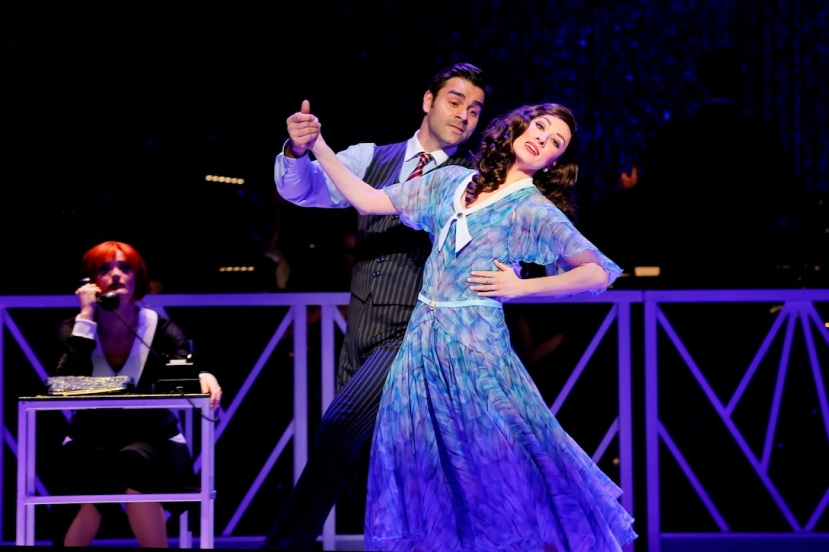 As act one draws to a close, and all of the show’s riches seem to have been unfurled, the production leaps up another notch with the appearance of Queenie van de Zandt, as nightclub chanteuse Muzzy van Horn, who delivers an absolutely electrifying rendition of “Only in New York.” Parker and Horsey wisely keep the ensemble party guests off stage until the song is done, giving van de Zandt her well-deserved place in the spotlight alone. Van de Zandt delights again with act two’s “Long As I’m Here With You,” providing a further highlight when Muzzy goes undercover to expose the white slavery ring. The frisky faceoff between grand dames Van de Zandt and Prior is truly hilarious.

Thoroughly Modern Millie has amassed admirers aplenty over the years. Fans of the show will surely thrill to this new staging, the grandest the show is likely to see in Australia.