Amongst the impressive highlights and sterling accomplishments of the evening, the work of Lithuanian soprano Vida Miknevičiūtė will be seared into the memories of all who are fortunate enough to witness her performance as Salome.

At the heart of the success of this season of Salome is maestro Richard Mills’ tremendous work with a massive contingent of Orchestra Victoria. Overflowing at the sides despite the Palais Theatre’s wide, capacious pit, the musicians bring every nuance of Strauss’ supremely expressive score shimmering to life. The relatively shallow pit deservedly showcases Mills and the musicians as a key attraction of the performance.

Director Cameron Menzies sets the biblical drama in a dark dystopian world in a non-specific era. A feature of Menzies’ direction is the extent of physicalisation of the cast, with tension, subservience, lust and more all clearly conveyed in sharp body language. Storytelling is clear and stakes are high for all characters.

In a bold move, set designer Christina Smith has incorporated the grand old Palais Theatre itself into the design, replicating the front auditorium and stage but in a horribly decayed state (the settings should definitely be stored away for a future production of Sondheim’s Follies).

Gavan Swift successfully amplifies the eeriness of the setting, with misty shafts of light streaming in through cracks and shattered windows. Clever use is made of shadowed images to portray the entrance and exit of Jochanaan from his underground cell.

Anna Cordingley’s striking costumes take a hint of inspiration from movie series The Hunger Games, with decadence darkened by disrepair. Program notes reveal Menzies’ intention for the painted faces of the rulers to be a deception to the people; in the absence of a Chorus, this contrast is not clearly conveyed. Costume highlights include the rigid tutus of Herodias and the Slave and the sequence of changes for Salome, centred upon her pale pink fringed gown with peacock headpiece. 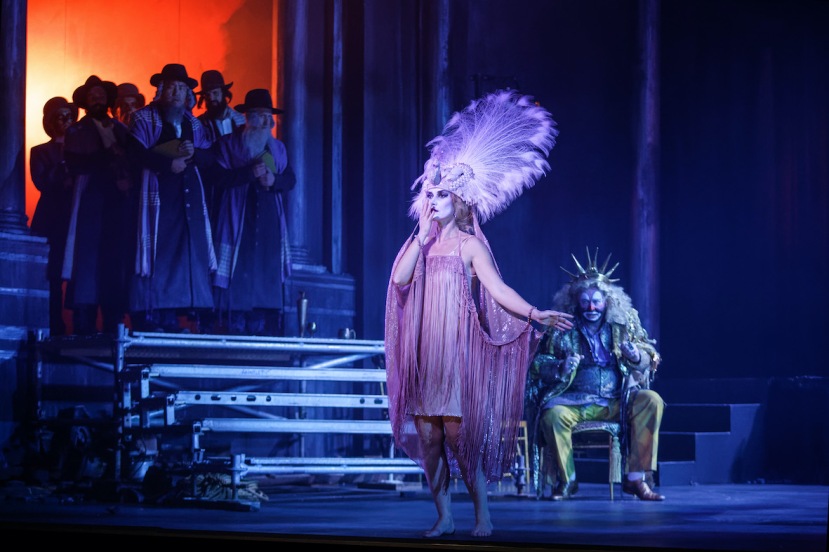 The final noteworthy piece of design is the actual head of John the Baptist. Still bleeding, the head not only covers Salome in blood for a final dramatic image but, at this performance, also almost tripped maestro Mills during the curtain calls.

Miknevičiūtė sings Salome with steely power, gorgeously softened with a seductive, silvery tone. Even with the orchestra at its more powerful, Miknevičiūtė’s voice cuts through, easily keeping audience focus on the opera’s title character. Slinking about the stage, Miknevičiūtė portrays a young woman who knows her power over men and yet dispenses it casually.

Choreographer Elizabeth Hill-Cooper has clearly observed Miknevičiūtė carefully, creating a “Dance of the Seven Veils” that derives fluidly from her stage presence and conveys simmering sexuality without overly intricate movement.

Guest English tenor Ian Storey brings substantial presence to Herod, singing with full dramatic power. Dressed like a 1970s rock god, Storey is hampered in regard to conveying facial expression by his clown face make-up. Given the range of emotions experienced by Herod, this is a poor design choice, much as Storey’s vocal expression compensates effectively for the challenge.

Bass-baritone Daniel Sumegi has a similarly imposing presence as Jochanaan (John the Baptist) and his compelling performance early in the opera leaves a lasting impact on the ensuing drama. In excellent form, Sumegi infuses his vocals with richly burnished darkness that adds significant emotional heft to the storytelling. Sumegi’s off-stage singing from Jochanaan’s cell is particularly expressive and always commands attention.

Contralto Liane Keegan revels in her decadent portrayal of Herodias, the quality of her all too brief vocals leaving the audience wanting to hear more. Dynamic tenor James Egglestone capably carries much of the early drama as Captain of the Guard, Narraboth. Valued mezzo-soprano Dimity Shepherd is an exotic presence as the jester-like Page of Herodias.

Grateful opera audiences can only hope for more the same quality from Victorian Opera in future productions.

The Salome program can be read online.