Inspiring, amusing and genuinely moving, the revival tour of Billy Elliot the Musical arrives in Melbourne with an exceptional cast in peak form.

An outstanding exemplar of music theatre at its most ingenious, the quality of Billy Elliot the Musical derives from the deftly integrated combination of all aspects of production. While songs and book are usually the aspects to receive credit for what makes a good show, the direction, choreography and design are as much a key part of the authorship of the show as anything in the libretto and score.

Adapting his own screenplay (for the 2000 film Billy Elliot), Lee Hall delivers book and lyrics that tell a dramatically charged story of a close-knit community that is suffering in a time of hardship and change. Offsetting the drama is the uplifting journey of young Billy Elliot to embrace his burgeoning talent for dance. Elton John’s electric score includes an instantly enjoyable range of power ballads, charm songs and rousing anthems.

Director Stephen Daldry has conceived a free-flowing spectacle that makes clever use of Ian Macneil’s abstract set design. The fully constructed settings blend aspects of realism in a collage-like combination, in which differing locations can be portrayed by the same pieces of set. Additional pieces of scenery roll on and off with ease, sometimes even manipulated by the cast in character.

The unique work of choreographer Peter Darling may be the most impressive aspect of all, creating a distinct vocabulary of dance and contributing mightily to the storytelling at the heart of the show. Each number unfolds in ways that are as smartly surprising as they are endlessly entertaining.

The standout sequence in terms of exemplifying the integrated approach is the full company number “Solidarity” in act one. Police, striking miners and young female dance students share the stage as Billy gradually progresses in dance under Mrs Wilkinson’s tutelage. As the story hurtles forward, the juxtaposition of characters would be a shambolic mess in a play and basically physically impossible in a film.

Tap dancing dresses join Billy and best friend Michael in the delightful showstopper “Expressing Yourself.” Act one concludes not with a full company finale but with an extraordinary solo from Billy as he expresses his burning frustration in “Angry Dance.” Community spirit and simmering political anger come alive as act two opens with “Merry Christmas Maggie Thatcher.”

River Mardesic joins the fine line up of boys around the world to play the massive leading role of Billy. Mardesic has the requisite dance flair in abundance, completing the package with poise and well-founded confidence in his singing and acting. Mardesic shares the role with Omar Abiad, Wade Neilsen and Jamie Rogers.

Something of a music theatre veteran (at a relatively tender age) and yet rarely seen in lead roles, Lisa Sontag is a revelation as Mrs Wilkinson. Sontag’s voice cuts through exactly as Mrs Wilkinson should – curt, world weary and sadly self-aware and yet impassioned with tenderness when moved. In this current season of Billy Elliot the Musical, the entrenched toxic masculinity of the community is decidedly jarring; Sontag brings dignity to Mrs Wilkinson, portraying a woman we can only hope would go on to be treated with more respect than to be dismissively referred to as “that wife.”

Having played Billy’s brother Tony in the original Australian production, Justin Smith graduates to the role of their father, Jackie Elliot. Smith skilfully shows the broken man’s journey to move from his natural tendency in rejecting the notion of dance to move on to showing great support for his dear son, Billy.

Drew Livingston conveys the fiery passion of Tony, fuelled by the futility of the miners’ strike, which comes at a time of his life that should be filled with optimism. Vivien Davies displays a ready charm as darling doddery Grandma.

Dean Vince crafts a unique characterisation of Mr Braithwaite, pianist and dance lesson assistant to Mrs Wilkinson. Behind tousled, long curls there is an air of mystery to this incarnation of Mr Braithwaite. A beautifully polished dancer, Aaron Smyth shines in the featured role of Older Billy, seen in the stunning sequence in which Billy dances with an imagined incarnation of his future self. 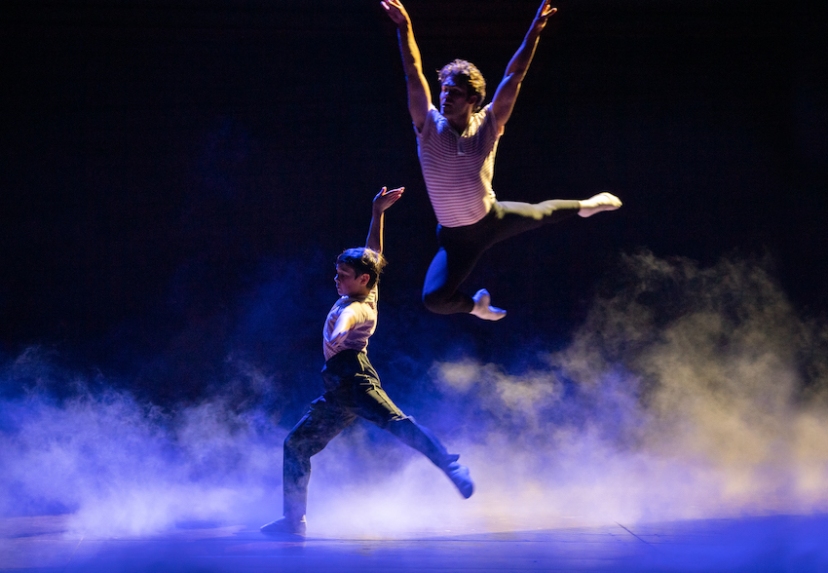 The full company of adult and child performers shine with abundant talent. Th success of the intricate staging is a credit to the clearly evident teamwork of the devoted cast.

Attendance at Billy Elliot the Musical is highly recommended.