There is nothing like seeing a brand new musical you know nothing about. And nothing like seeing a hit, freshly-opened Broadway show in a full house on a Saturday night. Unique subject matter, terrific music by the legendary Cyndi Lauper and an incredible breakout performance by the leading man all contribute to a fun, lively night at the theatre.

In the grand tradition of the Broadway director/choreographer, Jerry Mitchell makes the whole show dance, following up his sensational work on Legally Blonde with basically the same entire creative team here. Numbers like “Sex is in the Heel” and “What a Woman Wants” feature clearly character-driven choreography that is naturally and organically integrated into the show. If there is a essential element that characterizes a Mitchell show, it is the high energy and pure joy of the entire cast, which is quickly and effectively passed on to the appreciative audience.

Based on the little known 2005 film, which in turn was based on a true story, Kinky Boots centres on a young man’s efforts to find a niche market to save his recently-inherited shoe factory. Much humour comes from the clash of cultures when the Northampton factory workers meet the glamorous drag queens set to design stiletto heels strong enough to support a man’s weight. The central bromance between down-to-earth Charlie and fiercely fabulous Lola is believable, involving and moving, brought to life beautifully in the score by the act one duet “I’m Not My Father’s Son” and further enhanced by twin act two ballads “The Soul of A Man” by Charlie and “Hold Me in Your Heart” by Lola.

Master bookwriter Harvey Fierstein keeps the story moving nicely, and avoids the type of corny, obvious gags that plague Newsies. He and Mitchell do a particularly strong job of fleshing out the minor characters of the ensemble. If there is a key strength to the book, it is that Charlie and Lola both suffer an equal struggle with self doubt and identity. The trap would have been for the drag queen to have all the angst while the ‘straight’ guy has it easy.

Lauper’s score is a solid achievement, containing the full mix of ballads and company numbers one could hope for, and providing just enough of a tune to hum on the way out. The quality touch of arranger/music supervisor Stephen Oremus is particularly evident in the glorious ensemble sound, which sounds like about 100 people singing in glorious harmony. 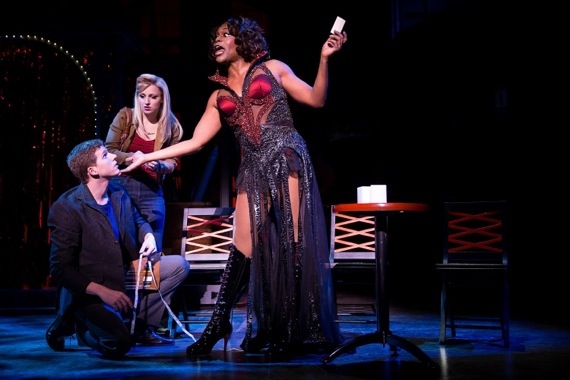 David Rockwell’s scenic design features a cavernous factory with plenty of hidden tricks to create the various locations. The act one closer “Everybody Say Yeah,” which is a highpoint of the show, makes ingenious use of the factory’s conveyor belts. Gregg Barnes goes all out with Lola’s Angels particularly in the final fashion show, and creates, along with hair designer Josh Marquette, a range of witty looks for Lola.

The standout role, however, is newly minted star Billy Porter as Lola. From the moment Porter struts out on stage the energy lifts and never drops back. A true triple threat, and having crafted his profession for twenty years before becoming an overnight success, Porter looks and sounds amazing, his electric performance elevating the entire production to the stirring heights it reaches. This is a performance that will be talked about for years to come, and really must be seen.