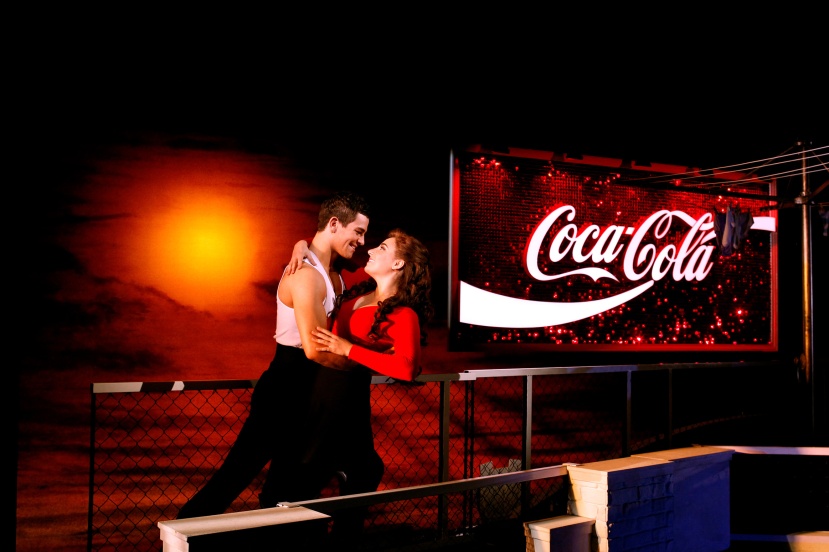 Benefitting immensely from judicious nips and tucks since its out-of-town tryout up north, the more streamlined musical is now around twenty minutes shorter, and all the better for it. Musical purists will miss a unified score, but if this is the chief complaint, the musical will surely survive on its heart and pluck, its energy and passion, its incredibly dazzling designs and its terrifically talented cast.

A student play that became a beloved hit movie, the story comes full circle by retuning to the stage, benefitting from the flair, confidence and ingenuity that creative dynamos Baz Luhrmann and Catherine Martin have accrued in the ensuing years.

The cherished story sees restless young dancer Scott Hasting yearn to move beyond the confines of the strictly ballroom by dancing his own steps. Scott finds a willing accomplice in wallflower Fran, attaining further advantage from the guidance and inspiration of her passionately rhythmic family. While malevolent dancesport president Barry Fife plots to eradicate the nightmare of original steps, Scott and Fran’s love slowly blossoms. 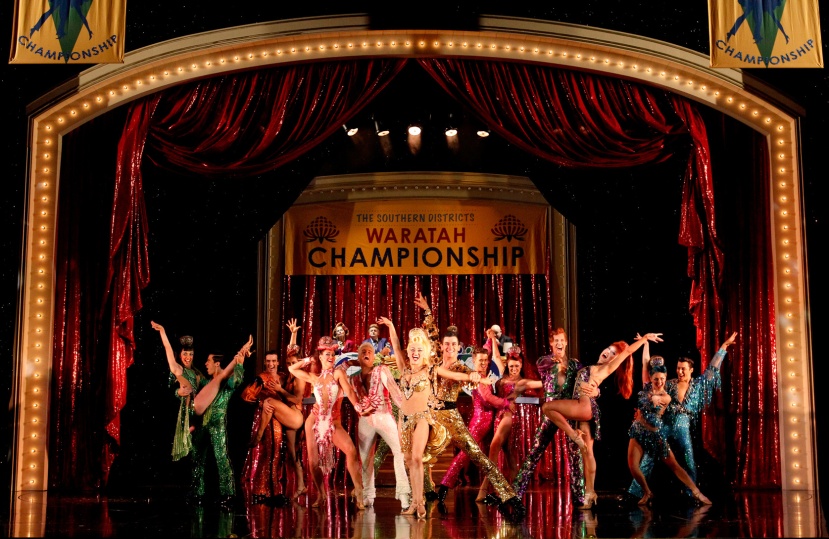 The production values imbued by Bazmark and Global Creatures are nothing short of world class. The only recent current international musical that comes close to the scope and quality of design is the West End’s Charlie and the Chocolate Factory. And there is no way you would ever see forty performers on stage in a Broadway show.

Multi Oscar-winner Martin’s skills as a theatrical designer are quite extraordinary. Her delectable ballroom gowns not only feature a rainbow of vivid colours, but also sway and bob with fluid beauty. This explosion of colour is cleverly contrasted by the creation of an entire second company of characters, with their subdued palette of blacks and browns, when we meet Fran’s extended family and friends. Sprinkled with intricate, witty details, Martin’s sets are as spectacular as they are fully functional and effortlessly adaptable. 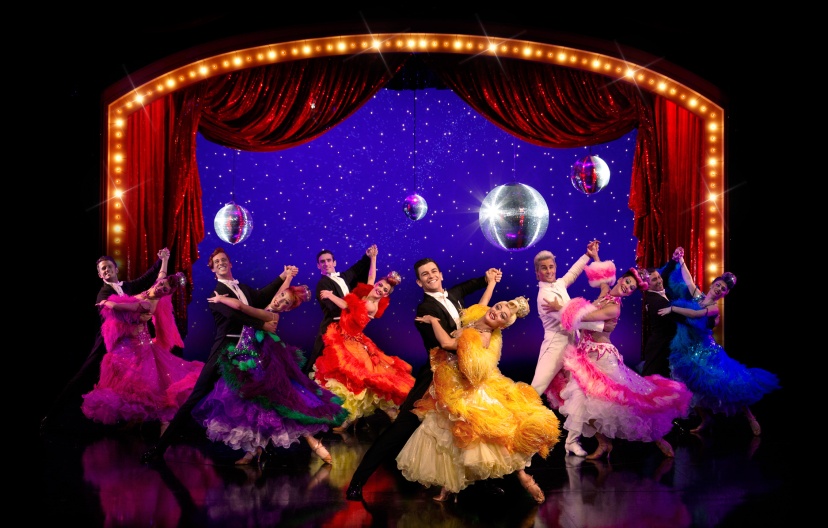 Working from an intricate mythology of his own wondrous creation, Luhrmann has created a cornucopia of colourful characters, which, despite his tendency towards breathless excess, are all mostly grounded in identifiable, empathetic reality. Energy is kept sky-high, and storytelling is sharper than before, thanks to a stronger integration of music and dialogue. For example, “Time after Time,” in which Scott and Fran’s dance and personal relationships begin to take root, is as strong an integrated sequence as can be found in any modern musical.

Choreographer John O’Connell has worked beyond the usual requirements for music theatre choreography, threading dance throughout the entire show. Dance, in a multitude of forms, is as vital to the story as the title suggests, and there seems to be barely a moment without movement. When all the couples really take flight, it is almost impossible to decide where to look, such is the uniform quality of the dance and the dancers.

Orchestrator Elliott Wheeler and musical supervisor Max Lambert have done their best to bind the music into a cohesive score. While the overall sound of the music is quite consistent, the lyrics vary in clarity. Sound design, by Peter Grubb, is richly detailed, but it is hard to tune one’s ear to some of the words. Barely given two seconds’ break all night, music director Daniel Edmonds handles the wide range of styles and tempi with consummate flair.

The overall staging is notable for the particularly strong collaboration between the creative team. The replication of cinematic dissolves and crosscuts is achieved by the combination of tight scripting, rotating scenery and flowing curtains, fast costume changes, flowing music, strong character work, continuous dancing and the superb work of lighting designer Hugh Vanstone, whose masterful work draws the eye with pinpoint accuracy.

A perfect example of this seamless creative alliance is the brilliant act two sequence that begins with “The Looks, The Charm,” in which the devious Barry Fife spins Scott an elaborate furphy about his parents’ past. From a simple setting at the dance school, a heightened world pours forth, featuring infectious music, cute dance steps, multiple mirror balls, outrageous characterisation from the cast’s best actors, deliberately over the top costumes and even bigger wigs, before the scene melts back to the dance school. 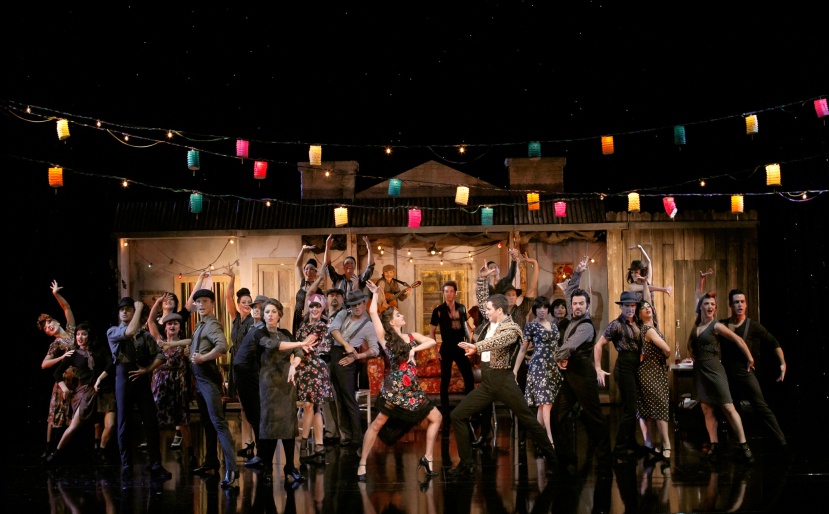 In the star-making role of Scott, fresh-faced young triple threat Thomas Lacey proves an engaging and endearing leading man. Lacey is confident without being brash, a highly capable dancer without being showy, and his sweet tenor voice (which has significantly improved) is a pleasure to hear. Scott’s big I wish number, “Shooting Star,” is a great showcase for Lacey’s talents, in that it features the unique twist of switching from words to dance halfway through.

Just as Fran grows into her talents in the story, Phoebe Panaretos has blossomed and thrived in the role. Her beauty enhanced by an inner joy of being on stage, Panaretos impresses with her lovely voice and graceful dance skills, and her performance is capped off by the perfection of her comic timing.

Lacey and Panaretos enjoy solid chemistry, and are clearly comfortable performing with each other. Their commitment and focus wards off any danger of cheesiness from the central love story. The humour of Fran’s first attempts to dance with Scott is delightful, as is Scott’s hurt pride when Fran’s family laughs at his rhythm. If a few of the scenes in the show still seem a little superfluous, it is partly because Scott and Fran’s are so enjoyable that distractions or interruptions are unwelcome.

Heather Mitchell gives an extraordinary performance as Scott’s mum, Shirley Hastings, a woman who seems to be barely held together by her last few remaining nerves. Drew Forsythe is heartbreaking as despondent ditherer Doug Hastings. Forsythe and Mitchell are superb as their flamboyant younger selves in “The Looks, The Charm.”

Fernando Mira as Rico and Natalie Gamsu as Fran’s Abuela bring plenty of warmth and heart to the tale, their gentle underplaying contrasting very neatly from the colourful circus at the Kendall Dance Studio.

Robert Grubb clearly relishes the juicy role of lecherous, self-serving Barry Fife, playing him not as a villain but just as a man who staunchly believes he is right.

Laine Hastie as Scott’s little sister Kylie Hastings and Campbell MacCorquodale as her partner Luke show maturity beyond their years in comprehending the heightened, jocular tone of the show and matching the adults’ achievements with lashings of verve.

Bob Baines gives strong support as Shirley’s longtime dance partner Les Kendall. There is, in fact, a veritable army of performers giving strong support and having the time of their lives along the way: the redoubtable Rohan Browne as drunken buffoon Ken Railings, Mark Owen-Taylor as JJ Silvers, Tyler Coppin as Terry Best, Sophia Katos as Liz Holt, Nadia Coote as Tina Sparkle, Andrew Cook as Wayne Burns, and the list goes on. When the full company is assembled for curtain calls, the character created by each and every cast member can be clearly recalled.

I missed the official opening night of Strictly Ballroom due to a trip to London. As I sit on the plane writing this review, I find it hard to imagine that I will see a more lavish, heartfelt, uplifting musical on the West End. Perhaps not until Strictly Ballroom moves there itself.

Strictly Ballroom the musical plays at Her Majesty’s Theatre, Melbourne.

View photos of Strictly Ballroom on stage from the Melbourne media call.