Victorian Opera: The Grumpiest Boy in the World review

Demonstrating yet again their absolute commitment to both new works and young singers, Victorian Opera presents the world premiere of the delightful new opera The Grumpiest Boy in the World.

So enjoyable are the music, design and performances that, if there is one complaint about this wondrous piece, it is that it is just too tantalizingly short. The 45-minute running time flies by in a whirl of melody and creative invention. The design elements alone could support a production three times the length.

The theatrical equivalent to reading a very satisfying children’s book, The Grumpiest Boy in the World has a three-act structure and an allegorical story for a straightforward life lesson. Living in his beige, middle-class home, nine-year-old Zachary Briddling is frustrated at his sheer normalcy. His muffin-baking mum and Age-reading dad display his crayon drawings on the fridge, and that is about as far as his kingdom stretches.

Indulging in flights of fantasy, Zachary travels to a world of unusual creatures only to find more normalcy and acceptance. Winning a Grump-off in Grumptown, Zachary finally has a smile on his face when he realises he is the grumpiest boy in the world.

Zachary’s smile is not the only ironic element of Grumptown, as composer Joseph Twist blesses the scene with most attractive and harmonious music of the opera. The entire score is, in fact, wonderfully accessible, being more of the pleasantly melodious variety than the abstract soundscape variety that often plagues modern opera.

Twist’s music sounds particularly good thanks to calm, confident conducting from Simon Bruckard, who is a Developing Artist with the company. On several occasions on opening night, young singers looked to Bruckard for their cues and found themselves in very secure hands. Bruckard leads nine talented players from Orchestra Victoria, with Lara Wilson on percussion adding welcome colour to the more fanciful sequences in the score. 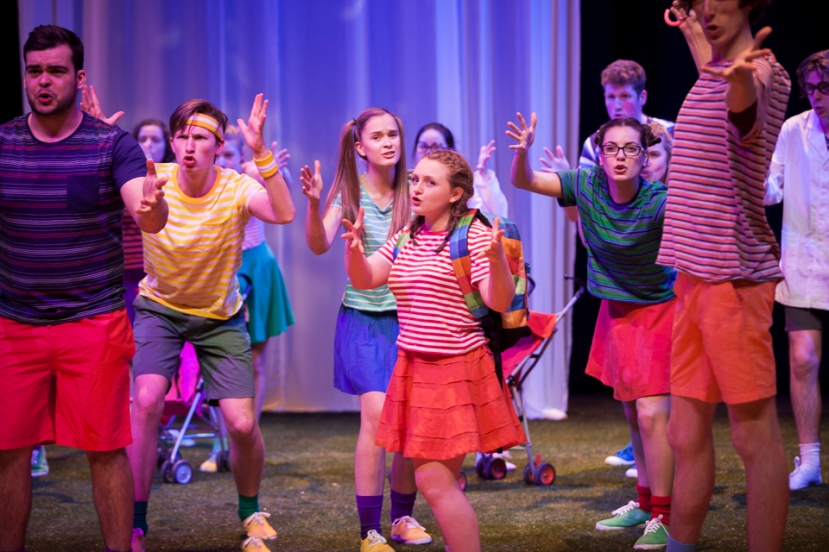 Based on his successful play, Finegan Kruckemeyer has fashioned an economic libretto that engages the audience through the familiarity of the first scene then has them on board for Zachary’s fanciful adventure’s beyond his safe suburban home. While the opening scene is well explored, the subsequent fantasy scenes really could do with some more fleshing out, as there is scope for more arias, duets and musical scenes involving the various creatures and characters that pop up on Zachary’s journey.

Zachary carries the brunt of the singing, and, fortunately, young performer Jacob Lawrence is more than up to the task (Alastair Cooper-Galec alternates in the role.) Possessing a smooth, clear voice of the baritone register, Lawrence gives a centred, serious performance as Zachary, conveying the inner turmoil of the boy through his eyes. On stage and singing for the entire show, Lawrence proves a capable, unflustered performer whose unshowy style brings the audience towards him.

In a similar vein, director Cameron Menzies keeps all of the action animated but well clear of over-the-top childishness. Menzies can fill or empty the stage in seconds, as the large, well-rehearsed chorus come and go with yet vagaries of Zachary’s imagination. The story is told in clear, broad strokes that easily accommodate young audience members while still respecting the intelligence of adults.

On par with the excellent music and libretto, Chloe Greaves’ designs are a wonder to behold. It is a sign of the importance that the company places of this type of work that the design is so fully realised. A space usually configured without a proscenium arch, the Merlyn Theatre is set up here to have full black wings and tab, allowing magical entrances and scenic dissolves. As giant white translucent cloths glide by, representing the pages on which Zachary draws his imaginative world, Greaves provides a giant, a chorus of tiny munchkins, a pair of colourful birds, two-headed monkeys on wheels and much more.

The integration of design into the action illustrates the level of collaboration that has clearly occurred between Greaves and Menzies. Joe Mercurio’s lighting design enhances Greaves’ work, also adding special effects to aid the story telling.

Special mention goes to Rhian Tuohy’s lovely singing and character work as Dot (above). Lizzie Barrow also makes an impact as a colourful Bird who gives a cheeky Violetta-like run of ornamental cadenzas, showing herself as a potential diva-in-the-making.

The large (30+) chorus is extremely well prepared, singing with uniform sweetness of tone and clarity of diction. Their energy and focus are likewise evenly matched, and the multitude of scene changes completed by the cast run like clockwork.

The Grumpiest Boy in the World is family entertainment of the highest calibre.

The Grumpiest Boy in the World plays at Merlyn Theatre, CUB Malthouse, Melbourne until 4 October 2015

The Grumpiest Boy in the World program can be read online

Jessica Pratt in I Puritani

Oskar Hillebrandt in The Flying Dutchman

Victorian Opera has announced their 2016 season