A tremendously talented young cast and well-realised direction allow original Australian musical The Gathering to be seen in its best possible light.

While the youth of the cast is initially deceptive, a glance at the program reveals each of the six performers to be recent Performing Arts graduates. The six are all solid actors, but it is their singing voices that are really exceptional. As Gen Y actors in a show by Gen Y writers, the cast members suit the open minded, confident characters, and the new show has a welcoming accessibility to it.

Streamlined to a compact 75-minute running time, The Gathering is consistently entertaining and engaging. An undercurrent of tension is introduced almost immediately, and the intertwined themes of relationships, identity and regret, plus a hint of the supernatural, provide plenty of dramatic material for the six well drawn characters.

Having returned as mysteriously as he disappeared five years earlier, Tom has gathered his school friends in an attempt to pick up where he left them. Tom’s past is the central mystery, but each character brings baggage that they are attempting to lessen while navigating the choppy waters of young adulthood.

Belinda Jenkins and Will Hannagan have worked together to craft the book, music and lyrics for The Gathering. Keeping the pace snappy by judiciously keeping book scenes brief, their songs are a real attraction. With a particular flair for power ballads, the pair also proves adept at writing ensemble numbers that drive the action. Their strength with lyrics lies with having a second, or third, character sing the same verse with only slight tweaks to provide a fresh meaning. Jenkins and Hannagan have a musical voice that is well worth cultivating, and future endeavours are now highly anticipated.

The success of The Gathering owes much to the confident work of director Chris Parker. Sparks continually fly between the characters, and storytelling is crisply energetic. Effective use of the flexible playing space allows various locations to be created with ease.

Designer Daniel Harvey conveys the creaky age of the house with a collage of mismatched carpet underfoot. The stained rear wall of the fortyfivedownstairs is the perfect backdrop. Characters are dressed comfortably and realistically, each clearly showing aspects of their personality in their carefully chosen attire.

Musical direction by Daniel Puckey is excellent, giving the new musical an assured, natural sound. A band of five, including Puckey on piano, plays the music with flair. Given that the singers cannot see conductor Puckey, vocal preparation has obviously been thorough, as cues are picked up with relaxed ease.

Joel Granger is an inspired choice to play Tom, his handsome face able to flick from rosy cheer to deep pools of pain in a heartbeat. Granger brings a largely inscrutable front to Tom’s secrecy, deftly playing down the melodrama of the situation to ground the drama in realism. 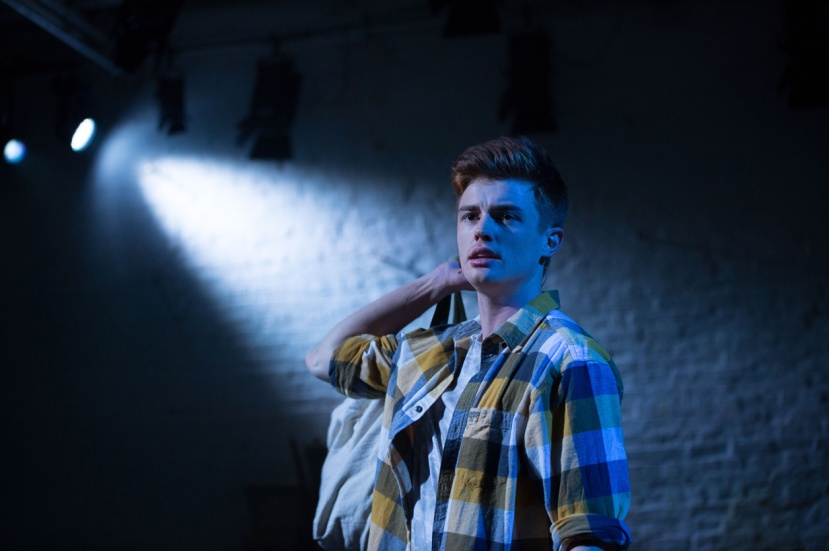 Shannen Alyce Quan plays Tom’s sister Kelly with a unrelentingly fierce edge. Quan has a superb singing voice, belting with unflagging power. It is a credit to Quan’s performance that she reveals the pain behind Kelly’s aggressive front, bringing additional dimensions where a lesser actress may have been one note.

Hannah Sullivan McInerny also delivers powerhouse vocals, singing with a pure and unwavering belt. As new age-infused Daisy, McInerny provides some welcome humour, expertly delivered as being quite serious to the character. Daisy has a history with Joe, a prickly situation that McInerny often conveys nonverbally.

Daniel Cosgrove, as Joe, portrays the tension between adult responsibilities and youthful abandon. Cosgrove projects a masculine presence, undercut with a vulnerability related to his crumbling relationship with Daisy.

Olivia Charalambous maintains a perky, playful presence, portraying a young woman who masks her insecurities behind a pretty in pink façade. Blessed with beautifully expressive eyes, Charalambous nails the furtive longing looks Mia throws at Tom, bringing the character’s feelings to the surface in poignant duet “If Ever I Would Run.”

Providing a surge of energy with his late arrival, proven young performer Daniel Assetta gives another terrific vocal performance as Luke. It is refreshing to see a character who is gay without this having any significance to the story. Even more refreshing is Assetta’s unflinching portrayal, which offsets moments of arch behaviour with a natural masculine confidence.

Musical theatre supporters, and younger musical fans in particular, are encouraged to seize this opportunity to see a strong production of a new Australian work.

The Gathering plays at fortyfivedownstairs, Melbourne until 11 December 2016.