A slow burn, Banquet of Secrets’ ultimate success is due, in no small part, to the dazzling talents of its charismatic quartet of performers. 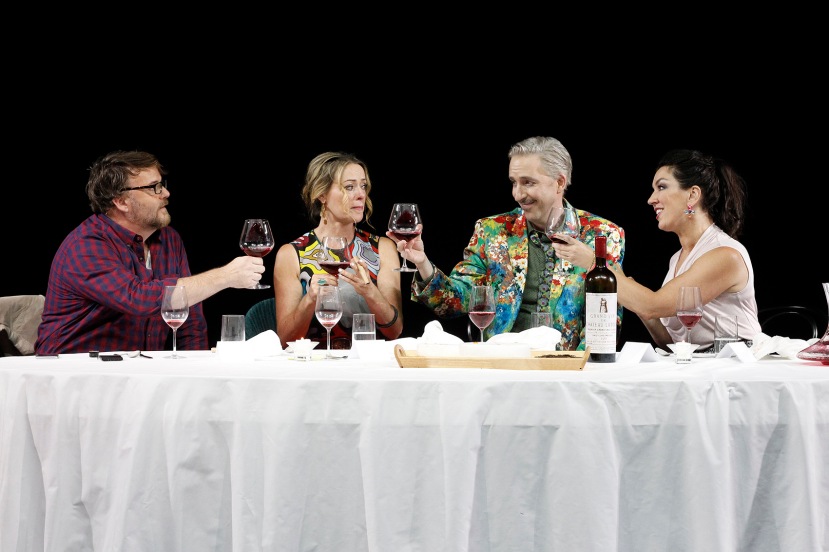 Billed as a musical, the new work really only differs from opera in that the singers wear body mikes and there is a smattering of dialogue. The non-naturalistic ebb and flow of reality and dreams makes the piece a natural fit for the opera stage.

Like the four central characters, the composers of Banquet of Secrets have been friends since university. The close relationship between Steve Vizard and Paul Grabowsky seems to have facilitated the creation of a musical that is far more accomplished than many a first time effort.

Grabowsky’s score is mellow, subtle and seductive, switching gears easily from haunting arias to perky comic numbers. With little more than the occasional surreptitious nod of the head, Grabowsky leads four fellow musicians and the four singers from the piano. The music is clearly very well rehearsed, with musicians and singers alike performing as if the work is already in their DNA. Dreamy harmonies are a highlight when the four singers all take flight at once.

Vizard gives a nod to Sondheim’s work, particularly Company, in that the characters’ lyrics are peppered with their own unique vocabulary, as befits their career, lifestyle and moral philosophy. In a very funny sequence, Vizard takes an extended swipe at the utterly pretentious menu descriptions used by upmarket restaurants. Social media obsession is also explored, in a frisky, well-timed comic number that breaks up the drama of the confession of secrets. 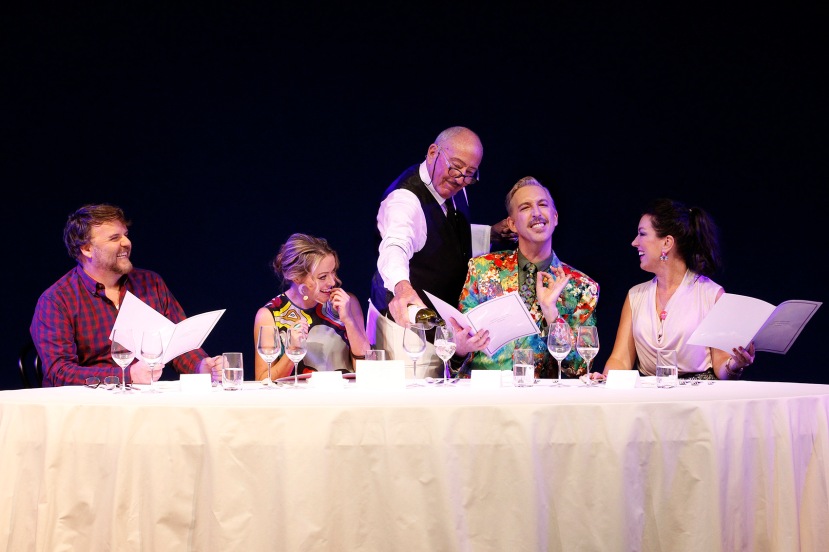 The premise of four long-time friends each sharing a deep secret over their annual dinner may sound somewhat simplistic, but the conceit is given depth through the immersive musical numbers that accompanies each confession. Time melts away, as do the dinner and the restaurant itself. The combination of Vizard’s well-conceived secrets, Grabowsky’s hypnotic music, Roger Hodgman’s confident direction and the excellent performances from the cast results in a number of spellbinding sequences.

If there is a slight weakness in the book, it is the assumption that just identifying with the situation of a reunion of friends is enough to hook the audience. After an excellent opening company number, each of the leads has a song to establish their character but there are no “I wish” elements and hence there is no drive or subtext or tension for the first third of the 90-minute show. The fact that the show ends with the audience so well involved is a testament to the strength of the remaining two thirds of the material. 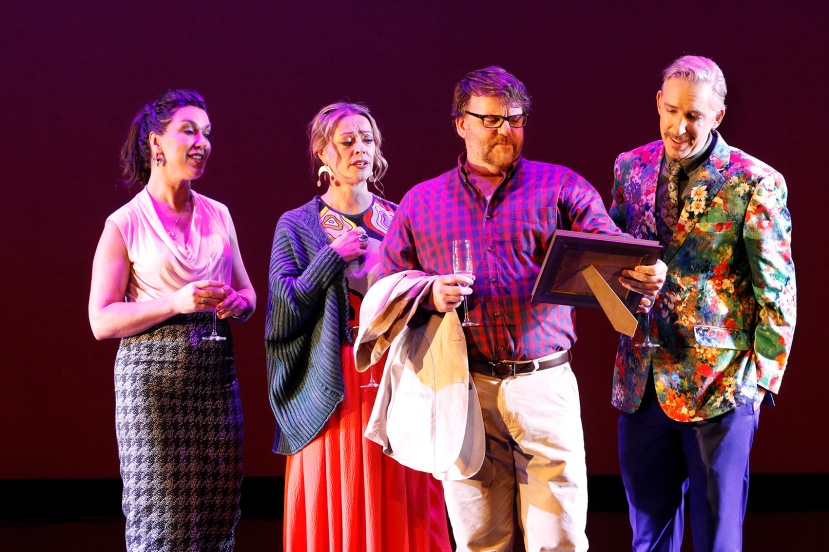 With a season of only five days, the lighting design (Matt Scott) and scenic design (Scott and Christina Smith) are relatively simple but very effective. A glossy black tarkett over the Playhouse stage floor reflects the luscious lighting of the full rear wall. A large, tilted overhead mirror reflects the progress of the delicious courses of the meal (also symbolically representing the mirror the characters are holding up to their lives). Flashes of lightning punctuate the scenes as time passes throughout the banquet.

Smith’s costumes represent each character quite well but are not particularly attractive or cohesive in design. 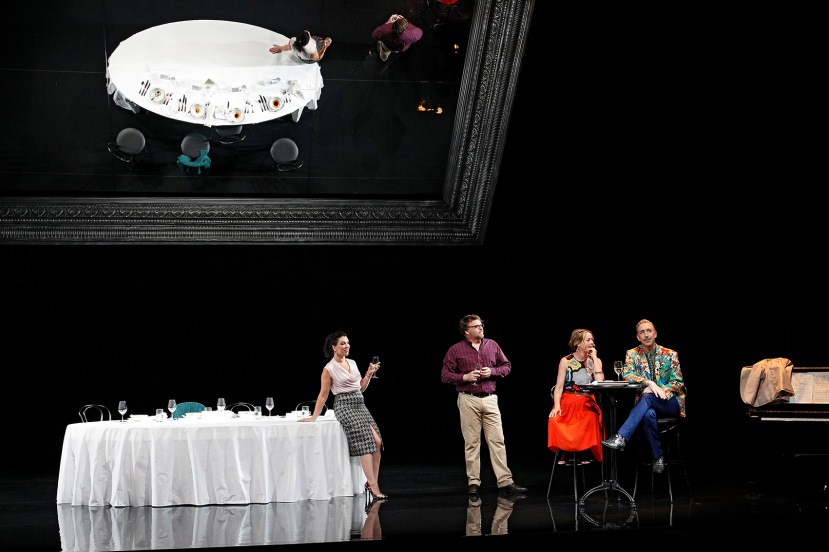 Playing the four long-time friends, Antoinette Halloran (Mia), Dimity Shepherd  (Rose), Kanen Breen (Jean Pierre) and David Rogers-Smith (Drew) enjoy terrific chemistry, successfully conveying a depth of friendship that ignites quickly despite the gaps between meetings and in which the shorthand, foibles and shared experiences are deeply imprinted. There is palpable warmth and camaraderie between the four. Hodgman is clearly behind much of this, but the strong working relationships of the group add a level of enjoyment that cannot be taught. Perhaps from the fact that opera involves learning to sing at the same time as other singers, each of the four are also highly adept at energetically talking at the same time, a knack that is put to good use in creating energy and a sense of excitement.

Halloran imbues Mia with just enough vulnerability to prevent the high-flying socialite’s vanity to be off-putting. Shepherd garners more sympathy but challenges the audience rather than indulging in their affection.

With immaculate diction that brings to mind the great Dennis Olsen, Breen cultivates a polished air in Jean Pierre that is offset with an underlying sense of unease. Rogers-Smith slowly reveals why the goodhearted Drew seems plagued by an encroaching sense of numbness. 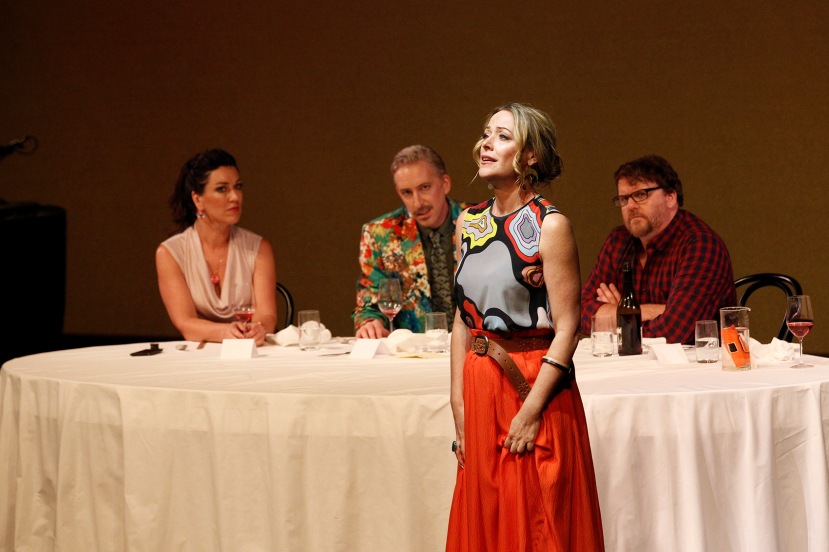 Banquet of Secrets may not reach the crowd-pleasing heights of Ladies in Black, but theatregoers are set to find greater depth and more lasting, thought-provoking material in this show.

The Banquet of Secrets program can be read online.